Melbournian resident, Doreen McManis, is no stranger when it comes to style, having spent a decade working in Haute Couture fashion. Now the 83 year old from Brighton, Victoria, has proven she is as stylish as ever, after being crowned Specsavers' Spectacle Wearer of the Year and winning herself an all-expenses-paid trip to Hollywood to meet with the competition's star judge and glasses wearer, Eva Longoria.

The Victorian beat hundreds of entrants to secure the prestigious title, which involved a nationwide search by Specsavers for the country's most confident and stylish spec-wearer. The competition's judges, Hollywood actress Eva Longoria, fashion designer Alex Perry, and L'Oréal Professionnel Stylist Brett Albury, praised Doreen for her standout spectacle style and ability to make her frames into the ultimate fashion accessory.

Commenting on her win, Doreen said, 'I am thrilled to have won a competition that celebrates confidence in glasses and am particularly proud that someone of my age is able to be an ambassador for Specsavers! I love looking trendy and having that -wow factor', which is why my daughter and I are always popping into Specsavers to check out their latest ranges."

'I am so excited for my trip to LA to meet Eva Longoria – it feels like I'm the movie star! I can't thank Specsavers enough for this wonderful opportunity."

As one of eight finalists shortlisted for the title last month, Doreen flew to Sydney for a professional photoshoot, where she was treated to a makeover and spec style consultation with judges Alex Perry and Brett Albury. The judges were smitten by Doreen's confidence, spirit and passion for good spec-style during her time at the photoshoot, which was captured in her photographs.

On selecting Doreen as the winner, Eva Longoria commented: 'The winner of the Spectacle Wearer of the Year competition is someone who sees their glasses as part of who they are; someone who's spec style is a reflection of their personality. Doreen embodies all this and more! When looking through all the entries, it was clear to me that Doreen absolutely loves the way her glasses make her look and feel."

Designer, Alex Perry, added, 'Doreen is extremely charismatic, and a woman who prides herself on her style! She is cheeky and personable, making the task of picking the winner for the Spectacle Wearer of the Year competition a little easier. She is incredibly deserving of this title, I couldn't be happier for her."

As the winner of the prestigious title of Spectacle Wearer of the Year, Doreen and a friend will be treated an all-expenses paid trip to Los Angeles to meet Eva Longoria, who is currently on set filming her latest TV show, Hot and Bothered. Doreen will also receive a L'Oréal Professionnel prize pack valued at $500 and a year's supply of new designer glasses from Specsavers - ensuring she continues to be Australia's most stylish spec wearer!

For more information on the competition visit: loveglasses.specsavers.com.au. 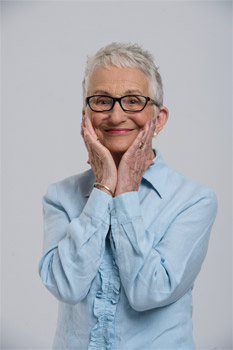 Question: How did it feel to be crowned Specsavers' Spectacle Wearer of the Year 2015?

Doreen McManis: I am thrilled to have won a competition that celebrates confidence in glasses and am particularly proud that someone of my age is able to be an ambassador for Specsavers! I was totally overwhelmed when I found out I was crowned the Specsavers Spectacle wearer of the Year 2015, for once in my life, I was lost for words!


Question: Was it even more special to know Eva Longoria picked you?

Doreen McManis: It was very special to know that Eva Longoria was a part of the judging panel that picked me to be the Specsavers Spectacle Wearer of the Year – she has great individual style and confidence – I am honoured that Eva and the rest of the judges chose me out of the hundreds of entries!


Question: What inspired you to enter the competition?

Doreen McManis: My granddaughter and I went to our local Specsavers Brighton store, as we were looking for a pair of specs that would give me the -wow factor' for a family wedding – we always pop into our local Specsavers store to check out the latest ranges. I love looking trendy and I see my glasses as being a reflection of my personality. One of the Specsavers Brighton team members suggested that I should enter the Spectacle Wearer of the Year competition after I picked out my new frames and she gave us all the details on how to enter, that evening my granddaughter and myself sat down and filled out the application form and the rest, as they say, is history!


Question: How was the Specsavers photoshoot?

Doreen McManis: The Specsavers photoshoot was great – all the finalists met in Sydney and we all got on like brothers and sisters! We were treated to a finalist's photoshoot where I got advice from a stylist, make-up artist and a hairdresser – they helped me find my own personal style! It was a very special day for me, I was thrilled with my final look.

Doreen McManis: Alex Perry was really lovely, we clicked instantly – when I was getting my pictures taken with Alex the photographer had to ask us to stop chatting as we were holding up the photoshoot!


Question: What are you looking forward to most about the trip to Hollywood?


Question: Can you tell us about your past in Haute Couture fashion?

Doreen McManis: Before I was married I spent a decade working in haute couture fashion with a well-known Melbourne designer, we created beautiful gowns for the socialites of Melbourne. It was an amazing experience where we created individually designed handcrafted gowns, during this time I really honed in on what styles worked for myself also.


Question: What do you look for when choosing glasses?

Doreen McManis: My one piece of advice for older spectacle wearers is that you don't have to be young to make a trendy pair of glasses work for you! I see glasses as being a reflection of your style and personality, I am proud to be a winner of competition that celebrates confidence in glasses and I am particularly proud that someone of my age is able to be an ambassador for Specsavers! I love looking trendy and having that -wow factor' and I think one way to achieve this is wearing a pair of frames that suit your face.

Specsavers and The Fred Hollows Foundation have joined forces with multi-award winning artist and actress,...

Specsavers is partnering with The Fred Hollows Foundation to raise much needed funds to help close the health...