Danged Black Thing is an extraordinary collection of stories about love and migration, gender and class, patriarchy and womanhood, from a remarkable and original voice. Traversing the West and Africa, they celebrate the author's own hybridity with breathtaking sensuousness and lyricism. Stories explore with power what happens when the water runs dry – and who pays, capture the devastating effects on women and children of societies in which men hold all the power, and themes of being, belonging, otherness. Speculative, realistic and even mythological, but always imbued with truth, empathy and Blackness, Danged Black Thing is a literary knockout.

About the author
Eugen Bacon is African Australian, a computer scientist mentally re-engineered into creative writing. Her work has won, been shortlisted, longlisted or commended in national and international awards, including the Foreword Book of the Year Awards, Bridport Prize, Copyright Agency Prize, Australian Shadows Awards, Ditmar Awards and Nommo Awards for Speculative Fiction by Africans. Her novella Ivory's Story was shortlisted in the 2020 British Science Fiction Association (BSFA) Awards.

The short story is my honied spot. Creating a miscellany of literary short stories is thrilling. In Danged Black Thing, I sought to write the 'other', betwixt, hauntings, unlimited futures. I sought something black, speculative.

As an African Australian who is a mother, a scholar, an artist, a writer, a reader, a friend, a peer, a mentor… I am the self and 'other'. I am a sum of parts. I am many. I wanted to write my roots, hybridity.

My stories naturally evolve as betwixt, a sum of cultures. They're stories of inhabitation, multiple embodiments, multiplicities… in exploratory writing that bends genre. 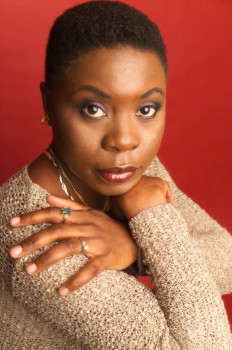 I have always been curious, speculating about situations, events, problems, possibilities. With increasing focus on Black Lives Matter, I wanted to write stories that pay attention to black protagonists. I wanted to hero black people in stories of angst, promise, even warning.

The dominant motif in my stories is a person's relationship to someone, someplace, something"even an entity. I explore sentience: what it means, really means, to be, to become, to belong.

In Danged Black Thing, these themes come to life in stories such as 'Simbiyu and the Nameless'" black speculative fiction on the 'other' and betwixt, where a boy's encounter with a dark mystical thing brings him fortune as he loses himself.

'A Pod of Mermaids' is a collision of worlds and mythology, and casts its gaze at mostly women and children haunted by patriarchy. It borrows from Norse mythology, where Loki's wife, Boda, flees Asgard from her husband's cunning, but must face the tyrannies of Earthlings in Idi Amin, Nquema and Mbasogo"what unlimited futures might await?

'When the Water Stops' comes with its dire warning on climate change. What happens when the water runs dry"who pays?

Inside such sombreness is levity, a playfulness even. The theme story, 'Danged Black Thing', written in collaboration with E. Don Harpe is atrociously funny"at least to me.

Another of my favourite stories is written in collaboration with Andrew Hook. 'Would you… might you…' I nervously broached this author of slipstream fiction (think of it as the literary strange), with an idea to write a short fiction together. What started as 'An Unnamed Story' became 'Messier 94'"you'll just have to read it now, don't you?

But here's an excerpt to 'Phantasms of Existence':

RAW REACHED into the dishwasher with a dinner plate, and her waters broke.

It wasn't the warmth and shame of weeing on oneself. This was a welcome pop, then a trickle, finally a gush that wouldn't stop down her legs.

She knew from the ultrasound he was a boy. 'Oh, oh, three legs,' said the nurse. 'Look at that heart, he's a strong one!'

She didn't jinx it by naming him before he saw the world – who did that?

But from that moment, Raw started seeing her son in broad daylight. He was brown and lashy, the softest curls on his head. He looked just as she'd imagined her baby would be, and her heart swelled. (p.40)

I can't say how grateful I am to Transit Lounge Publishing for this collection. I'd been trying like forever to get the publisher, Barry Scott, to accept a manuscript from me. His silences and rejections were always generous… considerate. When I sent him the collection, I jokingly (and seriously) said, 'Read the first two stories and the last two stories, and tell me you don't like them.'

He replied with a contract.