Pamela Vanderson – can carry up to eight people and was born after Dan and Maz wanted a show car that could accompany them on their various adventures. After asking listeners in July for their suggestions, she was chosen, and equipped with neon lights, animal print covered seats and a unique 'ahooga" horn! She even has her own voice, on twitter @PamVanderson

Like any great vehicle, Pamela Vanderson is unmissable, wrapped in hilarious Dan and Maz imagery to ensure she stands out on the road.

Each weekend, Dan and Maz will create a recap video from that state, which will be live on Dan and Maz's website and at www.ambipurroadtrip.com.au, to ensure listeners can capture all the action.

Ambi Pur Brand Manager, Suraen DeSilva said 'At Ambi Pur we know all too well that at any moment, your car could be hijacked by bad smells. Our challenge to Dan & Maz with the Ambi Pur Road Trip around Australia is to make sure Pamela Vanderson DOESN'T GIVE ODOURS A RIDE. We can't wait to see how she will stand up to the 30 day odour free challenge regardless of where she goes or what she gives a ride to." 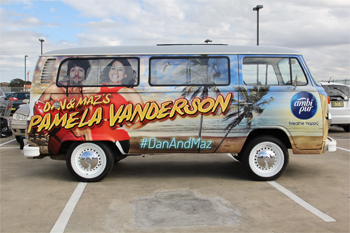 With registrations open at www.danandmaz.com, the car will be available for six weeks, travelling to six different locations across Australia - Sydney, Brisbane, Melbourne, Adelaide, Perth and Newcastle.

Interview with Dan and Maz

Question: When did you two decide you needed a show car?

Dan: We were actually reminiscing before, we went on a road trip…

Maz: The trip to the snow!

Dan: We went to Mount Buller and we had to hire a van and we all felt very annoyed that we had to give the van back at the end of the trip so we decided to create our own show car and it all ballooned out from there.

Question: How did you come up with the idea of a 1974 pimped-out Kombi Van for the show car?

Maz: We asked our listeners what their suggestions were and they voted. It was a popularity contest. They had some other fantastic suggestions.

Dan: I was very front foot on the back of it being an Army Tank but that got shot down quite quickly.

Dan: A Kombi was the car that most people were suggesting and I think that's because I look like Shaggy from Scooby Doo and the Kombi was his car of choice.

Maz: I think it's because a Kombi is a practical car with enough room for a bunch of mates which is what it was more about.

Dan: So there are two theories then.

Question: Who has already been lucky enough to take a ride in Pamela Vanderson?

Dan: We don't make any decisions ourselves. We leave it up to everyone else and put it to a vote.

Maz: We had a lot of social interaction on Twitter with the name and we had so many of the funniest puns tweeted. Again, it came down to a popularity contest of what our listeners wanted to name the van and Pamela Vanderson won!

Dan: We thought Pamela Vanderson would be a good name because at the very least David Hasselhoff would be able to endorse it but even the Hoff is a bit hard to get a hold of.

Dan: The name has backfired a little bit as when we broadcasted the launch at Bondi Beach people were calling up the pub we were at and asking 'Is it true that Pamela Anderson is going to be there?" all we said was 'We don't know if she's going to be there, or not, but we can confirm our van, Pamela Vanderson will be there".

Question: What events have you been taking the lucky listeners to?

Maz: We picked the cast of The Inbetweeners up on the Gold Coast to take them to the red carpet premiere of their movie The Inbetweeners Movie 2 which was pretty awesome; it's a fun way to meet celebrities! We took a bride to a wedding and a groom to his wedding in Newcastle. Lots of footy teams have taken a ride.

Maz: A shopping trip for the girls! There was a group of girls who go shopping in Sydney, once a year, for an epic credit-card-max-out-session and we dropped them in Darling Harbour at the shops.

Dan: Sometimes it's just mates who want a lift!

Question: Was the first trip to the Hanson concert?

Maz: Yes! That feels like a year ago… But yes, correct.

Dan: Hansen was one of the names that was suggested, for the van.

Question: Dan, this is your first car, how does it feel to own a car?

Dan: I don't have a drivers licence, I am still on my L's at the age of 29 so this is my first ever car and I realised that halfway through which is why I took it a little bit too serious with all my suggestions. My favourite being that we (well I got someone… again we didn't do it)

Maz: We are good at delegating.

Dan: An amazing listener designed -My Family Stickers' with a picture of me, Maz and our show pet, spider, Nikki Webster. These are the things that you get to do when you own your own car! Now if I ever do get my own car it's probably going to be a real anti-climax as we have our horn and our Dan and Maz Lego figurines on the dashboard.

Maz: When we have been picking people up they have been giving Pamela  Vanderson presents and writing cards for her, which is hilarious.

Dan: We came very close to getting the personalised numberplate -DANMAZ' until we found out they were already bought by Dandenong/Berwick Mazda. We have the next best thing which is -D4NM4Z'.

Maz: From a distance it looks like -DANMAZ' but up close -D4NM4Z'.

Question: What difficulties have you had so far with Pamela Vanderson?

Dan: Pam is an older lady. 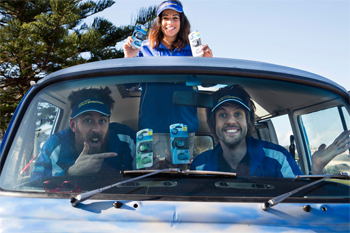 Dan: She's nearing the naughty 40's. And, sometimes when you get on in years it's a little harder to wake up in the morning. But you know what? She's still going!

Question: How can listeners get a lift to their next function in Pamela Vanderson?

Maz: All they have to do is registerer at www.danandmaz.com

Dan: Pamela Vanderson's whole timetable is on www.danandmaz.com and if the stars align you could be in the back of Pam!

Question: How have you kept the Kombi smelling fresh?

Dan:  Ambi Pur challenged us as they said they could keep Pamela Vanderson smelling fresh for 30 days.

Dan: And we said…

Dan: This is unbelievable. We have our guy Tommy driving around Australia and everyday he performs a smell test (which basically he sniffs the car) and Pamela Vanderson is smelling amazing.

Maz: It's not just people in and out of Pamela Vanderson; they have been bringing take-away food and she's been lived in, basically.

Dan: I'm pretty sure Tommy has slept in Pamela Vanderson just once.