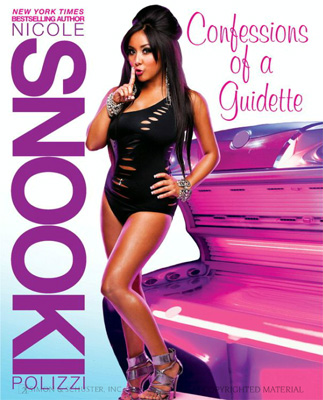 A loud, wild, cuddly and in-your-face party girl with sky-high hair and a spray tan, the pint-size Snooki has emerged as the breakout star of the wildly successful Jersey Shore. She's been parodied on Saturday Night Live, appeared on almost every major talk show (including Leno and Conan), was featured in the New York Times, and has more than 300,000 followers on Twitter. Snooki also has attracted a slew of celebrity fans, like Leo DiCaprio, Sean "Diddy" Combs, Ashton Kutcher, Demi Moore, Zach Braff and Tinsley Mortimer.

This attractively designed full colour book will feature tons of photos, tips, and fascinating details from American's favourite guidette and will be a must have for fans of Snooki and Jersey Shore.

* Snooki Style: The poof never dies; Waving, streaking and bangin' it - my other sick hairstyles; Why orange you tan; The guidette wardrobe - what to rock.

* Guidos, Gorillas & Juiceheads: What I look for in a gorilla; Different types of gorillas; How to break up with a guido so he isn't a stage-5 cling; Warning signs that the guy is a creeper; 5 sure signs a guy isn't a guido.