Dumb and Dumber To DVDs 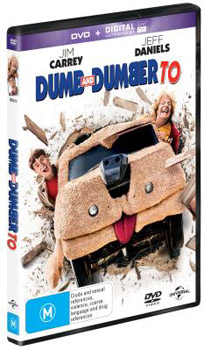 Thanks to Universal Sony here is your chance to win one of 10 x Dumb and Dumber To DVDs.

Twenty years since their first adventure, Jim Carrey (Dumb and Dumber, The Truman Show) and Jeff Daniels (Dumb and Dumber, The Newsroom) reprise their signature roles as Lloyd and Harry in the smash hit that took physical comedy and kicked it in the nuts, Dumb and Dumber To. Peter and Bobby Farrelly (Dumb & Dumber, There's Something About Mary) return to direct this highly anticipated sequel, taking the two loveable imbeciles on a road trip to find a child Harry never knew he had, and the responsibility neither should ever, ever be given.

In need of a new kidney and having learned that he has a long-lost daughter, dimwit Harry Dunne (Daniels) snaps his equally cretinous pal, Lloyd Christmas (Carrey), out of an apparent fugue state to accompany him on a journey to find her. The witless wonders criss-cross the country using whatever mode of transportation they can find, ultimately arriving at the one place on Earth where they least belong: a summit of the world's most brilliant minds.

Also starring Academy Award nominated actress Kathleen Turner (The Virgin Suicides, Romancing the Stone), comedian Rob Riggle (21 Jump Street, The Hangover) and audience favourite Bill Murray (Ghostbusters, Groundhog Day), don't miss out on the wacky adventures of this gormless duo as they find and steal their old "Shaggin' Wagon", are duped into pleasuring an old lady in exchange for her hearing aids and so many more.

Blu-ray Special Features:
Alternate Opening
Dumb and Dumber To for dummies
Remember what made you dumb in the first place
Hire a big, dumb cast (of smart people)
Jim Carrey is dumb
Jeff Daniels is dumb
Rob Riggle: From fandom to dumb-dumb
A Kathleen Turner-type (I'm not going to call her dumb)
Billy's back!
Remember: There are no small roles, just plenty of dumb ones
Comedy, schmomedy…you gotta gave dumb stunts and visual effects
Don't ride dirty…ride dumb
Cut dumb
Why it's smart to get dumb
Deleted/extended scenes
Gag reel
Feature commentary 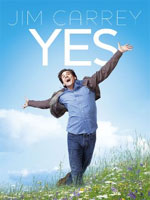 Jim Carrey is in his element, relaxed in a t-shirt and jeans promoting his latest film, Horton Hears a Who....