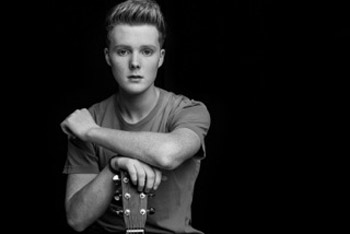 Colin began pursuing acting and music in 2011 at an AMTC showcase in Orlando, FL.  His stage presence and outgoing personality led to his being signed for acting by Abrams Artists Agency in LA and manager Cinda Snow of Snow Entertainment. That led to a year stay in Los Angeles, CA where he took extensive acting classes and went on many auditions, booking several small roles along the way, the highlight of which was a featured non-speaking role on ABC's Modern Family as Magritte's living " Man and the Apple".  While in LA, Colin wrote and recorded his first three original songs, 'Wings", 'I Bet" and 'Linger" with Producer, Anthony Mazza.

Colin returned to Texas in 2012 and began working with Grammy winning Producer Randy Miller to complete his first EP 'ECLECTIC". That was followed up in 2013 by a collaboration with Co-Writer/Producer Keith Follese in Nashville, on four new songs released as a second EP 'Best I Never Had'. Accompanying the second EP was a first official music video for title track 'Best I Never Had'. The video was produced and directed by Nayip Ramos in LA and has been well received with over 300,000 YouTube views and counting. Colin is currently recording new original songs for a 3rd EP with Producer Matt Noveskey (Bassist for Blue October) at Orb Studios in Austin TX. In July, 2014 Colin was one of 30 nationally screened performers to perform live on primetime television on the season premier of ABC's Rising Star.

Question: Can you tell us about Best I Never Had?

Colin Huntley: Best I Never Had is basically just a compilation of everything I was at 15 years old. Every song on the EP is representative of what I thought about most at the time, what meant the most to me, and who I was, really.

Colin Huntley: I do write my own songs. Usually, I draw my inspiration from major events happening to me, or observations I'll make throughout my everyday life. I try to be as observant as I can, and take in each and every moment to the fullest, so I can draw from my experiences when I'm trying to be creative. I just live as examined as I can.

Colin Huntley: I listen to a ridiculous variety of music. I'm an enormous fan of pop music! I know it gets a reputation for being overly simple or whatever, but I think it's brilliant that people can write music that is so infectious. It's really amazing how a pop song can essentially take over the world. I love rock, rap, hip hop, blues, alternative, indie, all of it. John Mayer and Ryan Tedder from OneRepublic are my all time music heroes though.

Colin Huntley: I have a new single I'll be going in to track very soon, called 'Eyes'. There's an acoustic version of it on my YouTube channel. I had put up some acoustic songs, and asked my fans which one they wanted me to put out next. The general consensus was definitely this song. I'm stoked for this one!

Colin Huntley: Haha, yeah! Last week, and the week before that, and the week before that. It's a difficult business to break into, and then just as difficult, if not more difficult, once you've gotten your foot in the door. It constantly gets discouraging. But every time I say I'm done, or I want to do something different, I'll wake up in the morning, and pick up my guitar. It's just instinct. I can't do anything else.

Colin Huntley: Performing is always going to be my passion. It's really why I make music. To see people connecting to what you're playing in that moment is, without fail, one of life's little precious gifts. It never gets old. Crafting in the studio is great, but it has nothing on connecting with people in a live setting.

Colin Huntley: I don't really have one. To be honest, I didn't even know there was a 'music industry' when I decided to I wanted to play music. I just kind of thought you started playing, and if you were good, you would tour and win Grammys. I didn't know it was an industry. I was just inspired to play by my musical heroes.

Colin Huntley: The biggest challenge has been failures. It's hard to fail, and it's especially hard when the risk is high. I've had a few experiences like that, with high stakes, where things didn't work out as planned. It will really take it out of you.

Colin Huntley: I'm still a junior in High School. I go to a performing arts school in Austin, Texas. However, I'll be graduating this year! So my typical day is school in the morning, afternoon music classes, after school work outs, then coming home and writing or working on whatever musical task I have going on at the time. I've got it down to a nice little schedule for the most part.

Colin Huntley: My favorite part is when somebody reaches out to me and says that whatever I'm doing is having an impact on them. Sometimes it's the music. I'll have somebody email me saying that my music has changed their life (which still blows my mind to even think about), and sometimes it is something as simple as I'll tweet something encouraging, and someone will go out their way to tell me it actually encouraged them. I really just want to put positivity out in the world, ultimately, and so moments like that are hard to beat.

Colin Huntley: As far as playing on a song, I would want to have John Mayer play a guitar solo on one of my songs! As far as writing, Ryan Tedder all the way. I just want to learn from him. He has like a magic formula for writing hit songs, I swear. And if not Ryan Tedder, I would love to write with Max Martin, but who wouldn't? Haha.

Colin Huntley: Like I touched on a little earlier, I really want my music to promote positivity. And if not the music, I want to use whatever platform music may give me as an opportunity to live my life in a positive way, to set a positive example for this world, cause I truly believe the world is lacking in those right now.

Full Name: Colin Brooks Huntley
Nickname(s): Ginger
Star Sign: Pisces
Favourite Food: Anything from Taco Bell
Favourite Film: Wayne's World
Favourite Actor: Robert Downey Jr.
Pet: Dogs, all the way!
Person You Would Most Like to Meet: John Mayer
Hobbies/Interests: Baseball, Hiking, doing things on the lake.
First Job: Dancing in a strawberry suit outside of my parent's smoothie store.
Are you a Pub, Bar or Club kind: None of the above. I'm a watch Netflix kind!
What Can You Never Leave Home Without: My phone, and some caffeine.
What is the first thing you think of when you wake up in the morning: I think of how I'd like to keep sleeping.