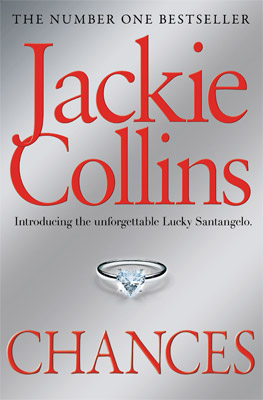 The book that made Jackie Collins one of Britain's favourite authors sweeps you from the sophisticated playgrounds of Europe to the glittering gambling palaces of Las Vegas. It plunges you into the reckless, dangerous world of the Santangelo crime family. It introduces you to Gino Santangelo, the street kid who makes it all the way to the top. And then it brings you Lucky - his sensual, stunningly beautiful, and passionate daughter; a woman who dares to win her father's empire for herself; a woman unafraid of taking … Chances.

There have been many imitators, but only Jackie Collins can tell you what really goes on in the fastest lane of all. From Beverly Hills bedrooms to a raunchy prowl along the streets of Hollywood; from glittering rock parties and concerts to stretch limos and the mansions of the power brokers -Jackie Collins chronicles the real truth from the inside looking out.

Jackie Collins has been called a "raunchy moralist" by the late director Louis Malle and "Hollywood's own Marcel Proust" by Vanity Fair magazine. With over 400 million copies of her books sold in more than 40 countries, and with some twenty-seven New York Times bestsellers to her credit, Jackie Collins is one of the world's top-selling novelists. She is known for giving her readers an unrivaled insiders knowledge of Hollywood and the glamorous lives and loves of the rich, famous, and infamous! "I write about real people in disguise," she says. "If anything, my characters are toned down - the truth is much more bizarre."

Jackie Collins started writing as a teenager, making up steamy stories her schoolmates paid to devour. Her first book, The World is Full of Married Men, became a sensational bestseller because of its open sexuality and the way it dealt honestly with the double standard. After that came The Stud, Sinners, The Love Killers, The World is Full of Divorced Women, The Bitch, Lovers And Gamblers, Chances, and then the international sensation, Hollywood Wives - a #1 New York Times bestseller, which was made into one of ABC's highest-rated miniseries starring Anthony Hopkins and Candice Bergen.

The Stud, The World is Full of Married Men, and The Bitch were also filmed - this time for the big screen. And Jackie wrote an original movie, Yesterday's Hero, starring Ian McShane and Suzanne Somers.

Readers couldn't wait to race through Lucky, her next book - a sequel to Chances - and the story of an incredibly beautiful, strong woman, another New York Times number one.Then came the bad boys of Hollywood in the steamy Hollywood.