Amethyst Amelia Kelly (born 7 June 1990), known professionally as Iggy Azalea (), is an Australian rapper. Azalea moved to the United States at the age of 16 to pursue a career in hip-hop music, and has since resided in the southern part of the country. Her stage name, from the masculine Egnatius, comes from the name of her dog and the street she lived on. She earned public recognition after releasing music videos for her songs "Pu$$y" and "Two Times" on YouTube. In 2012 Azalea signed a recording contract with Grand Hustle Records, which is owned by American rapper T.I., after gaining attention from her first full-length project, a mixtape titled Ignorant Art.

Azalea's debut studio album, The New Classic (2014), peaked among the top five of several charts worldwide and received generally mixed reviews. The New Classic was the first time an Australian rapper had ever charted on the Billboard 200. It topped the Billboard Top R&B/Hip-Hop Albums making Azalea the first non-American female rapper to reach the top of the chart. The album was preceded by her debut single "Work", and generated the US Billboard Hot 100 chart-topping single "Fancy", which spent more time on top of the charts than any other hip hop song that year. Azalea was featured on Ariana Grande's single "Problem", which peaked at No. 2 while "Fancy" was No. 1. Azalea joined The Beatles as the only acts to rank at numbers one and two simultaneously with their first two Hot 100 entries. She achieved three top-ten hits simultaneously on the Hot 100 with the aforementioned songs along with the album's fifth single, "Black Widow", later that year. 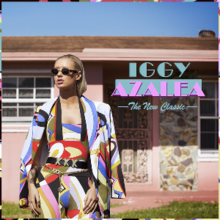 The New Classic is the debut studio album by Australian rapper Iggy Azalea. It was released on 21 April 2014, by Def Jam Recordings in United States, Virgin EMI in United Kingdom and affiliated record labels in other countries. Azalea came to prominence, after releasing her debut mixtape Ignorant Art and subsequently aligning herself with American rapper T.I. and his Hustle Gang imprint. Azalea first mentioned plans for the album in December 2011, but after numerous delays and label conflicts, Azalea eventually secured herself a record contract through Island Def Jam Music Group (now defunct). Though generally categorized as a hip hop album, The New Classic also incorporates elements of other genres, such as EDM, dance-pop and trap music in its production. 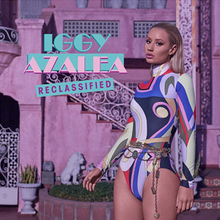 Reclassified is the reissue of Australian rapper Iggy Azalea's debut studio album The New Classic (2014). It was released on 21 November 2014, internationally by Virgin EMI Records and in the United States on 24 November 2014 by Def Jam Recordings. Released seven months after its parent album, Reclassified features five newly recorded songs. Azalea announced its re-release in the caption of an Instagram post of the issue's artwork. Reclassified became available for preorder on 24 October 2014 and its first single, "Beg for It", was made available for digital purchase the same day in the United States. 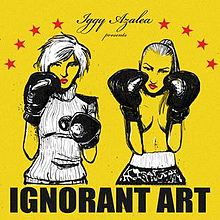 Ignorant Art is the debut mixtape by Australian rapper Iggy Azalea, who released it as a free digital download on 27 September 2011, and is widely recognized as launching her music career. It features production by Los Angeles-based production team, D.R.U.G.S., with their member Chordz 3D having executive produced the project, along with Azalea and Stix as co-executive producers, as noted on the mixtape's back cover credits. It also features guest appearances from YG, Problem, Joe Moses and Chevy Jones.