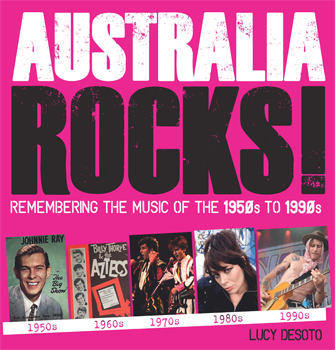 The glamour, the tribes, the action and fashions that created Australia's sound track.

From the demure dance halls of the 1950s to the smoke-filled pubs of the 1970s and the packed concerts of the 1990s and beyond, Australia Rocks will have music lovers of all ages ready to rock and maybe get out vinyl collections to let the good times.

Rockers, popsters and all the music tribes will get a lot from this fabulously researched history. The author shines light on the independent bands, from those with cult followings to those with legions of devoted loyal fans.

The detail is impressive but the book also looks at the huge political forces and events that influenced music – such as the Vietnam war, the swinging sixties, the protest movement.

Australia Rocks brings the bands and the times to life through unique photographs combined with evocative text.

Get to know the rich history of performers and bands such as the earliest big name, 'The Wild One" aka J.O'K, Johnny O'Keefe in the late 1950s, into the 60s and the Easybeats, to the 70s with Cold Chisel, and of course AC/DC who have blasted through several decades. But it was the 1980s and 1990s when Australian rock truly made its mark internationally with bands such as Men at Work, Midnight Oil and INXS.

Rock musician, Lucy Desoto has lived the story and she charts the big names that burst Australian rock on to the world as well those who rocked the local scene.

Lucy Desoto has sung and played keyboards with some of Australia's leading musicians. She has an honours degree in Media Arts and a Doctorate of Creative Arts. Now based in Alice Springs, Lucy continues to rock 'n' roll. This is her first book.

Lucy Desoto: Gareth St. John Thomas, founder of the Exisle Publishing Company, contacted me with the idea for a Father's Day gift – a coffee table book titled 'Australia Rocks" featuring photographs of Australian bands and rock stars of the 20th century. He asked if I'd be interested in writing the book and compiling the pictures, so I agreed. That's where it all started.


Question: How long have you been collating photography for Australia Rocks?

Lucy Desoto: The entire book project took about 2 years, but some of the photographs form part of private collections that represent the life's work of musicians or entrepreneurs or fans.

Lucy Desoto: The book features some of the best loved and most famous icons of Australian rock music, as well as some of the most subversive and influential underground musos. The book is a history of popular music in Australia since the 1950s until 2000, so to cover that 50 years, I offer examples of bands from every era and every style. There's no particular focus on any single band or artist or style – just a broad overview of the way rock music started out as a dance craze and then spread and multiplied to become the global phenomenon that it is today.


Question: Can you tell us about your music?

Lucy Desoto: American blues music opened up a new realm of consciousness, an unprecedented level of soulful experience and heartfelt expression that changed my life when I first heard it when I was about 10 years old. My whole life has been moved by the rhythm of that musical influence ever since.


Question: What inspired your love of music?

Lucy Desoto: I'm very lucky. My mum and dad loved music. They encouraged me to listen and to learn to play (I had piano lessons throughout my childhood and teen years) and I guess my love of music reflects their influence, the influence of my extended family, friends and the general social trends that were the heritage of my generation, for which I'm very thankful.