Imbued with hauntingly clear vocals and dark pop production, Athena Joy's new single is an enchantingly original contribution to the Australian pop scene. "Just Like You" is inspired by a need to feel strength in the defeat and pain life throws at you, every time a bad period is over something else happens to drag you under, the track is about overcoming this.

Hailing from the Gold Coast, Athena Joy is the solo project of indie-pop singer-songwriter Hannah Luke. "Just Like You" is her first exciting release since she began to build hype in 2018, with her debut EP "Blue" and two singles "Repeat" and "The Weekend" receiving praise from triple j Unearthed presenters and indie music media from around the country. With vocal strength compared to Florence and The Machine and Sia, her music has been described as 'hauntingly beautiful' by AAA Backstage and has already earned her a Queensland Music Awardsnomination with her second single "Repeat".

Athena Joy: Hard to say as I feel like it's still evolving, maybe a touch of darkness, a sprinkle of sugar and a slither of my soul on a silver platter.

Athena Joy: I was feeling really beaten down by life honestly… you know those moments in life where you just need a win? That feeling! That then inspired these kind of dry jokes with myself of like "of course that's just like you" "that's just like the universe to do this" and the song kind of poured out of that feeling. I wanted to feel stronger in order to get through the things life was throwing at me so I guess I wrote the song trying to find strength in the madness.

Athena Joy: Emotions/feelings seem to be the biggest motivator for me. Probably cause I've always found music to be therapeutic.

Athena Joy: I like both for very different reasons and I feel like I kind of go through phases where I prefer one over the other. At the moment it's probably more recording - I just love the exploration that comes with recording the studio is like a playground. Getting to set the scene for a song that means a lot to you is also a really beautiful thing. It's kind of giving people a tiny invitation to experience a feeling of your own.

Athena Joy: I have an unreleased song called Cold and for a while it's been my favourite to play… I just have so much personal attachment to that song. Even though it's been almost five years since I wrote it it's like every time we play it still feels relevant and there's been a few times where I've just cried on stage purely because I just forget where I am.

That being said though we played Just Like You live for the first time a few months ago and the audience seemed to have so much fun with it may soon change my mind. 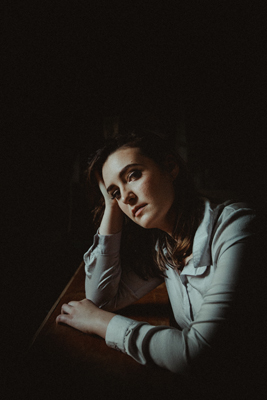 Athena Joy: I think it would be really surreal to have anyone you know has inspired your own musical journey there in the crowd. Today the first person that comes to mind is Lady Gaga cause I was just listening to Edge Of Glory (still an icon).

I think I would just cry of happiness if I saw her though I don't know if I could finish (laughs). As a teenager I always felt like a bit of a misfit and I think she became such a symbol for goodness through those awkward teen years. I remember when I was really nervous for a gig once I literally blasted her album in my room for hours. She's one of those artists who make you feel like you can do anything, I love it. She's an artist who I look at my life and wonder who I would be without her existing.

Athena Joy: I think it was a decision I made as a teenager… It was around the time I started writing about my life that I really fell in love with writing and feeling that sort of catharsis and freedom associated with it - I just knew it was something I wanted to do forever.

Athena Joy: I would love to collaborate with someone like Lorde, her lyrics are incredible and interesting I think I would even just love to be a fly on the wall watching her write.

Athena Joy: Honestly the last couple of years have been really challenging. My mental health kind of got to a place where it was affecting my ability to do anything, even music. That has probably been the hardest thing to manage because it doesn't just go away. Especially as an indie artist it's not like you have a whole lot of money or a team of people there helping you to get better or helping with your projects, at the end of the day it's all on you. I think that's the biggest challenge a lot of musicians face unfortunately.

Athena Joy: Well I still have a day job so honestly most of my days are juggling music with that.

My ideal morning would be getting up early to go to the beach and ease into the day but honestly normally it's usually getting up early and getting distracted by emails or music work I'm behind on like making setlists/organising rehearsals etc. After work I usually go to the gym or record or song-write or play gigs. It depends on the day!

Athena Joy: Some of my closest friendships and greatest memories have come with being a musician. I think because I'm from a relatively small town and I didn't get the chance to meet a lot of people like me there, so getting out there and getting to meet people who are more like me and understand my brain has so far been my favourite part.