Criminal Records is thrilled to announce the latest addition to their roster, -Argonaut'. Discovered playing London's toilet circuit, Argonaut have signed up with Criminal for three albums, the first of which is due out this year. Recorded at Cartel Studios in West London, new recordings have taken stock of the bands previous seven albums. Their debut video and single release -Touch Electric' is due out in the spring, and showcases their grunge vs. pop rock influences.

Question: How did it feel to hear your song played all over the airwaves?

Lorna: It's about time! It's where they should be – out there, not sitting on a shelf. It's a shock hearing them though – very exciting!


Question: Can you talk about the filming of the debut video for Touch Electric?

Lorna: We began by filming a live show and cutting the shots really fast to give a sharp, electric feel – to fit the music. It felt really glamorous filming my parts! It was fun to see people looking, wondering what was going on. We used some interesting techniques – I had to sing to a really sped up track and in contrast really slow it down . I also had a shoulder mounted camera for the corridor scenes. We're really pleased with it – it looks very cool.

Lorna: We write all our own songs. I write some lyrics but I'm more of a muse – the inspiration! Feelings, cosmic thoughts, big ideas, documenting our joys and sorrows – all these things feed into our songs. 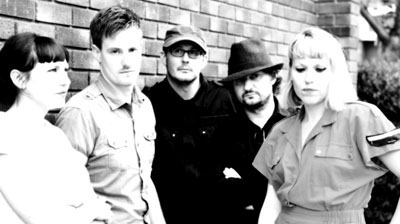 Lorna: At the moment I've rediscovered Young Marble Giants – so influential and perfectly recorded. I listen to a huge range but always back to the classics – Nirvana, Pixies, Sonic Youth…

Lorna: Touch Electric single just about to be released then the album pretty soon after. Then a tour to promote. We're all ready to go and looking forward to getting our music heard all over the world.

Lorna: Not in terms of giving up making music – it's something I'll always need to do – but we did get to a stage where we were resigned to recording and playing for ourselves – not worrying what anyone else thought or even if they were listening! Which ironically is when everyone started getting into the band and asking us to record and play more shows.

Lorna: I love live, the passion and excitement, such a release. I'm really aware of when I haven't performed for a while – it builds up inside and I just need to rock out! Recording is cool as well though, it's great to have the finished product to listen to and play to others.

Lorna: Seeing bands and thinking -I should be doing this myself, I could do this better'. I've always been a performer, not content to just spectate. I love music and want to be a part of it, not just sitting back and listening. It's an active thing, not at all passive

Lorna: Getting heard by a wider audience. I've always had the self belief but it's nice to get the recognition, to know that people get what we're doing, that they enjoy it as much as we do.

Lorna: Wake up smiling, yoga, hanging out with friends and playing rock music!

Lorna: Expressing ourselves through our music – enjoying being with the band, hanging out and making great music together. Documenting our feelings and thoughts in our songs. Being a contender, knowing that we are doing it and putting our music out there.

Lorna: Trent Reznor (Nine Inch Nails) – he has always been one of my heroes and he'd be a great producer or do an awesome remix. Or the Muppets!


Question: Can you tell us what things are required for a happy healthy & enjoyable life?

Lorna: Smiling – you have to smile. Yoga – it really centres me. Talking to friends. And playing rock and roll!

Lorna: We wanted something heroic, mythological or sci fi sounding. I remember we started talking about Harryhausen movies and Jason and the Argonauts – we heard the word Argonaut and thought -yeah, that's it!'