Thomas Grady (Zach McGowan), former paparazzi, inadvertently captures a scandalous, revealing shot of one of the world's most prominent and beloved figures - the First Lady (Joyce DeWitt). What ensues is a terrific conflict of morals, love and money, while examining the fine line between an individual's right to privacy and the public's right to know. Snapshot draws a parallel between the damage that can be inflicted by shooting someone with a camera instead of a gun. Possession of this photo forces Thomas to deal with ethical struggles and to confront the love of his life (Angela Gots), his brother (David Chokachi) and his father (Robert Loggia) as this photo puts the true nature of their relationships to a test, while an underlying life threatening danger exists, with an ending you would not expect. How far would you go to protect your privacy? 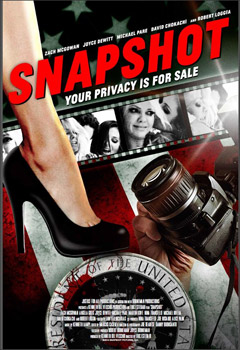 
Question: What drew you to the character of Arianna Simmons?

Angela Gots: She is a truth speaker and seeker.


Question: How can you relate to the character of Arianna Simmons?

Angela Gots: I think what I connected to most about Arianna was her lightness in finding humor in most situations.


Question: What was the most difficult part about filming Snapshot?

Angela Gots: Having to say goodbye to the cast and crew on the east coast, great people. Especially the producers, Bob Borneman and Ken Del Vecchio.


Question: What was it like working with Eric Estebari?

Angela Gots: Eric is certainly an actor's director. He encouraged all actors to really give their own input on how they felt about a scene. Eric would let the actor roll with their ideas and then he would fill any blank spaces. If he felt it was going off in the wrong way, he would gently bring the actor back to find their intention in the scene. It was great to be a part of that kind of inspiring working climate. And he is a really spectacular problem solver as well.


Question: Do you prefer acting for television or film?

Angela Gots: I like working in both mediums. What drives me is playing characters that challenge me in a knew point of view in some way, expand my idea of the human condition. That isn't always the case, but that's what I hope for…


Question: How do you feel when you watch yourself of the big screen?

Angela Gots: It's fun and torturous all at the same time.


Question: What is your top pick-me-up trick?

Angela Gots: Coffee! And less socialising on set, I find that that ends up exhausting me more...


Question: Where would we find you on a Sunday?

Angela Gots: In truth, I hope to not be found on a Sunday, nothing personal.


Question: What is the biggest challenge you have faced along the way to your acting success?

Angela Gots: Learning how to not get attached to my performances in auditions as well as on the job. It's easy to take things heart, which can start to get damaging for any human being, but accepting that I have no idea what's happening behind closed doors is relieving. All I can do is my absolute best, and enjoy myself, the rest is out of my control, period.

Angela Gots: It really is always different, there can be days I have a 6:30am call time and days when there is an 8pm call time both involve coffee and figuring out a good strategic sleep pattern, on days that I am not working, I am either preparing for an audition, or staying creative by working on cultivating and writing my own project and or working on my jewelry line which is another passion of mine


Question: What has been your favourite part of becoming an actor?

Angela Gots: The unpredictability. Constantly on your toes, in a way perhaps keeps us all a bit young at heart, can never fully rest into anything, its sounds unsettling, but I think some people were built to thrive in that kind of lifestyle…


Question: If you could work with another actor, who would it be?

Angela Gots: Working on creating and continuing to be a part of, thought provoking content.