Synopsis: From the directors of Meru comes Free Solo, a stunning, intimate and unflinching portrait of the free soloist climber Alex Honnold, as he prepares to achieve his lifelong dream of climbing the face of the world's most famous rock - the 3,200ft El Capitan in Yosemite National Park... without a rope. Celebrated as one of the greatest athletic feats of any kind, Honnold's climb set the ultimate standard: perfection or death. Succeeding in this challenge places his story in the annals of human achievement.

Free Solo is an edge-of-your seat thriller and an inspiring portrait of an athlete who challenges both his body and his beliefs on a quest to triumph over the impossible, revealing the personal toll of excellence. As the climber begins his training, the armour of invincibility he's built up over decades unexpectedly breaks apart when Honnold begins to fall in love, threatening his focus and giving way to injury and setbacks. The film beautifully captures deeply human moments with Honnold as well as the death-defying climb with exquisite artistry and masterful, vertigo-inducing camerawork. The result is a triumph of the human spirit. 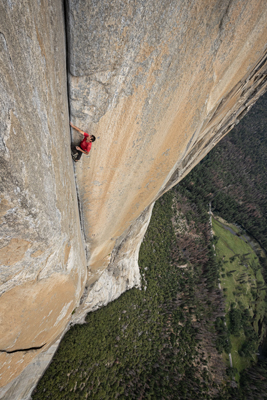 Question: What was it like, the first time you climbed El Capitan?

Alex Honnold: Completely outrageous. My partner and I had the big goal for the season to climb El Capitan in a day"by any means, not free climbing, just doing anything we could to get to the top. We built up for it the whole season. It was a big adventure, a big challenge. We climbed the easiest route in 23 hours. Doing it represented a whole other world of climbing.


Question: You've said that free soloing El Capitan was the ultimate climb you'd been working toward, the pinnacle achievement. What were your thoughts when you walked up to El Capitan the morning you were going to free solo it?

Alex Honnold: Not really anything. The whole point of all the preparation was to ensure that on the day of I wasn't thinking anything through. I'd been doing a ton of thinking beforehand. The morning of, I was just on auto-pilot, executing. I did park in a slightly different parking place because I didn't want to see anybody in the meadow. It meant that I was walking a trail that goes past the length of El Cap. I was walking along the entire east wall and did think, "This sure is a big piece of rock." I knew that I was ready and that it was all happening.


Question: Did you feel any added pressure because there was a movie being made of it?

Alex Honnold: Not really. In a lot of ways, I actually wanted the movie project. It put slightly more time pressure on it so that I would be motivated enough to get out there and start working. Climbing El Cap is something I'd been dreaming about for years but had not actually acted on because it seemed a little too daunting or a little too big. So, I wanted an extra push to get me started and putting in the work. My big fear was that I would go my whole life without actually trying. There had been six or seven years that I'd said, "This is the year I'm going to solo El Cap," and then gone to Yosemite and said, "Nope, this isn't the year, and I'm not even going to try." I needed a reason to start putting the effort in and see if it was possible. 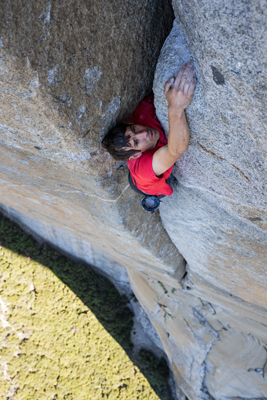 Question: Where's your orientation when you're climbing? Do you look down a lot? How aware are you of where you are in relation to the ground?

Alex Honnold: I'm very aware. A big part of going up on big walls like that is to have the exposure, to have the experience of being way up off the ground. That's definitely a big part of the appeal to me. In terms of "Do I look down?" Of course, I look down. But in the actual movement of climbing, you're constantly looking down at your feet and your hands and that doesn't mean that I'm thinking about the exposure. Primarily, I'm just climbing.


Question: Where does the confidence and self-belief come from?

Alex Honnold: I see it all rooted in rationalism, in a basic evaluation of objective reality: Can I do this? And if I can, then I just do it. If I've done something on a rope over and over and over, then obviously I can physically do it, so there's no real reason why I shouldn't be able to do it without the rope.


Question: What are your thoughts about fate, given what you do? Many people would look at what you do and have a sense that you're right on the edge between life and death.

Alex Honnold: I would hope that they're wrong about that! But who knows? I've never been religious or spiritual in any way. I'm not a big subscriber to fate. I see life as probabilities and chance and reality. Fate doesn't play into my thinking at all. But I definitely do think about mortality and my time being short. I'm very aware that I have a limited time here and I should make the most of it and do what I can. I think that the desire to do my best in climbing does stem in part from knowing that I'll only be here for a certain amount of time. 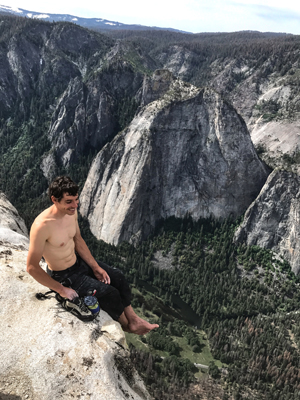 Question: Do you have a sense of what the next big challenge will be?

Alex Honnold: I have no idea. In terms of an El Cap type challenge, I think it might be another year or two before I really get inspired by something mega. We'll see.


Question: I think it's fair to say that you do things that many people would not do because they would be stopped by fear. What is the difference there? Is it that you've learned to manage fear, or something innate?

Alex Honnold: Part of that is that I've spent so much time being afraid. I have a lot of experience with fear, probably more than the average person. And I think that allows me to help differentiate when I'm truly in danger and when I should act on it " whether or not this fear that I'm feeling is important or not.

Alex Honnold: It's such an interesting and complicated subject, fear and how the brain works. There was a story in Nautilus magazine about a study of my amygdala. One of the things I took away from that article is that my brain seems to light up a bit less than normal to begin with, so I was probably already on the fairly dull end of the spectrum in terms of a fear response. That combined with years and years of exposure to fear, now I think it's really dulled.


Question: Why are you out climbing?

Alex Honnold: Because it's awesome.