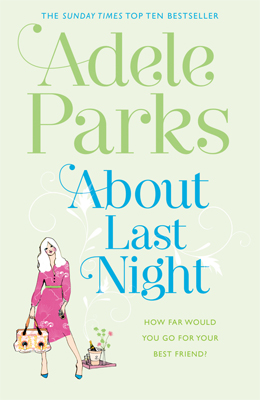 'I need you to say that I was with you...' With these simple words, two women's enduring friendship is put to the ultimate test.

For one, the appeal is borne of desperation to conceal a secret and a desire to protect her family. For the other, the request turns her world upside down. She is usually the one asking for help in a crisis, but nothing she's ever faced has come close to this. Now that the tables have turned, each woman must ask herself- how far will I go for my best friend?

Adele Parks worked in advertising until she published her first novel, Playing Away, in 2000; which was the debut bestseller of that year. Adele has gone on to publish ten novels in ten years, and all of her novels have been top ten bestsellers. Her work has been translated in to twenty different languages. Since 2006 Adele has been an official spokeswoman for World Book Day. Adele has spent her adult life in Italy, Botswana and London until 2005 when she moved to Guildford, where she now lives with her husband and son. She's a trustee of Guildford Book Festival.