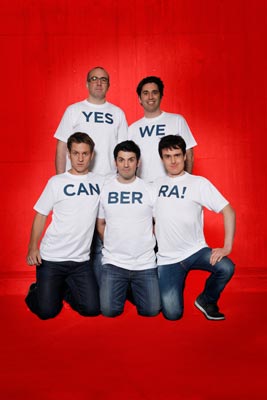 Yes We Canberra! is an all-new format which showcases The Chaser in their current occupation - as warm-up guys for the network's current affairs flagship Lateline.

"Most people don't know that Lateline is filmed in front of a live studio audience," said executive producer Julian Morrow.
"That's the problem - they're terribly quiet. So the ABC hired us to rev them up a bit. Hopefully, we can help Tony (Jones) and Leigh (Sales) receive the wild applause, hollers and whoops they deserve."

The fictional setting of the Lateline warm-up is a departure from the Chaser's previous election special, The Chaser Decides, which was set in the national tallyroom. Yes We Canberra! will also differ from The Chaser Decides by not winning a Logie.

"Just because they're doing the warm-up, doesn't mean they can speak for the show," said Lateline presenter Leigh Sales. "But I think adding The Chaser to the Lateline team will give us a gravitas we've been lacking to date."
"I'll take that as a comment," added Tony Jones.
The team admits Yes We Canberra! was not their preferred title for the show.

"We wanted the name of the show to be Ratf#*ked 2010," Chris Taylor explained, "but apparently that's what the ABC's main coverage is going to be called".
"Our next preference for a title was Andrew, Chris, Chas, Craig & Jules' Election Fever but I think there was a legal problem with that too."
"To be honest we're just relieved to have some paid work," Craig Reucassel said about the Lateline warm-up gig. "Mark Scott is a very compassionate person.
He gave Poh a job at the ABC when she lost MasterChef, and now he's done the same thing for us."

Yes We Canberra!
ABC1
Wednesday nights at 9:45pm for four weeks before the election, with an election wrap-up the Wednesday after the poll.