Women today are expected to skillfully juggle a variety of priorities, and some try to make it work by skipping sleep. That's a mistake. Sleep is important for everyone's well-being, and women are no exception. In fact, there is plenty of evidence that getting enough quality sleep is especially important for females. Why is sleep so vital for women? In a world that never seems to sleep, what can you do to improve the odds that you can secure the quality shut-eye that you need?

Why Sleep Matters
Few people think of sleep as an activity. Instead, it's often considered a luxury to be indulged in. How many times have you heard sleeping in described as a treat? Despite that perception, sleep is essential for your physical, mental and emotional health. Although people may think of it as downtime, the body is actually busy with critical tasks like memory consolidation and healing during sleep, so shortchanging it of this rest period is not wise.

What are the ill effects of sleep deprivation? Too little sleep has a negative impact on cognition and memory, making learning more difficult and interfering with decision-making skills. It also increases irritability and moodiness, which can affect a person's personal and professional interactions. Physically, it is thought that lack of sleep alters hormone levels and spurs metabolic changes that make weight gain more likely. Worse, it is linked with decreased immune function, leaving you more vulnerable to a host of serious health conditions like cardiovascular issues, hypertension, cancer and diabetes.

Why Sleep Matters More for Females
Why is sufficient sleep particularly important if you're a woman? Scientific studies demonstrate that the differences in sleep between men and women appear at a young age. Thanks in part to the hormonal fluctuations that accompany their menstrual cycles and situations like pregnancy or menopause, women live with a higher risk for insomnia and are more likely to report problems with poor sleep. Unfortunately, they are also more likely to go undiagnosed. Historically, most sleep studies were conducted with male subjects, so the diagnostic criteria for many sleep disorders are geared toward the symptoms seen in men. Women generally have different symptoms. For example, sleep apnea is often identified in males when they report snoring or gasping during the night. In contrast, women with sleep apnea are more prone to daytime sleepiness.

Research also indicates that females are hit harder by the negative impacts of sleep disorders than their male counterparts. While both men and women tend to present with symptoms of sleep troubles at the same age, women tend to face more severe symptoms of depression, have more difficulty sleeping during the night, and struggle more with excessive sleepiness during the day. Their focus and cognitive abilities also suffer more severely when they are tired. 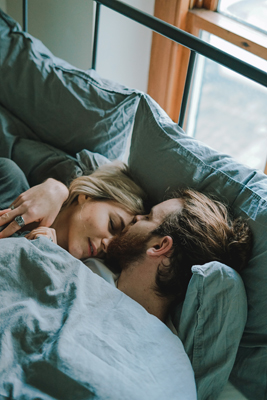 Tips for Improving Slumber Sessions
Recognising the inherent value of sleep is a good first step, but it's only the beginning of the journey if you are eager to improve your slumber sessions. Fortunately, there are many things a woman can do to increase her odds of enjoying quality sleep:

● Respect your circadian rhythms. Support your body's natural wake-sleep cycle by following a regular routine for rising in the morning and retiring at night. Try to stay active during the day and seek out exposure to light. In the evening, avoid things that make sleep difficult like bright lights, caffeine or spicy foods.
● Make time for exercise. Studies show that getting as little as 30 minutes of aerobic exercise a day can result in better sleep that night. However, the time of day may be a factor. Some people find it best to avoid physical activity in the three hours before bedtime.
● Create a comfortable sleeping environment. Physical discomfort can make falling asleep difficult, so taking steps to make your bed a comfortable space is vital. For example, Melburnians routinely deal with big swings in temperature, so choosing a mattress that can cope with Melbourne's fickle weather so that they don't find themselves breaking out in a sweat can go a long way toward securing those who live in this Australian city a better night's sleep.
● Limit drinking before bed. Although hydration is healthy, drinking too much fluid before bed can set the stage for nocturia, which is the increased need to for bathroom breaks during the night. This is especially true when your drink of choice contains alcohol or caffeine since these substances irritate the bladder and increase your need to urinate.
● Seek help if sleep problems persist. Sometimes, self-help measures are not enough. If daytime sleepiness or falling or staying asleep is a frequent problem, talk to your doctor or make an appointment with a sleep specialist.

Living a healthy lifestyle involves eating right and exercising. It also includes getting enough quality sleep. While women face additional challenges, being mindful of the importance of sleep and taking steps to get the rest that you need can help you stay happy and healthy.