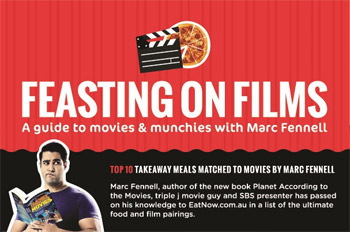 Ever considered whether your food is enhancing your at-home movie experience?  It might be time to give it some more thought according to Australia's most popular movie buff, because how good is a movie night in when you're so immersed in another world that you don't check your DMs?

Marc Fennell, author of the new book Planet According to the Movies, triple j movie guy and SBS presenter, has passed on his knowledge to EatNow.com.au, an online takeaway ordering platform popular with young Australians, in a list of the ultimate food and film pairings.

Forget Netflix and chill, it's time for takeout and chill.  This will change your life, period.


'Like toppings on a Pizza, you gotta lot of choices for good pizza movies.  It's hard to beat Saturday Night Fever with that opening shot of John Travolta strutting down the street with two – count -em, two – slices of pizza stacked on top of each other.  Truly, pizza is the food of strutting."

'There's just something incredibly charming about the way Po the Panda (Jack Black) seems to inhale soup. You can taste the salt and feel the warm splatter on your face. Is he necessarily drinking Vietnamese Pho? Given the film is set in mainland China, probably not. But Pho is the best of all of the soups, so just go with me on this combo."

'Burritos might be delicious but Anchorman shows us they are also powerful weapons of destruction when thrown from passing cars.  Thrown burritos are hazardous to bikers and adorable dogs named Baxter. Eat the burrito.  Chow down on it but whatever you do, don't throw it."

'Pussy Soup has one of the best and most misleading titles in history.  It's about a Japanese puppet cat that looks like the baby of Pickachu and Hello Kitty.  Awesome, right?!  He becomes a famed Ramen chef because, of course he does.  This is the most amazingly weird movie you'll ever see."

'This movie is a great celebration of Indian culture, so why deprive yourself from immersing yourself in the full experience?  That's where Chicken Tikka Masala comes in."

Fish and Chips with A Fish Called Wanda

'This one's worth watching purely for the scene where Kevin Kline eats goldfish out of a tank.  Because nothing is going to make your fish and chips look tastier than comparing it to that."

'Sleeper is Woody Allen's foray into science fiction and sees our hero awake 200 years in the future where food is grown in huge proportions, including a 2.5-metre tall chicken on a leash.  -That's a big chicken,' Allen says.  Yeah, think of how much dipping sauce you'd need."

'Why not enjoy Malaysia's number one dish while watching Sean Connery and Catherine Zeta Jones hang off Malaysia's tallest building in this loopy heist movie?"

'This is easily the greatest scene involving a burger in cinematic history. There's nothing like having Samuel L. Jackson threatening your life to make you really value that bun."

Sushi with Jiro Dreams of Sushi

'Stick with me on this one, it's a doco about ancient sushi master Jiro Ono and his renowned Tokyo restaurant.  Jiro will have you salivating over your sushi and want to hug the person who made it for you."