This Little Love of Mine THIS LITTLE LOVE OF MINE follows Laura Price, a successful San Francisco lawyer on the cusp of promotion - a far cry from her childhood growing up on a tropical island with best friends Chip and Gem. When the firm's biggest client - Chip's grandfather - asks Laura to travel to the island and deliver a contract to make Chip his heir, she leaves behind her practice and fiancé Owen, to convince her childhood friend to sign a contract that will make him a billionaire. As Chip and Laura grow closer, she questions whether she's engaged to the right man or if she belongs back on the island with her childhood sweetheart.

This Little Love of Mine

Laura Price is a successful San Francisco lawyer and the talk of the firm after landing a major business deal. With the goal of making partner clearly in her sights, and an equally successful fiancé, Owen, by her side, Laura's life is a far cry from the childhood she spent growing up on the beautiful tropical island of Sapphire Cove with best friends Gem and Chip.

When Graham Finley – a celebrated businessman and Chip's grandfather - arrives at the firm to ask for her help, Laura sees the chance to snap up her dream job. All she must do is get Chip to sign a contract making him the new CEO of Graham's corporation. With the deadline of Graham's 85th birthday fast approaching, Laura leaves her busy city life, and Owen, to return to Sapphire Cove and convince her childhood friend to sign.

During her journey, Laura's thoughts turn to Chip, and the necklace they buried before she departed as a token of their connection.

On arriving to the island, the chemistry between Chip and Laura is immediate. While, Chip doesn't initially recognise Laura, Gem greets her return with excitement… until she discovers the motive behind it. Laura isn't the first lawyer to try and convince Chip to sign the contract.

It's not until Laura beats Chip at a game of 'coconut toss' that he realises who she really is. Despite the years spent apart, it's just like old times. The only difference is that while Chip prefers to relax, Laura would rather work.

Determined not to take over his grandfather's corporation, Chip refuses to sign or even read the contract. He wants to remain on the island so that he can focus on his charity work. With neither willing to give in, a deal is struck between the two: for every fun island activity Laura takes part in, Chip will read a page of the contract.

The following day, Chip arrives at Laura's room, ready to take her snorkelling on the first of their adventures. Laura is reluctant to put down her phone, though she knows she has little choice. It's not long before she finds herself reconnecting with the life she left behind the day she moved from Sapphire Cove.

As each day passes and a new adventure unfolds, Laura's connection to Chip grows stronger, and she sees a new side to him.

When a storm hits the island, Chip and Laura travel to Gem's parent's house to help clean up the damage. It's her dream home – and, as it turns out, a home Chip built as part of his charity work. The sight of it inspires a resurgence in Laura for her own love for charity work, as well as her love for Chip.
On their return to the resort, Laura and Chip are surprised by Owen's arrival. Over dinner, he announces he wants to marry Laura right away, on the island. When Owen leaves to take a work call, Chip accuses Laura of being a corporate suit just like Owen. Upset and confused, Laura leaves.

Finding Owen still on the phone by the pool, Laura comes to realise he represents the part of her she was glad to leave behind in San Francisco and breaks off the engagement.

With Graham's 85th birthday party on the horizon, Laura and Chip struggle alone to determine the best path forward. Laura doesn't want to pressure Chip, yet neither does she want to give up her promotion and the opportunities it will provide.

For Chip, signing the contract will give Laura the promotion she's worked so hard for, though it will mean losing both Laura and his charity.
As the party begins, Laura prepares to return to San Francisco and announce her failure to her boss, though not before saying goodbye to Chip and Graham.

A call from the firm soon puts that to an end, however. Chip has signed. Her promotion is agreed upon and she's been booked on the last flight home. She says a last goodbye to Gem and departs in a taxi.

Yearning for the connection he's now lost for a second time, Chip heads into the forest to dig up the necklace they buried as children. Lo and behold, the necklace box is empty.

Crestfallen, Chip returns to the party, only for Laura to appear soon after. Following her short time in Sapphire Cove, the life Laura worked tirelessly for in San Francisco no longer appeals. Chip tells her that the necklace they buried is gone, only for Laura to reveal it hanging around her neck. She took it with her the day she departed so that he would always be close to her heart.

The two express their love for one another, and decide they'll unite their worlds to make the best of their new situation. Laura will establish a law practice on the island, Chip will take his place as CEO, and they'll combine their efforts to provide charity for those who will benefit from it. They kiss as fireworks light up the night sky above them. 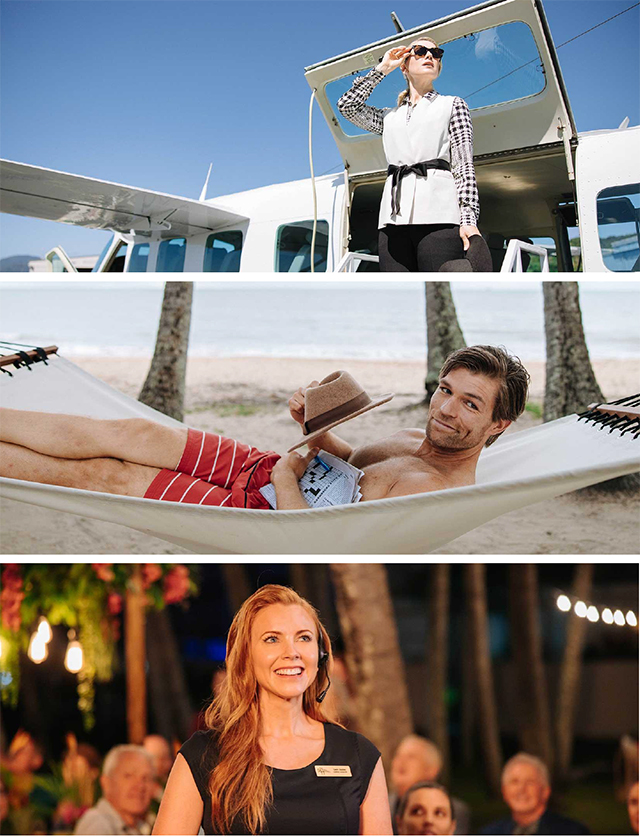