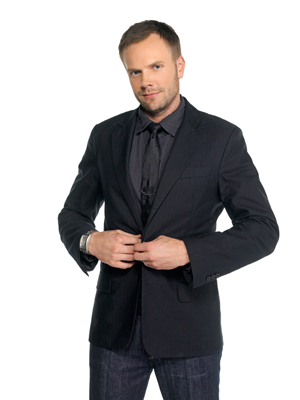 E!'s hit series "The Soup" celebrates its milestone 300th episode Sunday, December 5 at 7pm AEDST. Over the years host Joel McHale, along with an army of surprise celebrity guests, has brought couch potatoes the best clips from the worst shows and pop culture moments and no one, not even the humble heiresses of "The Simple Life," were safe. From reality television gems such as "Tool Academy," and "Bad Girls Club" to talk show bloopers on "Live with Regis and Kelly," and "Larry King Live!" to angsty teen melodrama on "Gossip Girl," and "90210" to just purely bizarre behavior from Tyra Banks and Lindsay Lohan, E!'s "The Soup" has become the Friday night destination to get your weekly dish of the craziest moments that pop culture has to offer. 300 "Soups" proudly served and many more steamy helpings on the way.

In honor of this moment in TV history, "The Soup" favorite, Seth Green, will make a special guest appearance. In addition, former Soup "victims," including the morning show hosts of Good Day New York and Good Day LA, Regis Philbin and Kelly Ripa, Wendy Williams, Kathy Lee Gifford and Hoda Kotb, pay their respects to the series with personalized shout-outs and Sanjaya returns with his own message for Joel. "The Soup" will also count down its top 3 moments as voted by the fans of the show on E! Online poll.

For the past seven years, loyal fans have enjoyed the sharp wit and keen eye for the best of the worst in reality television provided by host Joel McHale. Armed with a team of interns and the hairy chested, bikini wearing Mankini, "The Soup" scours the week of television, spending hours pondering over the week's most outrageous and topical moments in pop culture. From train wreck "American Idol" contestants and New Jersey's finest hooking up in a dirty hot tub to Wendy Williams' weave-of-the-week and long, awkward stares of "The Hills," "The Soup" has covered every laughable TV moment. With his trademark dry wit and take-no-prisoners humor, McHale is television's answer for laugh-out-loud observations, pee-in-your-pants reality show clips and dead-on commentary celebrating the week's most memorable moments in entertainment.

But, as everyone knows it takes a village to raise a child... or make a hit television show... and in this case the village is made of some of Hollywood's most popular stars who have risked their own reputations to be guests on "The Soup" and assist Joel in presenting the soupiest moments of the week. From billboard chart toppers to television award winners, "The Soup" has had some of the most entertaining talents in the business participate in the oh-so-meaty goodness including: Eminem, Katherine McPhee, "Lost's" Michael Emerson, Academy Award Nominee Gabourey Sidibe, "Modern Family's" Sarah Hyland, Martha Stewart, "The Bachelor" host Chris Harrison, Oscar Nunez of "The Office," "Dancing with the Star's" Maksim Chmerkovskiy, "Breaking Bad's" Aaron Paul, "The Hills'" Stephanie Pratt, "Dexter's" Julie Benz, Gold Medalist Misty May-Treanor, Mary Lynn Rajskub of "24," "Rules of Engagement's" Patrick Warburton, Adam Carolla, Disney pop sensation Demi Lavoto, as well as E!'s very own Kendra Wilkinson, Kelly Osbourne and the Kardashian Sisters.

Along with being known as the host of "The Soup," Joel McHale currently stars on the hit NBC sitcom "Community" opposite Chevy Chase. He recently appeared in "The Informant!" with Matt Damon and voiced "Elliot" in "Open Season 2." Next he can be seen starring in the upcoming films "Spy Kids 4" with Jessica Alba, "The Big Year" with Owen Wilson and "What's Your Number?" alongside Anna Faris, Chris Evans, Ryan Phillippe and Andy Samberg.

Don't miss out on the happiest meal of them all when "The Soup's" 300th episode premieres Sunday, December 5 at 7pm AEDST only on E!