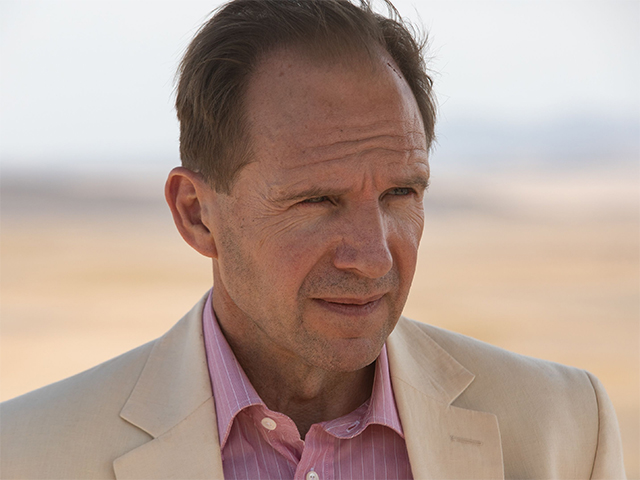 David and Jo Henninger (Ralph Fiennes and Jessica Chastain), a doctor and a children's book author, have come to Morocco from London to attend a bacchanalian weekend at the lavish Saharan home of their friend Richard (Matt Smith) and his lover Dally Margolis (Caleb Landry Jones). After a late, boozy lunch, a tired and groggy David insists on making the long drive from Tangier to the party, squabbling with Jo the whole way. But when two young men suddenly appear out of the darkness and David loses control of his car, one of them, a local teenager named Driss (Omar Ghazaoui), is killed.

The panicked couple puts his body in the back seat of the car and keeps driving to Richard's, hoping their friend can help them evade any consequences. With the local police seemingly u ninterested in investigating the matter, the party rages on unabated. But when Driss' grieving father Abdellah Ismael Kanater arrives to claim his son's body, he insists that David accompany him back to his village to help lay the boy to rest.

David reluctantly agrees to a two day drive to the family home deep in the Atlas Mountains, where Abdellah, his several wives and his only son Driss have spent their lives eking out a living by hunting fossils and selling them to rich Westerners. Alone with Abdellah, David denies any responsibility for the accident, but the Moroccan's humble dignity moves him in unexpected ways. Meanwhi le, back at Richard's compound, Jo's brief dalliance with another guest, Tom (Christopher Abbott), allows her to imagine a different life for herself.

Mysterious, mystical and often misunderstood, Morocco looms large in the imaginations of European and American travellers as a place where outsiders and outlaws can seek redemption or oblivion. The dusty medina of Casablanca, Marrakesh's famed souk and the endless Saharan deserts have attracted seekers and lost souls including Paul and Jane Bowles, William S. Burroughs, Brian Jones and Jean Genet to search for the ineffable in the North African sun.

In director John Michael McDonagh 's latest film, THE FOR GIVEN an Anglo American couple arrives in Tangier hoping for an escape from the constant gibes and insults of their failing marriage. Based on Lawrence Osborne's acclaimed 2012 novel, the film follows David Henninger, a surgeon, and his wife Jo, a now uni nspired writer of children's books, as they take a fateful ride into the Sahara. On the way they accidentally spark a clash over culture, faith and accountability in a meticulously plotted thriller peppered with biting humor and scathingly accurate observations.

"We pursued this book tenaciously," says producer Elizabeth Eves of House of Un American Activities, who has served as a producer on McDonagh's three previous features: The Guard Calvary and War on  Everyone "After building a relationship of trust with Lawrence, we eventually were granted the rights. Lawrence and John's sensibilities ar e finely attuned. Combining them has produced a powerful  screenplay."

Producers Trevor Matthews and Nick Gordon of Brookstreet Films partnered with Eves and McDonagh on the project and helped to secure financing. "Their unwavering support and fearlessnes s in the face of all the challenges has been nothing short of heroic," says Eves.

According to Matthews, he and his colleagues at Brookstreet are longtime fans of McDonagh's work. "A classic auteur in the truest sense, he's exactly the type of bold, visi onary and sure handed filmmaker we want to make movies with," says Matthews. "From our first meeting with John and Lizzie who is a brilliant and formidable force in her own right we knew it was a fit. Hearing that it was Lawrence Osborne's gripping and evocative bestseller The Forgiven that John wanted to bring to the big screen only increased our excitement."

A tense, thought provoking drama, THE FORGIVEN takes place over one weekend in the mountains and deserts of Morocco and explores the fallout of a tragic car accident that killed a Moroccan boy.

"This is a jarring and mysterious story of careless Westerners who are caught in circumstances they can't buy or talk their way out "of", says Eves. "It has an overarching air of foreboding and menace. The dialogue carries a certain weight. The result is a confident, witty and visually distinctive film that slyly exposes the assumptions we make when privilege and poverty "collide."

Osborne's skill for creating vivid, authentic characters, especially Jo and David, was what initially attracted Eves and McDonagh to the novel.Neither of them is sympathetics on the "page," she explains. And they haven't been played sympathetically. I don't necessarily want to be friends with them, but I'm fascinated by them. I want to know what they're going to get up to next.

The filmmakers selected one of Britain's most versatile and honored actors to play David Henninger. Academy Award nominee Ralph Fiennes, who sprang to international stardom with his chilling portrayal of a Nazi SS officer in Schindler's List and later morphed into the evil Lord Voldemort in the Harry Potter saga, was everyone's first choice to play Henninger, says Eves.

"There's no one else who could have played this role as well as Ralph Fienes did," she adds. "He makes David a very specific person. And that specificity lends itself incredibly well to the "character."

Undeniably boorish and argumentative, in Ralph Fiennes' able hands David is also a complex and contradictory character: intelligent, often witty and embittered by a life many would envy. "He likes to "drink," Fiennes states. "Something in him is a bit impatient and angry at life. He's a man given to pungent and often offensive exclamations and conversational gambits that are designed to cause affront. He has a tense relationship with his wife, and we feel all is not great in the marriage.

At the insistence of Driss'' father, David finds himself on a journey that is arduous not only physically but spiritually, as he struggles to remain in denial about his culpability in the 'family's grief. "In the course of that trip, far away from the world, he has a transformation, a kind of readjustment and reappraisal of life, says Ralph Fiennes. "Having killed this young Moroccan, he slowly recognizes his responsibility for it. And it's the change in him that made the part interesting for me to play. He's given up inside in a way, but something in him recognizes this is a chance for redemption, even though he could be killed by the family of the boy. He wants to be cleansed somehow by going through the confrontation. I get a lot of pungent, politically incorrect things to say, but the real drama, the real soul of it, is what happens to David on the road with the Moroccan men.

David is generally disgruntled, but finds relief from his ennui by goading his wife Jo, Eves explains. "He's an imposing character, and you wonder why Jo is with him. Jo, on the other hand, seems more accommodating and tuned-in to people, which enables her to navigate both David and the characters around them. But by the end of the film, this dynamic dramatically "shifts."

Academy Award winner Jessica Chastain, who plays Jo, appeared with Ralph Fiennes in his 2011 directorial debut, Coriolanus, and the two have remained friends. "Playing opposite each other in this film was a "joy," says Ralph Fiennes. Her coming onto the project made it very appealing. She brought a kind of reality that was crucial to playing "Jo."

Chastain says she was already a huge fan of Osborne's book before she received the screenplay. "I picked it up at the airport when it was first published, knowing nothing about it. I fell in love with it and even tried to see if the rights were available, because I thought it would be a great story to tell. When they weren't, I tucked the idea away. When it came to me in this iteration, it felt very close to the way I originally imagined it.

The actress was excited at the prospect of reteaming with Ralph Fiennes and working with McDonagh for the first time. "I am such a fan and admirer of John's work. This adaptation of the novel, which I knew really well, was quite strong. He took this wonderful source material and made a film that's filled with tension and love and regret and bitterness and fear, but also growth."

Fiennes and Chastain arrived on set with a working shorthand and a friendship, says Eves. "That was incredibly helpful. And they're both really exciting actors. Jessica is great at portraying emotions in a clever and economical way, which fits the character. Jo is more cerebral than emotional, and what she's going through is a surprise to her. But through an act of betrayal she finds herself renewed as a human being."

There is a line in the novel that Chastain says has stayed with her over the years. "Jo says at one point, 'I'm so awake. I'm "dangerous,'" she recounts. "I brought it up to John and he actually put it in the script". Jo goes on a quest of fself-discovery. When we first meet her, she's been sleepwalking. She's been living her life, feeling like she hasn'anything interesting or useful to say. She is in a numb state of "existence."

Chastain and Fiennes agree that when it came to working with the cast, McDonagh was very happily hands-off.  "John is the kind of director who leaves actors alone," says Ralph Fiennes. That said, Chastain adds, he is very particular about language. "If you miss out on a few words, he's going to want them back. On day one he told me that because Jo is British in the novel and American in the script I should ''Americanize' the dialogue. So there was a lot of freedom, but I always felt like I was in capable hands. There was always a captain guiding the ship, which is important, especially when you have such a large group of characters."