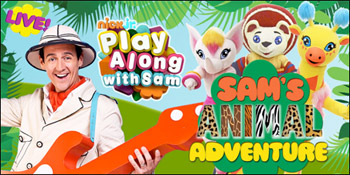 2011 ARIA Hall of Fame recipient and Nick Jr star Sam Moran is thrilled to announce his seven date national tour in April 2014 – Play Along With Sam: Sam's Animal Adventure. Based on Nick Jr.'s Play Along with Sam episode, -Zoo's Who', Sam's tour follows his search for lost sound jars and his animal friends, The Bam Bam Binos, on a fun-filled musical adventure.

Moran will perform in Adelaide, Melbourne, his home town of Wagga Wagga, Canberra, Newcastle, Wollongong and Sydney. Play Along With Sam: Sam's Animal Adventure will include songs from his hit TV series such as Dance to the Beat, Who Am I, and Cuckoo.

Moran has been nominated for his popular television series, Nick Jr.'s Play Along with Sam in the categories of Best New Talent and Most Outstanding Children's Program in the 2014 ASTRA Awards, also receiving a nomination in the Best Presenter category of the 2014 TV Week Logie Awards. Last year, Moran received a nomination for his debut album, Play Along With Sam, for Best Children's Album at the 2013 ARIA Awards. These nominations add gusto to Moran's earlier accolades, and are a celebration of his 15 year career as a children's entertainer. His international reputation was also acknowledged when he presented the -Preschool Category' at the 2013 International Children's Emmy Awards in New York.

The former lead singer of the Wiggles released Play Along with Sam in June of 2013, debuting at #1 on the Australian iTunes Children's Charts and top 10 internationally. The 20-track album is a compilation of original songs and educational tunes from his series on Nick Jr of the same title. Feature tracks include 'Dance to the Beat", 'Spaghetti", and 'Who Am I?," a dress up themed song that has firmly established itself as an audience favourite.

"LIVE shows are all about having a great time! The children have fun, I have fun and (equally importantly), the parents have fun too!" says Sam Moran.

A standout figure in the world of children's entertainment, Moran's work was amplified last year with the world premiere of his television series on Nick Jr., Play Along with Sam, a celebration of his musical, educational, and performing magic. As his new persona, Professor Sam, Moran invites the audience to join him as a 'sound explorer and musical adventurer" – capturing sounds and turning them into music.

Beyond television, Moran's music spread substantially last year through his live showcases, performing at Nick Jr.'s Play Along with Sam Westfield national tours, a regional Christmas Tour of New South Wales, and headlining the first 'Little Splendour" stage at the Splendour in the Grass festival. In 2014, Sam will perform alongside the West Australian Symphony Orchestra (WASO) in February at the Perth Zoo, and at the hugely popular children's festival, Out of the Box in Queensland in June.

Moran became a professional singer and performer while studying Musical Education at the Sydney Conservatorium of Music. After performing with the Wiggles, he released his first solo album for adults, The Colour of Love, via Sony Music Australia in 2010. Last year, Sam Moran became the first ambassador for The Sebastian Foundation, and also assumed the role of national ambassador for Variety Children's charity, performing at both of their respective Christmas Concerts.

The Playhouse, Newcastle: Thursday 24th of April
www.civictheatrenewcastle.com.au or 02 49291977