Motorcycle Riders Urged not to be Fashion Victims The TAC today launched a new campaign to encourage motorbike and scooter riders to cover up and save their skin.

The TAC's Senior Manager of Road Safety, David Healy, said the television advertisements are timely considering that in 2007, motorcycle registrations grew by more than eight percent.

"Motorcycles are a part of city living and with the rise in popularity of motorbikes and scooters, the TAC aims to help riders to make safe choices on our roads," he said.

"Riders are 34 times more likely to be seriously injured than motorists, but these odds can be improved significantly if riders purchase and always wear full protective clothing. It's an investment that could save a person's life."

Motorcycles account for less than one percent of the kilometers traveled on Victorian roads. So far this year, there has been a surge in rider fatalities, with 16 killed compared to eight for the same time last year. 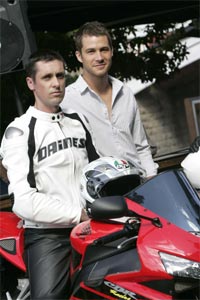 Director of Emergency at the Austin Hospital, Dr Fergus Kerr, said he's seen too many disfiguring injuries in his twenty plus years working in emergency departments. "When riders come off bikes at high speed without protection, it's their bodies that bear the brunt of the impact," he said.

Neil O'Keefe, Chair of the Victorian Motorcycle Advisory Council (VMAC) has strongly backed the campaign saying "we have so many new riders on the road and it's important they are well trained and wear the right gear."