This Valentine's Day, Bumble, the social networking app with nearly 50 million users worldwide, is hosting the world's longest Valentine's Day party, in celebration of the millions of first moves being made across the globe. The 'Domino Effect' is based on the concept that every time a woman makes the first move - whether that be in dating, friendship or business - it empowers other women to do the same.

Kicking off in New Zealand on February 14th and travelling through Australia, India, into Europe and concluding in America, the exclusive event is open to all Bumble users in their respective cities.

In Sydney the event will take place at Ivy Pool Club in the CBD, a rooftop oasis inspired by the Italian coastline. The event will include an all-female DJ line up with sets from Flex Mami, Alice Q and Kinder. During the party Bumble will bring to life its female-first proposition with experience, interactions and exercises that will leave guests feeling inspired to make the first move in all aspects of their lives. A live digital mirror will feature uplifting affirmation projections, and the event will also see guests enjoy a performance from synchronised swimmers, the Bumble flower throne, interactive food stations, Bumble merchandise and Bondi lifeguards on standby.

Notable Australian singles such as Tully Smyth and Alli Simpson are expected to attend the party. Michelle Battersby, Bumble Australia Country Lead, said: "At Bumble we understand the power in making the first move. Empowered women empower others, and we are proud to be known as a brand that is committed to championing first moves for women in all aspects of their lives. We are so excited to be one of the first markets to be kicking off 'The Domino Effect' Valentines Day event and encourage all our Sydney Bumble users to sign up to attend what will be the party of the year." 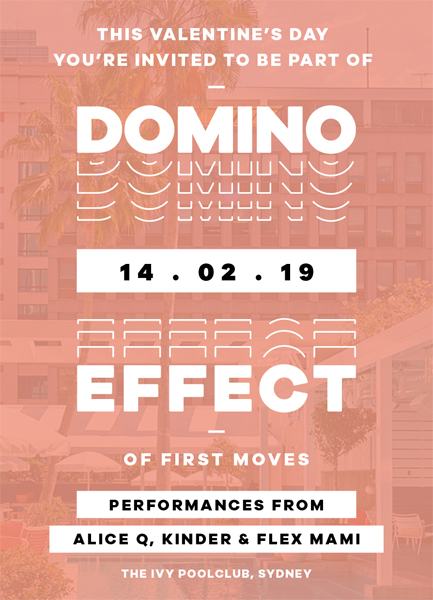 Tickets are free and users can sign up by downloading the Bumble app in the App Store and Google Play. In addition to The Domino Effect, Bumble will also be presenting a Valentine's Day pop up at Wynyard Park from 7:30am on February 14th. The pop up will feature a flower cart with free yellow roses, and a yellow phone booth which speaks positive affirmations through the receiver when users dial. Bumble is the first app of its kind to bring dating, friend-finding, and career-building to a single platform via Bumble Date, Bumble BFF and Bumble Bizz. All three Bumble modes are rooted in encouraging empowering connections, respectful conversations and meaningful interactions. Bumble is free and available to download in the App Store and Google Play.

Bumble, the dating and networking app with nearly 50 million users connects people across dating, friendship and professional networking. No matter the type of relationship, women make the first move on Bumble. Bumble recognizes the importance of relationships and how crucial they are to a healthy, happy life. They've built their platform around kindness, respect, and equality – and their users play an important part in that. Bumble holds its users accountable for their actions and has zero tolerance for hate, aggression or bullying. Bumble is available in 150 countries. Since 2014, Bumble has facilitated over half a billion women-led first moves and over four billion messages sent. Bumble is free and available in the App Store and Google Play.

Question: Can you briefly tell us about Bumble?

Michelle Battersby: Bumble is a women-first social networking platform that allows women to make the first move in dating (Bumble Date), friend finding (Bumble BFF) and business networking (Bumble Bizz). When we first launched in the US in 2014, we changed the game by putting women in control. In just four years Bumble has experienced phenomenal growth - we just recently hit 50 million users globally, which is a huge milestone for our teams around the world. In Australia we hit 2 million registrations in January - Australian women have made the first move over 31 million times and over 341 million messages have been sent through the app in the market.


Question: What do you hope guests will achieve at Domino Effect, the world's longest Valentine's Day party?

Michelle Battersby: At the Domino Effect party on Valentine's Day, we will bring to life Bumble's women-first proposition with experiences, interactions and exercises that will leave guests feeling inspired to make the first move in all aspects of their lives. We will have everything from a digital mirror that gives you positive affirmations, to our famous Bumble floral throne, interactive food stations, Bondi lifeguards on standby - even a performance from synchronized swimmers! Of course, we also see this as an opportunity for our users to make connections in a real-life environment where it is fun and safe to do so.


Question: Where should we find outfit inspiration ahead of the Domino Effect party or a Valentine's Day date?

Michelle Battersby: Remember it is not about how you look but how you feel. Any outfit that makes you feel confident and empowered is the right choice. Also use this as an opportunity to show off your personal style, which can communicate so much about who you are as a person!


Question: Are you able to share your top tips on how we can get more matches, on Bumble, in the lead up to Valentine's Day?

Michelle Battersby: The more you can use your profile to communicate to your potential matches who you are and what you are looking for, the more likely you are to get quality matches. This means things like lots of photos of you doing things you enjoy and a detailed bio that can help spark a conversation.


Question: What advice do you have for those of us who are reluctant to make the first move whether on Bumble or in-person?

Michelle Battersby: Don't be afraid to take the first step! It can seem daunting, but our research tells us that the men on Bumble love that women make the first move. If you are unsure of what to say, you can use our "conversation starters" feature that provides some example opening lines to help you break the ice and get a chat going.

The most effective opening lines have an element of humour or open the conversation in a way that encourages the other person to respond - for example referencing something you noticed in their bio or photos that you have in common. Also don't forget to make it personal by using their name!

You're more likely to get a good response if you say something more personal than just "hey!". If you need some inspiration, try out our conversation starter generator here. 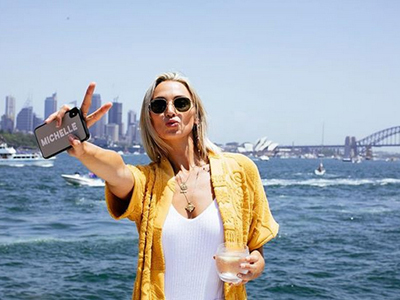 Question: How will you be celebrating Valentine's Day?

Michelle Battersby: At the Bumble Domino Effect Valentine's Day party of course! The 'Domino Effect' is based on the concept that every time a woman makes the first move - whether that be in dating, friendship or business - it empowers other women to do the same. This is a global event we have created for our users, and Sydney is just the second market to kick off (after Auckland), and we will be followed by India and Europe before in concludes in the US. If you want to be one of the thousands of people to take part around the world it is not too late - just match with the Domino Effect card in the app to register.


Question: What's the biggest Bumble challenge you've had to overcome?

Michelle Battersby: When Bumble first launched in Australia not many people had heard of the brand, and dating apps had a very negative stigma attached to them. People had a lot of reservations about using dating apps and I even found it hard to hire people. While Bumble launched as a dating app with a mission to empower women worldwide, we have grown to become much more than just a dating app. We're now a social networking app that connects you to new people in friendship, business and dating. It's been exciting to see the growth that we've had since. In the last two years, we've had over 2 million registered users on the app and receive feedback every day on how much they love using it!"


Question: Can you share your best productivity tips with us?

Michelle Battersby: I try to get into the office early every day - usually around 7am before my team arrives. This helps me get a head start on my work before the day kicks off.


Question: What's next, for Bumble?

Michelle Battersby: For us, now that we are very established in the market, it's about looking at ways we can add value to our users - whether that be through events, activations, partnerships, special offers etc. As always, we will continue to stay laser focused on our mission and always put our users first.