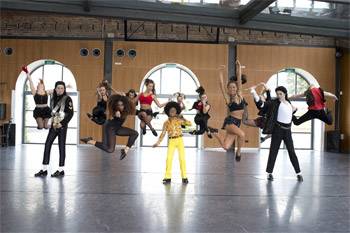 Michael Jackson was today celebrated by some of Australia's most promising dance students from Brent Street, paying tribute to the much loved 'King of Pop", on the anniversary of his signature move, The Moonwalk.

Created by Madame Tussauds artists, the figures capture Michael in three of his most iconic looks: as a child in Jackson 5, performing Smooth Criminal in the 90s, and in the This Is It performance right before his death. With each wax figure taking over a staggering 800 hours to complete, Madame Tussauds staff were thrilled to create the ultimate tribute to one of music's biggest stars.

'We are extremely pleased to be able to showcase Michael Jackson in his many incarnations. With a career spanning over 45 years, it is impossible to pinpoint his most prolific moment so instead we bring you Michael Jackson through the ages. Each figure was made with the utmost precision and care and we hope that his fans will appreciate this unique series", comment Quinn Clarke, General Manager, Madame Tussauds Sydney.

Michael Jackson's contribution to music and dance has made him a global figure in the popular culture for over four decades. Jackson's 1982 album Thriller is the best-selling album of all time and Michael is the most-awarded recording artist in the history of popular music.

'Michael Jackson is a true performer and he has been a huge influence in my life. It has been absolutely incredible to dance alongside his wax figures as he is one of the reasons I fell in love with dance." Commented Chaska Halliday, Brent Street student.

With the travelling trio now in Sydney till the end of May, visitors have the chance to sing a tune and bust out their best Moonwalk impersonation with their favourite Michael.

To find out more about Madame Tussauds Sydney and the great Australian and international figures it is already home to, visit: www.madametussauds.com/sydney