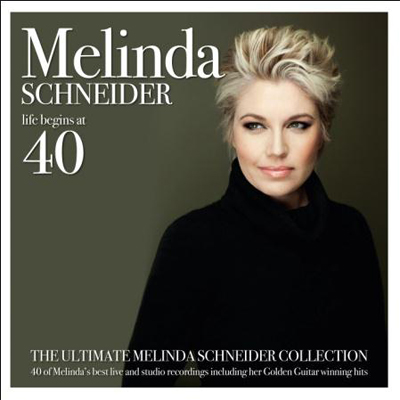 For over a decade now Melinda has been a leading light of the 'new-breed' of Australian Country artists both in Australia and the US. In a career which began with a stage debut at the age of three, (appearing with her mother, the legendary Mary Schneider) she has kept her family tradition alive by becoming one of Australia's most sublime singers and popular live performers. But it is through her assured and accomplished song writing that she has really discovered her true voice.

Since her most popular and requested song, 'The Story Of My Life' won her the first Golden Guitar for Female Vocal Of The Year at the CMAA Awards in 2003, Melinda has continued to make her mark. Two Gold Records, two ARIA nominations and five more CMAA Awards for Best Album, Best Song, Best Vocal Collaboration and Top selling album followed.

This Ultimate Collection includes everything from Melinda's biggest hits 'I Wanna Be Married', 'Be Yourself', 'Can You Hear Me Down The Hillside', 'The Story Of My Life', award winning duet with Paul Kelly, 'Still Here' and three different versions of the anthemic 'Courageous', featuring the Australian Girls Choir and a duet with Olivia Newton - John to choice tracks from the album Melinda Does Doris. Some rare songs from the vault also appear, such as Melinda's very first dance hit 'Tighten Up Your Pants' by (Audio Murphy feat. Melinda) and her first two recordings at age eight, 'Santa Call On Me' and 'I Just Wanna Yodel Like You' a duet with mum, Mary.

Over the last 12 months, Melinda's career dimensions have broadened dramatically as she dazzled with her performances on Dancing With The Stars and released her first tribute album Melinda Does Doris, which debuted at #1 on the ARIA Jazz and Blues chart and stayed there for nine weeks.

It's been quite a run. Asked to look back over not just 40 years of life on the big blue marble but upon 32 years as a recording artist, Melinda's thoughts run along the lines of, "You can't change the past, it is what it is. You can only take what you've learned and apply it to the future... and be at peace with the present, and I am. Yes, I DO feel like I'm still just starting, I'm so much more free, I feel like I could try anything - now I want to do an album with an orchestra, an album of gritty, soulful songs, other things." Melinda is currently touring her brand new stage show DORIS - Doris Day - So Much More Than the Girl Next Door. Co-written by Melinda and David Mitchell (Dusty/Shout), this musical tribute to Melinda's idol Doris Day, could also be the universal story of women set to the music of the 40's, 50's and 60's.

Question: What inspired Life Begins at 40?

Melinda Schneider: My big milestone birthday inspired, Life Begins at 40. I decided instead of freaking out and having a midlife crisis that I would celebrate it and wanted to release this ultimate collection album.


Question: Can you talk about recording disc 2 of Life Begins at 40?

Melinda Schneider: Yes, a lot of the tracks from disc 2 are live and I recorded them at Tamworth in 2009 at TRECC, which is a live show that I have often performed at Tamworth. I think it is a great recording with a fantastic audience. I have cross-sectioned all of the songs that people know from me, they needed to be on Life Begins at 40.


Question: Life Begins at 40 features duets with Mary Schneider, David Campbell, Olivia Newton John, and Paul Kelly - how was it working with other artists?

Melinda Schneider: Mainly real life experience and different things that happen in your life that you learn lessons from or people you meet. I am inspired by quite ordinary things from everyday life.

Melinda Schneider: I like so many different styles of music including pop artists like Sting and Sheryl Crow and I like Bluegrass music - Ricky Skaggs is my favourite Bluegrass artist. I like jazz and of course I listen to a lot of Doris Day; I listen to a whole cross-section of material, really.

Melinda Schneider: No, never, I love what I do and it's very much in my blood and I think I'm going to be doing this for the rest of my life.

Melinda Schneider: I love them both for different reasons; I definitely enjoy doing them both because you get a different thrill out of doing each one.

Melinda Schneider: The duets would have to be a highlight, working with other artist who I really admire is a big thrill, for me and especially when other people record songs that you've written, that is the biggest thrill you can get.

The bad things encourage song writing, it's harder to write when you're happy!