Synopsis: Dragged Across Concrete centres on veteran cop (Gibson) and his volatile younger partner (Vaughn), who find themselves suspended when a video of their strong-arm tactics becomes the media's cause du jour. Low on cash and with no other options, the two embittered defenders descend into the criminal underworld, but find much more than they wanted waiting for them in the shadows. 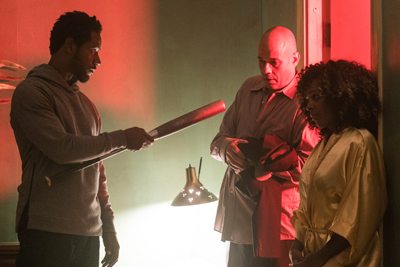 Dragged Across Concrete was filmed over eight weeks on location in Vancouver and Surrey, British Columbia during August and September 2017. The film, produced by Keith Kjarval of Unified Pictures and Dallas Sonnier of Cinestate, was written and directed by S. Craig Zahler.

Dragged Across Concrete was the first feature script that I wrote after the release of my directorial debut, Bone Tomahawk. Although challenged"and at times hobbled"by the limited resources at my disposal on that western picture, it was incredibly satisfying to bring a script of mine from the white page to the silver screen. Much of my performance-showcasing directorial approach was reprised and better realized in my second motion picture, the prison thriller Brawl In Cell Block 99 (which stars Vince Vaughn, Jennifer Carpenter, and Don Johnson). Both pieces exemplify my interest in making rich genre fiction that has multiple viewpoints, complex characters, scenes that breathe, and moments of drama, comedy, and surprise.

For my third movie, I wanted to make a suspenseful crime drama with an ensemble like those found in Prince Of The City, Taxi Driver, Dog Day Afternoon, and The Sweet Smell Of Success. No script of mine better displays my continuing interests in complicated characters and unlikely plotting than Dragged Across Concrete. As is often the case in my novels and screenplays, the protagonists are in perilous circumstances against which they struggle in different and surprising"though logical"ways. At the start of this story, two long-time police partners, Ridgeman (Mel Gibson) and Anthony (Vince Vaughn) are suspended for use of excessive force during the arrest of a known criminal. These two flawed, but decorated officers are ostracised for their behaviour and soon find themselves reconsidering their moral codes. They are neither innocent good guys nor amoral bad guys, but human beings who do both commendable and dubious things: these two cops have no easy choices if they want to provide for their loved ones.

Apart from this pair, but no less conflicted, is the third protagonist, Henry Johns. This young black man, recently released from prison, soon discovers that his mother has returned to prostitution, which she practices in the house wherein lives his disabled brother. Disgusted with the situation, the newly freed ex-convict returns to the underworld that sent him to jail to earn some quick cash.

Surrounding this trio is a large supporting cast. Included in this group is the frustrated Melanie, a tough former cop (and Ridgeman's wife) who was forced to retire from law enforcement at a young age because of a disability. There's also Biscuit, the slightly successful wheedling criminal, who is a childhood friend of Henry Johns and his partner in a new criminal undertaking, and Denise (Anthony's fiancé), an inquisitive and very observant social worker. Elsewhere is Kelly Summer (Jennifer Carpenter), a distressed young mother who must return to her job at a bank and leave her newborn baby for the first time. Lieutenant Calvert (Don Johnson) is another distinct face"Ridgeman's high-ranking former partner who offers his cohort some critical advice that may or may not be heeded. 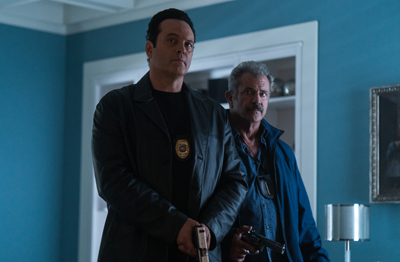 The scope and amount of plotting of this large movie required a more detailed visual style than the handheld kind that I used on my previous pictures, but the overall approach had the same end goal: never distract the audience from the characters and the story. Although there are many highly stylized movies that I adore, my own approach to filmmaking is performance centric. I never want the camera choices that I make to get between the actors and the audience. I want the audience to connect as directly with the characters as possible, and in my view, elaborate crane shots and canted shots and flashy filters and long lenses work against this idea, as do using close ups as the default shot size (most things in life are not viewed in close-up and people often express themselves with their hands). Still, I worked as a cinematographer for years and have great relationships with my returning cinematographer and the look of Dragged Across Concrete was carefully planned in terms of lighting, colour palette, and use of shadows in order to create strong atmospheres and expressive tones with these visual elements. My approach to music was also non-intrusive and precise. Because I have faith in the script and the actors, I don't need to tell the audience how to feel about what is happening. The emotions should come from the content of the film, and if they don't, I don't want to force it down somebody's throat with "sad" music or "suspenseful" music. With my editors, I cut the entirety of Bone Tomahawk and Brawl In Cell Block 99 with zero music in place, and afterwards, once every scene worked to its maximum potential, I added musical grace notes in the right spaces with my co-composer, Jeff Herriott. The scope and environment of Dragged Across Concrete is bigger than those pictures and there is a larger sense of American communities and how they do and don't co-exist. In this modern concrete landscape, a jazz orchestra illustrates the many hues of Ridgeman, Anthony, Henry Johns, Biscuit, Melanie, Kelly Summer, and the others who struggle to find their melodies. Herriott and I show influences of hard bop composers/leaders like Charles Mingus (Black Saint and the Sinner Lady), John Coltrane (Africa Brass), and Oliver Nelson (Blues and the Abstract Truth) as well as the great modern jazz leader Maria Schneider (Thompson Fields) and the jazzy Taxi Driver score by Bernard Hermann (one of his best), though our senses of melody and harmony are quite different and resulted in a unique take on composed, orchestrated jazz.

Cinematic reference points are difficult outside of my own two movies, but I can point to some favourites of mine that achieve my ultimate goal through very, very different means. Prince Of The City, Hana Bi (Fireworks), The Cook, The Thief, His Wife, And Her Lover, The Killing, Heat, Bridge On The River Kwai, Ping Pong, Nashville, The Sweet Smell Of Success, Taxi Driver, Gun Crazy, and The Wild Bunch all achieve something more than the mere telling of a story. Each of these pictures has distinct characters, narrative momentum, and moral complexity, but the sum of these elements is a far greater thing. Each of these movies is a vivid fictional world. Whenever I watch these pictures, I have a sense of a world and the lives beyond the events shown in the movie. These are the movies that turned me into a committed movie fan and works of art that will survive and make people ask questions rather than spoon feed them answers like so many didactic movies do today. The actors' faith in my script and direction, and my dependable cinematographer Benji Bakshi helped me navigate this difficult production and create Dragged Across Concrete.