Born in 1986 to Cocktail actor Bryan Brown and well-known actress Rachel Ward, Matilda Brown considered a career in the film industry at a young age. At 15 years old Matilda was cast as the lead in the SBS 50 minute short film Martha's New Coat. After graduating from high school, she moved straight to Melbourne to study Film and Television at Swinburne and subsequently Screenwriting at RMIT. In 2009 she moved back to Sydney to begin a career as a writer, director and actor. People told her you can't do all three, to which she says 'I love them all equally, so why not?'

She wrote, directed and stared in the film How God Works, which was a finalist in this year's Tropfest (2010). Matilda has recently signed on as a freelance director for acclaimed advertising identity David Gaddie's The Colony. Matilda will also feature in Underbelly: The Golden Mile.

Make an Ad, Make a Fortune

Doritos' next TV commercial is in the hands of the Australian public.

Doritos is inviting creative minds, film fanatics, aspiring advertising creatives and those who just love their home video camera to come up with the next TV ad for Doritos. This is the second year Doritos has handed creative control over to the Australian public, after last year more than two thousand ads were submitted from across the country.

Aussies are being asked to create a 29 second TV commercial featuring Doritos, with the winning entry to get up to $50k1 and see their ad broadcast on primetime TV.

A panel of experts has been selected to judge the competition, including:

Matilda Brown - An actor, writer and director, Matilda was a finalist in this year's Tropfest for the film How God Works, has a role in the current season of Underbelly: The Golden Mile and is enjoying a variety of work as a freelance director.

After selecting their favourite three ads, the judges will hand over to the Australian public to choose their ultimate favourite. 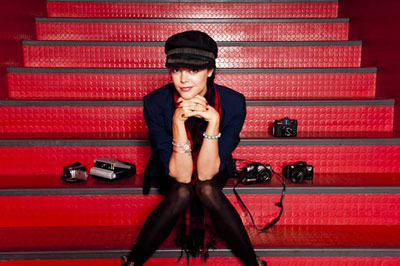 Here Matilda Brown shares her expert tips for creating an original, engaging television ad. Grab a bag of Doritos and have a read - this is invaluable advice!

1. Where to start?
Look at other commercials. How many shots do they use to tell the story? How is each shot composed? What information is told in each shot? By studying ads you'll get a sense of the different ways they can be told.

2. Cracking a good idea
Often a good idea comes in the shower, while driving or sitting on the loo! But sometimes you need inspiration on a deadline, so it can be helpful to sit down with a notebook for a couple of hours. Write everything that comes into your head - no matter how ridiculous you think it is - just keep writing. After your session you will have a notebook of ideas to go through. Pick a couple to pursue.

3. The Big P
Preparation isn't the most exciting part of the process but it's crucial. Don't rush it. On the day you want your team to already be speaking the same language, not looking at each other blankly.
Storyboards and shot lists are a must. Don't worry if you can't draw. Stick figures are fine! On the night before the shoot allow yourself to switch off and get a good night sleep - you'll need a huge amount of energy for the big day/s ahead.

4. Handy Hints
- Your ad has to be exactly 29 seconds. Not a frame more or less. Make sure while you are shooting you are timing your shots so you are keeping to time. Don't be overly precious with every shot - remember you're on a tight schedule. It's also worth reviewing the rules and guidelines to make sure all your effort doesn't go to waste!
- As the director you are the leader of your team and that comes with expectation and pressure. Your team will ask you questions and expect you to give them an answer. Relax! No one knows the answer to everything! Not even the most experienced directors in the world. As long as you have a clear vision and have done your preparation, you'll be able to guide them in the right direction.
- On the day: Bring your A-game. Once on set you're like meat to a pack of wolves. And you'll be working and thinking harder than ever. But it's worth it!
- You don't have to have money to come up with a great idea. Be clever with your creativity and vision. If you can't pay for a real studio set, make one out of cardboard. If you can't afford a crane, use a ladder, find a hill or stick the camera on a pogo stick. Be inventive!
- Use a tripod unless you want a hand-held effect. Trolleys, skateboards, wheelchairs make for inexpensive tracking shots.
- Quality sound. One of the giveaways to an amateur production is poor quality sound. It's worth investing in hiring a microphone to make sure the sound is crisp and clear. Also, record atmosphere tracks (60 secs of the location sound with no dialogue) to use to cover sound holes in the editing and specific sound effects (like car doors, phones ringing) to emphasise in the sound design.
- Treat your team with the respect they deserve - especially if they're helping you out as a favour. Remember, a crew can't work on an empty stomach. Make sure there's plenty of food, drinks and snacks on set.
- Look around for talent. Some of your mates should be in front of the camera, others should not! See which of your friends and family would be suitable.
- Finally, make doubles of all your master tapes so you never lose your precious work.

1 Doritos is accepting entries until 5pm on 26 July 2010. Up for grabs is a major prize of up to $50,000 - made up of $25,000 in prize money, plus $1 for every vote received as a finalist, up to a further $25,000. Two runners-up will win a Sony film editing package valued at over $11,000 and the rest of the top 10 will win $2,000 towards a Film Production course of their choice. Prizes can also be scored simply by voting for your favourite ad with 71 Sony Bloggie pocket camcorders being given away.
For more details visit www.doritos.com.au 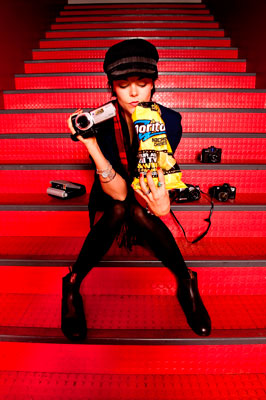 Why have you joined the panel of Make an Ad, Make a Fortune?

Matilda Brown: I was already considering my Doritos Ad idea when I was approached to be part of the judging panel. So I figured why not use this opportunity to encourage budding film makers to get off their bums, put their creative hats on, get their mates involved and have a go. Sometimes that's all people need, a little encouragement. And I'm lucky to have had a lot of that in my life.


Many Australians have never created a film, how can they make a great, winning video for an Ad, Make a Fortune?

Matilda Brown: I think it's personal. My advice is don't over think your concepts. In the advertising world simple often works best. In 30 seconds you have very little time to sell your idea so don't confuse the audience with too much information. Consider your audience. Find your vision and go for it. Most importantly everyone has to start somewhere, so it's okay if it's not perfect first time round. You'll get better!


Can you tell us about your role in Underbelly: The Golden Mile?

Matilda Brown: My role is very small! Blink and you'll miss it. I play Ellie, Joe Dooley's wife. She wears the pants in the relationship.


Do you have a preference, writing, director or acting?

Matilda Brown: I write so I can direct and act - it's something I work very hard at. I envy those people who can churn out a great script in a first draft! Acting and directing feels more natural to me so I guess they tie equal first. I do love writing though, it's very cathartic.


When you are writing, what inspires you to create a great storyline?

Matilda Brown: I'm inspired by real people and personal experiences. I'll create a story around a character if I think they're interesting enough. An idea can come from the simplest of moments but if it moves me or intrigues me, I'll want to write about it.


Do you think your parents, Bryan Brown and Rachel Ward, inspired you to believe that filmmaking was the only way to go?

Matilda Brown: My parents have definitely been an influence on my chosen career path and they are incredibly encouraging. But I think that would extend to any career I decided to peruse. It just so happens that storytelling and filmmaking is what interests me and excites me more than anything else in the world.


What's next for you in terms of filmmaking and acting?

Matilda Brown: I'm on shoot at the moment. But I can't say what for. Its a project that my company Big Brown Films is producing that I'm also directing and acting in so there's a lot to do but it's so much fun. I can't wait for people to see it... I think they'll love it.

I've also just signed with a company called The Colony as a freelance director. And I've got a small part playing a cop in Rake.


What is the biggest challenge you have faced along the way to your acting/filmmaking success?

Matilda Brown: The fact that people know me as Rachel Ward and Bryan Browns daughter is both an advantage and a challenge. I'm aware of how lucky I am to have successful parents in an industry I aspire to do well in. Yet there's an expectation that comes with that. A pressure. It's hard to ignore that. I'm 23 so I'm sure there'll be more challenges ahead.


What advice do you have for other young Australians wanting to get into the acting and film industry?

Matilda Brown: Be assertive. Know what you want and go for it. It's a tough industry but that's part of It's allure. If you love it and you have a passion for it you'll do it regardless of what people, critics, parents or friends tell you. Back yourself.


How did it feel to see yourself on the big screen?

Matilda Brown: It's like the first time you tell someone that you're in love with them. You hold your breath and hope that they love you back.

Matilda Brown: I can only speak for myself- my fiv top requirements are: Love, fruit, my runners, creativity and travel.