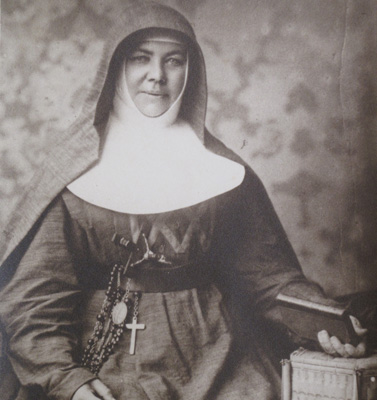 For the first time on television ABC TV's Compass program reveals the true story behind Mary MacKillop's controversial excommunication in a one hour documentary to premiere a week before her canonisation.

For Australia's five million Roman Catholics Mary's canonisation by Pope Benedict XVI in Rome on Sunday 17 October, 2010 will be a moment of enormous significance: a 'good news' story for a church rocked by ongoing sex abuse scandals, declining congregations and questions about its relevance in the modern world.

In the week leading up to this historic event Mary, Miracles & Saints is a compelling documentary charting Mary MacKillop's life and times with all its dramatic twists and turns: her road to sainthood, her two 'miracles' and what will really surprise - the crime which triggered the dramatic chain of events that led to her infamous excommunication in 1871.

Mary had been a nun for only four years when she was excommunicated by Bishop Sheil of Adelaide from the Roman Catholic Church and the order she co-founded, the Sisters of St Joseph of the Sacred Heart.

It was the church's harshest penalty. She was 29. She had no money and no-where to go. For five months she survived on the kindness of strangers until the Bishop absolved and reinstated her.

But Mary's troubles were far from over. As well as being excommunicated, she was later thrown out of three church dioceses and accused of being an alcoholic.

So how can a 19th century nun with such a contentious past be now recognised as Australia's first saint?

By any measure Mary MacKillop was a remarkable woman. As well as co-founding and leading one of Australia's first religious orders, she sailed alone to Rome to meet the Pope, she lived a life of poverty according to her order's vows, and she devoted her life to teaching and helping the poor.

Mary MacKillop and her Sisters of St Joseph of the Sacred Heart founded hospitals and orphanages. They provided shelters for the homeless, former prostitutes and unmarried mothers. And they raised all of the money themselves, mostly by begging.

As well as charting Mary's life story, this documentary examines the process of saint making in the Roman Catholic Church; the procedure's long history and relevance in the modern world; in particular its contentious requirement for not just one, but two miracles to support a 'cause for sainthood'.

It looks in detail at the two life-saving 'miracles' attributed to Mary's intercession, the exhaustive 25 year search to identify them, and the detailed research and documentation required to 'prove' them to meet the Vatican's stringent requirements.

Today Mary MacKillop's tomb in North Sydney attracts hundreds of visitors every week. Many go to pay homage to Mary. Others simply go to pray. And for some, their faith in Mary's ability to perform a miracle is their last hope.

Filmed in Penola, Adelaide, Bathurst, Sydney and Rome and featuring interviews with priests, nuns, medical experts, academics and biographers Mary, Miracles & Saints seeks to understand Catholic Australia's ongoing love and devotion for Mary MacKillop; to find out why her passion for God and compassion for people has left such as lasting legacy.