Marcus Riley Tech For Over 60 Interview Technology is a phenomenon helping define the modern age and is largely considered the domain of younger generations. This view however, is being continually challenged. According to Positive Ageing Advocate, Author and Director of Global Ageing Network, Marcus Riley, the emerging generation of older people are becoming increasingly engaged with technology and influencing its design and application as they recognise its role in successful ageing.

Although they might have found it difficult at first, older people are actively using technology with 85 percent of people aged 65 years and older using the internet at least once per day. Despite older Australians using the internet less frequently than their younger counterparts, the percentage of people using it and the amount of time they spend using it is only set to rise, as people adapt and recognise the positive impact that technology can have on ageing.

Riley explains, "Technology has clearly evolved greatly in recent years and is being used to help enable successful ageing. The once resistant, older generations are engaging with technology to not only help them maintain their quality of life but in some instances, even improve it. The use of technology by older generations has enabled gains to be made across various areas of people's lives including their health and wellbeing, social connectedness, independence, mental stimulation, security and fun."

"An interesting thing to note is that older generations are even influencing the development of technology as it adapts to meet the demands of our ageing population. Tech companies and providers are increasingly open to considering what end users (such as seniors) want and need from their technology. There are even tech conferences held in Silicon Valley that specifically focus on older generations," added Riley.

Increasingly older people are seeing technology as an opportunity to be embraced rather than an obstacle to avoid or be overcome. This is indicative of the capability and desire people have to be engaged, independent and in control. This openness is matched by the tech industries increasing awareness of the huge cohort of users that our ageing population is creating.

Here, Riley identifies six ways in which technology is being embraced and playing a positive role in the lives of older Australians in everyday living:

"The popularity in consumer health and fitness wearables and simple devices, offer seniors an empowering way to take their health into their own hands and become actively involved in managing it. The data collected on such devices can also be really beneficial for their health practitioners to provide more insightful advice as to exercise regimes, goal setting and dietary intakes. Additionally, there are numerous devices that can assist in managing health conditions such as prompting an individual's adherence to medication, monitoring of one's blood, heart and respiratory levels," he added.

# 2 – Tool for social connectivity
Riley says "Social connectedness is integral to the wellbeing of all individuals and that becomes even more important as we get older and the risk of isolation increases. There are countless technologies available which older people are utilising to connect with family, friends who may be near or far, as well as engaging with interest groups. The use of social media platforms by older people has been constantly increasing over recent years, indeed the fastest growing age group for use of social media is the group aged 65 years and over."

# 3 – Being part of the e-economy to foster independence
"Throughout our adult lives, most of us are able to determine our own actions and decisions but as we reach our older years, the scope of independence can diminish as a result of changing mobility or health," said Riley. "Activities we once did and took for granted can become much more difficult either through lack of transport or access. Advances in technology such as internet banking and online grocery shopping have really aided older Australians maintaining their independence and autonomy. Statistics show that more than half of older internet users perform banking transactions online (53 percent) and just under half (48 percent) paid bills online and up to four in 10 shop online, so people are certainly adapting and capitalising on these technological advances," added Riley.

#4 - Mental stimulation
"We have all heard before that keeping the brain active and learning new things is a great way to protect your brain from deteriorating. The act of the older generations to simply learn how to use a new technology provides great mental stimulation but furthermore the different apps and programs available for games like Suduko to online courses provide excellent avenues for the over sixties to both explore and delve deeper into areas of interest," said Riley. "We're also witnessing the emergence of seniorpreneurs that are conducting business activity through use of IT equipment, software and communication platforms," he continued.

# 5 - Security and peace of mind
"For those who are caring for a spouse or older family member with advanced health conditions different technology aids are creating new options for support in terms of security and peace of mind. For example, activity-based sensors around the home can provide discreet reassurance about a loved one's movements and activities, providing alerts if needed. Other devices can enable a remote family member, care-giver or emergency response service to provide support either in planned times or in emergency circumstances. Newer wearable devices are also becoming more widespread without the stigma of previous versions that some people did not like," said Riley.

# 6 – Fun, learning and engagement
"Whether you are pursuing lifelong learning, engaging with business or employment activities, or simply want a fun past time, technology is helping older people do it. New and varied opportunities are being embraced by people for different purposes. Some are using online platforms to study, and research topics of interest be that formal or otherwise. Senior-preneurs are supporting their business activities through IT tools as well as those performing on-the-job tasks from the comfort of their home office or a shared working space. Of course, for many it's the fun of playing their favourite board or card games on their device – often against other players to fire up their competitive juices!" said Riley. 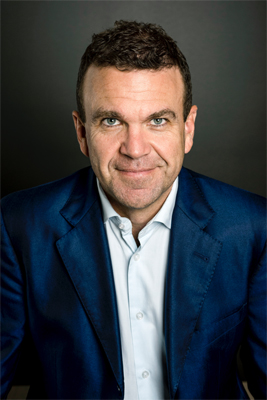 From an early age, Riley has always had a passion for older people and an interest in age services. Riley studied business management and has worked in the ageing industry for the past two decades, providing leadership and influence on local, national and global levels.

Riley is the immediate past chair and current Director of the Global Ageing Network and a member of the Steering Committee for the Global Alliance for the Rights of Older People (GAROP). He is also the Focal Point for the Stakeholder Group on Ageing (an agency of the United Nations) for the Asia-Pacific region. Additionally, Riley is the author of Booming: A life-changing philosophy for ageing well.

Riley is Chief Executive Officer of BallyCara, a charitable organisation and public benevolent institution which provides accommodation, health, and care services for older people as well as a range of support and advisory functions to service-based industries.

Question: Why do you think older people have begun actively using technology?

Marcus Riley: The emerging generation of older people have embraced and influenced change at other stages of their lives hence are open to engaging with new opportunities. Also design and application of technology has continued to involve making it more accessible and of value to more people.


Question: How are the over sixty age-bracket influencing the design and application of technology?

Marcus Riley: In part by rejecting technology they don't like such as wearable devices that are 'less than subtle' or platforms that are too cumbersome to navigate effectively such as the Government's My Aged Care website. Of more recent times we are seeing large tech companies in places like Silicon Valley committing to co-design processes that see older consumers informing the design of new technology.


Question: How can younger generations encourage family members over 60-years-old to embrace technology?

Marcus Riley: By not speaking in disparaging terms about older people and use of technology and discarding the negative stereotypes. By giving people devices and tools to 'test drive' rather than a rapid verbal run down on what their using. By investing time with family members to do things 'with' rather than 'for' when it comes to technology.


Question: What is the best piece of technology to introduce, first?

Marcus Riley: A tablet device is proving to be a great starting point for many people, I believe for two reasons. Firstly, it's obviously a portable device which is an important step in embracing technology to use more frequently – in different ways and in different places. Secondly they are large enough for people to feel comfortable in trying to operate and trust what they're seeing with a plethora of applications to suit individual need and preferences.


Interview by Brooke Hunter
Photo by rawpixel on Unsplash