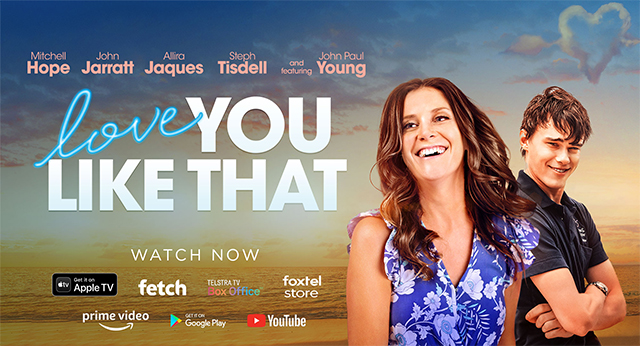 The charming Australian romantic comedy Love You Like That – starring young up and comers Mitchell Hope and Allira Jaques – is coming to Digital just in time for Valentine's Day.

Fresh from its crowd-pleasing screenings at The CinefestOZ Film Festival and The Border Mail Film Festival, and a successful run across Australian cinemas in 2021, the sweet, funny and wonderfully uplifting Aussie romantic comedy Love You Like That is now set to win hearts with its Digital release on February 9. After a summer of Covid, lockdowns, and all-round bad news, Love You Like That is the warm, totally inclusive cinematic embrace that Australia needs right now.

From producer Sean Gannon (Daddy's Little Girl, Charlie's Farm) and exciting debut writer/director Eric C. Nash, Love You Like That is literally alive with love, warmth and romance, all dished up with a distinctly Aussie flavour.

The film begins with John Jarratt's Roy discovering a naked young woman washed up on the shores of Mim Beach near his waterfront shack. Suffering from amnesia, and quickly labelled Mim in lieu of an actual name, this dreamy, innocent young woman (wonderfully played by exciting newcomer Allira Jaques) has an instant effect on the residents of Roy's small coastal town, particularly dating app developer Harrison (heartthrob Mitchell Hope from Disney's Descendants). Very soon, love – in all its many and varied forms, be it straight, queer, platonic and everything in between – is well and truly in the air.

Filled with fresh, funny and heart-warming performances (vets Chris Haywood and Barbara Hastings also appear, along with scene stealing comic Steph Tisdale, newcomers John Harding, Anthony King, Georgina Rodgers and Trudi Ross, and a legendary Aussie pop superstar in a very special cameo appearance) and an unbeatable feel-good ending that will have you tapping your toes in delight, Love You Like That is pure joy in cinematic form. It's exactly what we all need and deserve this Valentine's Day.

"Love You Like That is so good for this time," says the film's star Allira Jaques. "It's just going to be a nice thing for people to watch so they can get away from everything. It's just such a nice feel good film."

Love You Like That is released digitally on February 9, 2022.