Lost Picnic couldn't have come at a better time: as spring arrives and our bodies begin to thaw from the winter social hiatus, we are more than ready for the festival season! Lost Picnic is an outdoor music, entertainment and food experience laid out across the pristine laws of 'The Nursery' at Flemington Racecourse, Melbourne. The day has been running in Sydney for a few years now, however this was the first earth-sun cycle that Melbourne got in on the Lost Picnic action. The atmosphere was relaxed and playful with live music, roaming performance artists, food truck favourites and picnic rugs covering the grass in every direction.

In recent years, the festival has occasioned the likes of RUFUS and Fat Freddy's Drop - so it's no wonder that once again, we had an exciting line up on the card. This year we saw home grown and handpicked Australian and New Zealand talent take the stage, including: Hot Potato Band, Odette, Big Words, Marlon Williams, Meg Mac and Tash Sultana. 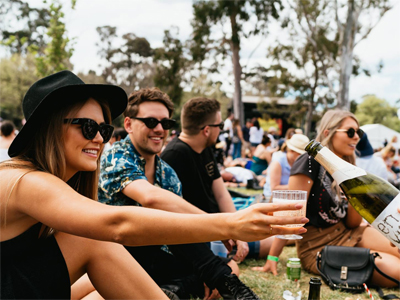 The day kicked off with Hot Potato Band – a 10 piece brass ensemble who got the crowds hearts pumping and feet taping. This was followed by a soulful affair with Odette and then a dance with the groovy and rhythmic quintet, Big Words. Next up was the bluegrass singer-songwriter, Marlon Williams, who turned the vibe deep and dreamy. Then Meg Mac step out onstage, with a fervent performance which moved the audience to their feet. Meg's soulful voice drew the crowd in and her delightful presence had the audience standing starry-eyed to the stage. Headlining on the day was the unique and blazing stylings of Tash Sultana. Lost Picnic was Tash's first appearance in Australia since the release of the most recent album, Flow State. With four ARIA awards and millions of fans worldwide, Tash sure knew how to stun a crowd. The performance had so much instrumental intricacy and impact, it was astounding. As the sunset over the Melbourne City skyline, the crowd was in awe as Tash weaved a musical masterpiece right in front of our eyes.

Also on offer at Lost Picnic was scrumptious repast from Pho Nom, Burn City Smokers and more. Fun for the kids was found in 'The Circus Playground', which had games, magicians and more to keep the young ones entertained. Roaming carnival-like, theatrical performances from Living Statues and Stranger Fruit also caught the eye. The performance from Strange Fruit had the duo twirling through the air using flexible sway-poles 5m high – it really was quite the spectacle!

All in all it was a day well spent, with bohemian beats and bountiful entertainment, we were happy to have found ourselves this year at Lost Picnic.
- Madeleine Coleman