Lavrence, From The Queer Fringes Of Sydney, Has Arrived

Posing the question - why exist quietly when your true self is just waiting to shine? The singer-songwriter is ecstatic to share the universe that he has lovingly created.

Growing up in a music obsessed household, Lavrence's taste for performance was quickly established as he'd race home from school each day to perform to Spice by the Spice Girls (dressing up as either ginger or posh). He later honed these skills at a performing arts high school where he studied singing, dancing and acting.

Accept Lavrence and come out of the dark – even if it's just for three minutes. After that...it's up to you.

Question: Can you tell us about Radio Man?

Lavrence: Radio man is a song about celebrating yourself and choosing your identity.


Question: What's the main message you hope your music spreads?

Lavrence: My main message is always about liberating yourself from shame, guilt and fear. I'm also extremely interested in the idea of identity and what that means to a person.

Lavrence: I feel connected to my spirituality when I make art, so I'd say that's the driving force behind my music.

Lavrence: I get two completely different things from both. I get to cultivate my intent and identity in the studio and fully experience that when performing live.

Lavrence: At the moment, Radio Man. I find people connect with the hope and strength within the song and that always makes for an intimate experience.

Lavrence: Anyone who is open to the message and needs to hear it. 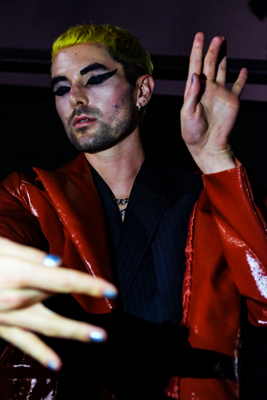 Lavrence: I'm obsessed with Banks new album 'III' at the moment, such a perfect mix of softness and aggression.

Lavrence: I had an uncontrollable need to perform ever since I was a child. I used to annoy everyone in my family because I couldn't stop singing and dancing around the house; that and the Spice Girls, of course!

Lavrence: I believe the biggest challenge is always yourself. I've had to learn to take care of my physical and mental health to be in a good enough place to do what I do.

Lavrence: I don't think I've quite grasped the idea of a typical day!

Lavrence: The freedom it gives me to create my own identity. Also, connecting with people through your art is an insanely special experience.