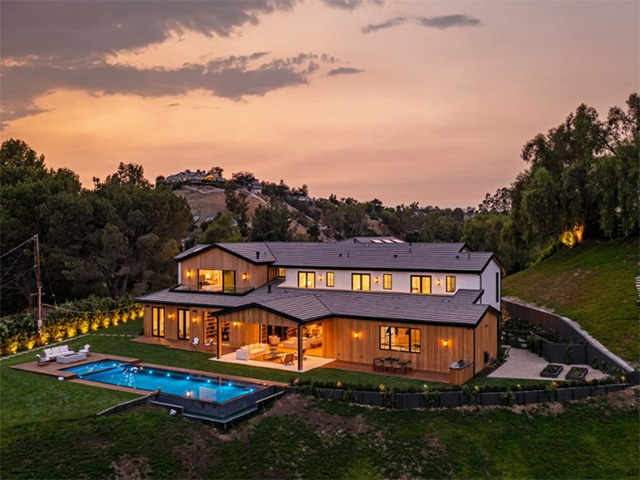 After splitting from the popular British boy band, Take That, Robbie Williams has become one of the all-time, best-selling British singer-songwriters, selling over 75 million records worldwide. As most of the mega-wealthy have been doing, Williams and his American-actress wife, Ayda Field, have been sinking their fortune of approximately $300 million into some of the most glamorous real estate on the planet. The Faring Estate, their most recent purchase, was the former home of Fannie Brice, the original Funny Girl. Totally updated, and at one time listed as high as $70 million, Williams purchased the Holmby Hills home for $49.5 million.

Sean McVay is as much a superstar as the team he coached through this year's Super Bowl win. Soon after the win, Sean rewarded himself with the purchase of a brand new contemporary home designed by Jae Omar in collaboration with architect Eran Gispan. Located behind the guarded gates of celebrity-laden Hidden Hills in Los Angeles, Sean paid a bit over $14 million for the home.

Since the dawn of cinema, LA has been the epicenter of the motion picture and television industry, drawing dreamers and artists from all over the country and the world. The movie stars and moguls of the Roaring Twenties wanted to live their Hollywood fantasy in style, leading to a boom in picturesque, idealized revival architecture. A delightful example is the Storybook Style homes dotted throughout the city. The style is a whimsical homage to Medieval European architecture, featuring elements such as turrets, crooked roofs, bridges over brooks, uneven doors and windows, and an overall fairytale cottage aesthetic. A spectacular example of the genre, the 1926 mansion known as Chateau Lemoine, has been listed for sale at $5.99 million.