Jane Bunn is a highly credentialed meteorologist with an infectious enthusiasm for the weather. As Channel 7 Melbourne's resident weather forecaster and presenter, Jane is featured on the 6pm and 4pm News, as well as national bulletins and special events. She is also the dedicated weather forecaster and presenter on 3AW Breakfast with Ross and John.

This year Jane further emphasises her versatility, as one of the hosts of The Great Weekend, Channel 7's newest lifestyle and leisure show.

The crowning glory of 2019 for Jane is her appointment as a Moomba Monarch, a huge honour and a dream come true.

With a Bachelor of Science degree from Monash University (majoring in Atmospheric Science and Mathematics), Jane was one of nine students from around Australia selected in 2006 to undertake a Graduate Diploma of Meteorology provided by the Bureau of Meteorology. As part of her studies she also spent a semester at Pennsylvania State University, one of the leading meteorology schools in the US.

After graduation, Jane was appointed as a forecaster with the BOM – posted initially to the Sydney office and later to Canberra as well as the RAAF's Williamtown Base.

In 2008 Jane joined The Weather Channel as the morning meteorologist, before moving on to WIN News to explain the highs and lows of regional Victoria's weather, where she gained huge popularity.

As a weather consultant, Jane also provides advice to farming communities throughout Victoria, as well as the Country Fire Authority, the Department of Environment and Primary Industries and a large number of organisations in the agricultural sector.

Before working at Channel 7, Jane presented the weather report for ABC News 24 and the ABC's primary 7pm news bulletin in Melbourne. Jane also has a Graduate Certificate in Journalism from Charles Sturt University.

As a passionate lover of animals, Jane is honoured to be an RSPCA ambassador. She is also a supporter and patron of the Royal Flying Doctor Service.

With a successful career and armed with a range of bespoke qualifications; Jane Bunn is also a great Ambassador for Women in STEM, advocating for young Australian women to seek and pursue their dream careers in Science, Technology, Engineering and Mathematics.

More information on the Moomba Festival 2019 program can be found at www.melbourne.vic.gov.au/Moomba

Question: Congratulations on being crowned Moomba Monarch, what does this mean to you?

Jane Bunn: I'm thrilled to be crowned Moomba Monarch, I always watched the parade as a kid, then interviewed people on the parade route in the TV coverage – and now I get to sit on a throne on a float, I think it will be amazing!


Question: What are you looking forward to the most at Moomba this year?

Jane Bunn: Moomba is such a great time of year, and possibly when our weather is the nicest! So, it's great to have everyone come out and feel the atmosphere of the festival. Watching the Birdman Rally is always a highlight, as well as hearing the shrieks from those on the rides.


Question: Can you tell us about your involvement in advocacy for women in STEM?

Jane Bunn: STEM is such an important field of study, because it drives so much of what we do in this world – and to get women more involved is critical. When I first entered a university class in software engineering back in 1998, I was one of only five women in 200 students! Ten years later when I worked at the Weather Bureau, there was only one forecasting shift in a six week block that was all women. We're slowly heading in the right direction, and I like to encourage anyone who has an interest in changing the world through tech, to go for it.


Question: What do you hope to achieve as an Ambassador for Women in STEM?

Jane Bunn: I visited a group of girls at school recently who have designed an entry in the Birdman Rally for Moomba. I had a chat with them about their interests in studying any of the sciences, tech, engineering and maths and it was great to watch their faces as they listened to my story. I was hoping that through sharing my experiences, I was influencing the choices they were yet to make in their lives. Affecting a change in others which may lead to them using their skills to change the world would be a great achievement. 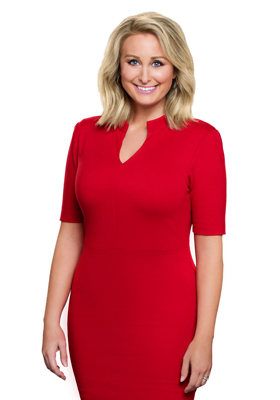 Question: How does it feel to be such an empowering inspiration for Australian women?

Jane Bunn: Chatting with my mum recently, we discussed what it was like during her uni days, during my uni days and what we think it will be like for her granddaughters' uni days. We're seeing women change from a hidden position of power to a front and centre position and it's wonderful to witness. If I'm playing a part in that process in some small way then that is an honour.


Question: What's the one piece of advice you'd give a teenage girl?

Jane Bunn: Follow your dreams and do whatever makes sense for you. I didn't know what I wanted to be at the end of school so I tried a few things before I realised that I could turn my love of weather into a career. But I'd repeat everything, the long and winding road that got me to this point now - even the bad bits - because all those experiences have made me who I am. If you don't know the answers now, work at it and have patience, the answers will eventually turn up!


Question: How can parents encourage their teenagers to pursue their dream careers in Science, Technology, Engineering and Mathematics fields?

Jane Bunn: If your daughters show an interest, anything you can do will help. I think even just the simple act of my mum taking her youngest granddaughter to the library each week is going to have an influence later on. She will have read so much more, in many different fields, with that wider knowledge helping her decide what she wants to become. Simple acts can have big results.


Question: Can you tell us about The Great Weekend?

Jane Bunn: The Great Weekend is such a fun show to make and lets me experience so many entertaining and interesting places in Melbourne. And it's nice that I get to show a bit more of who I am, what I'm really like. Whether that's having a laugh trying beach volleyball (I've never been very good at sport!) or cooking food from a range of places (and the best bit, tasting it!), it's a life experience that I'm thoroughly enjoying.


Question: What does a typical day look like for you?

Jane Bunn: It mostly revolves around the weather! At 6:30am I start analysing all the weather data from overnight, then I give a forecast on 3aw radio at 7am and 8am.

The morning is spent weather watching and squeezing in some exercise and lunch then I'm in the makeup chair at Channel 7 in the early afternoon. That takes an hour! But it's a nice time when I can chat with these artists with very different educational backgrounds to me about all sorts of things.

I then prepare all the graphics and scripts based on my forecast from the latest weather data and present that during the 4pm and 6pm news.

That all winds up around 7:15pm and I head home ready to start all over again in the morning.
I love it!