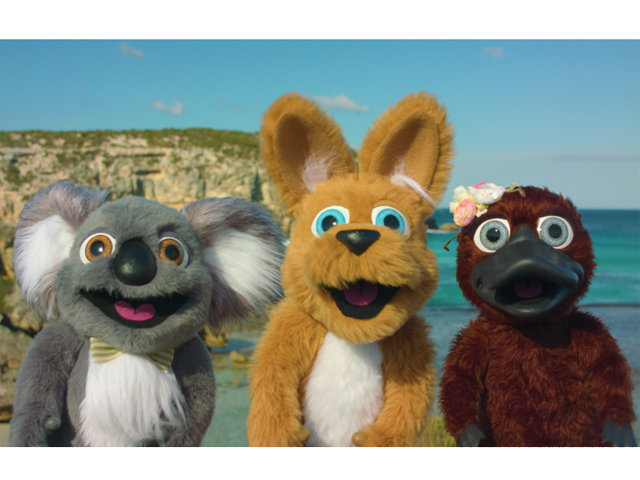 Hip Hop Kangaroo & Friends is the debut app from Lupa Entertainment, and it looks destined to introduce children all over the world to Australia's natural beauty and animal life.

Lupa Entertainment's founders, Luke Tregloan and Paul Rowse, are excited about introducing their hip hop-loving kangaroo creation and his friends to the world - get ready to make friends and sing along with Hip Hop Kangaroo, Kula Koala and the adorable Poppy Platypus!

Luke, the creative force behind the project, explains, "We're thrilled to be able to provide a unique new offering in the children's app market. We've created three fantastic animal puppet characters that sing fun and educational songs, and kids will get to see them interacting with real animals and objects in the spectacular Australian landscape."

Making the most of digital technology, kids can also put themselves in the frame with their new favourite friends. "We wanted kids to really connect with music and learning, and the app provides plenty of opportunities to actively engage with the characters," Luke describes.

The app's video material was filmed to showcase the natural beauty Australia has on offer. International audiences and local children alike will marvel at the stunning landscapes and animals that Hip Hop Kangaroo and his friends explore and interact with throughout the app.

Central to the app are the educational songs, which Luke co-wrote with his father, Brenton Tregloan, a qualified and experienced teacher. "Our songs cover a wide range of concepts, from counting to colours to opposites, plus each of the characters has their own fresh take on a new alphabet song that, importantly, pronounces the letter Z correctly for Australian and international English audiences. We also have a "Zee" version, specifically for our American users," Luke explains.

Recognising Australia's multicultural society, as well as the international market, Luke and Paul wanted the app to be accessible, not only as an educational tool, but something that could assist in the learning of English. The app has therefore been professionally translated into 10 other languages, including Mandarin, Spanish, Hindi, Portuguese, Russian, Japanese, Indonesian, Korean, French and German.

"Right from the beginning, Paul and I wanted to create something that had a music and language focus, but also something that was safe for kids, so there are no ads, no subscriptions and no personal information is required to use the app," Luke says.

"Luke and I have a joint vision to provide education with happiness, and judging from the reaction we've received so far from children using the app, I think we've succeeded!" Paul enthuses.

Lupa Entertainment has also released their songs digitally and are now receiving regular airplay on ABC KIDS listen and Kinderling kids radio. Plus, they have self-published a range of children's books to accompany the app.

More information can be found at www.hiphopkangaroo.com