Melbourne's own roots/rock aficionado Hamish Anderson is gearing up for a massive 2019, with the release of his latest single Breaking Down, a gritty, threatening rock track that must be listened to with the volume knob fully cranked, out now. Breaking Down is an early taste of the upcoming album from Hamish, entitled Out Of My Head; an eclectic and exciting collection of songs from this young artist who has already blown the world away with his talent, out May 2019. Hamish will play his first Australian shows since 2017 alongside the one and only Gary Clark Jr. as main support, kicking off in Sydney at the Enmore Theatre on April 18, then moving through Canberra, Melbourne, Adelaide, and wrapping up at the Perth Concert Hall on April 27.

On Breaking Down, it's pretty easy to see why Total Guitar named Hamish Anderson one of their Top 10 Best New Guitarists in 2018 – like a bull at a gate, chugging guitars provide an irresistibly catchy bed for some ripper riffs the track progresses. This track is overflowing with pent-up frustration and undeniable passion, and it's a mouth-watering concoction for some killer classic Americana-rock, as Hamish explains, "Breaking Down definitely explores the more rock and roll side of my music. I was sitting around one day playing guitar and suddenly just started playing the riff, all the lyrics came basically at once so it was written very quickly. I'd had an argument earlier that week with someone I know so I think some of that definitely crept into its inspiration. I just wanted to turn the volume all the way up and get out everything that was on my mind."

While Breaking Down is a superb example of rollicking rock, it is just one of many genres that Hamish dips his toes into on the new album Out Of My Head. Americana, soul, pop, roots, blues, rock; that's a lot of ground to cover, but Hamish does it with a natural ease that's far beyond his years. The mellow (What You Do To Me, Damaged Goods) and the upbeat (No Good, You Give Me Something) tracks on this record sit comfortably next to each other; all buoyed by a knack for clever, hook-driven songwriting and a clear, burning passion that drives the music from the first strum to the last. Hamish enthuses, "I really wanted to take my time and write as many songs as I could for this album. I wasn't writing to a specific genre or sound, rather I let the songs reveal what they wanted to be… The album explore themes of alienation and defiance, mixed with unabashed love songs and even observations on what's happening in the world around us. Certain songs had themes that I hadn't explored in my writing previously. I feel I really went a lot deeper in the writing of these songs then I had ever done before. Most are universal feelings that I feel people can relate to. Once again, I got very lucky to work with a really great, talented group of people on Out Of My Head including producer Jim Scott (Tom Petty, Tedeschi Trucks, Wilco) who I had worked with on my debut album Trouble. Jim is an incredible producer/engineer and we work in a very similar way -- it's always an amazing experience working with him."

Anyone who presses play on Breaking Down will no doubt understand that this is the kind of music that is made to be played live to a pulsing, enthusiastic crowd. Hamish is thrilled to be hitting the road with the legendary Gary Clark Jr., as he gives fans a taste of what to expect, "I've been working so much in the US for the past four years that to be coming home to play - and especially these particular shows supporting Gary Clark Jr (who i'm a massive fan of) -- is truly huge for me. Regarding the live shows, people can expect a mixture of blues, rock and roll and soul. I'm playing as a trio at the moment so it allows us to get down to the meat and potatoes of the songs, rock and roll with no frills. I've played so many different type of gigs over the past four years that as a performer I think I've become more confident, focused and I'm just having a lot of fun with it." 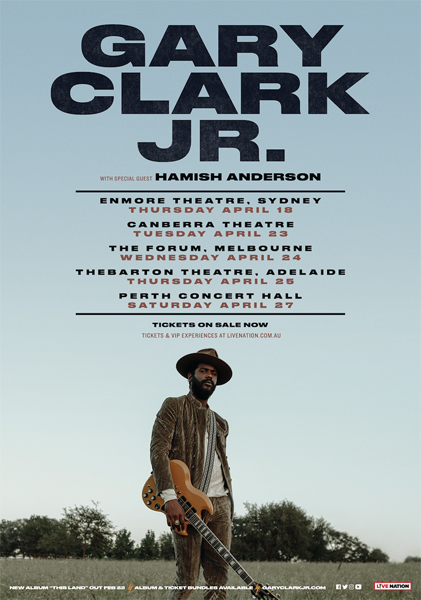 Hamish Anderson: I would describe my music as a mixture of blues, rock & roll and soul music.


Question: What inspired Breaking Down?

Hamish Anderson: Hard to say; honestly, it was written very quickly. The riff just came out of nowhere when I was playing guitar and I started writing down the lyrics almost all at once. It was definitely a song that allowed me to blow off some steam and get out some pent up anger.


Question: Can you tell us about the upcoming album?

Hamish Anderson: It's called "Out Of My Head" and it's coming out on May 3rd. I'm really excited to release these songs as they were recorded over a year ago. I'm incredibly proud of the album - it's very diverse - ranging everywhere from bluesy rock, to soul, pop, and Americana/folk. I wanted to make a very song oriented album which meant that the songwriting was at the forefront of everything. It's a really honest representation of me and my music and I feel like I'm coming into my own as an artist.

Hamish Anderson: "Breaking Down" has been a really fun one to play live. It's just such a burst of pure energy that it always feels like it gets a great reaction live. I like that it's just straight ahead energetic rock and roll with no frills. Down and dirty!

Hamish Anderson: I'm stoked to be playing at home in Australia after so long. I've been based in the US for the past couple of years, playing a lot of shows and festivals over there, Canada and Europe so I've really put in the hard work playing heaps of different types of shows. I'm playing in a trio set up at the moment (guitar, bass and drums) so it gets down to the meat and potatoes of the songs. I'm so excited to be supporting Gary Clark Jr and I think it's going to be a great show for any fans of blues, rock and roll and roots music.

Hamish Anderson: Hmmm… first thing that comes to mind is any member of The Rolling Stones. The Stones are my favourite band so to have someone like Keith Richards or Mick Jagger at a show would be mind blowing for me.

Hamish Anderson: I love them both. They're both very different experiences and I get different things from them. Live, it's very hit and go, you really don't have any control over what will happen and you have to just roll with the punches and read the crowd. In the studio, you can take a little more time and care in getting things the way you want them. They both explore different things creatively that I love.

Hamish Anderson: I just get really excited when I feel that I've written a good song. It's hard to describe, but it's definitely one of the biggest highs I've experienced writing a song that you really think is quite good and says something you want to stand behind.

Hamish Anderson: The Beatles were the inspiration behind me wanting to play guitar, write songs and sing. I heard The White Album when I was 12 and that immediately made me want to play guitar.

Hamish Anderson: I would love to do something with Lana Del Rey. I really love her style and I think she would sound great on a bluesy/rock duet.

Hamish Anderson: Being an indie artist there's a lot of challenges finding your way in the music world. I think a really important thing is staying true to who you want to be and what type of music you want to make. When it comes to music everyone is very quick to give you their opinion on what you should sound like (or look like etc) but I think the key is to stay true to your own vision and be who you are.

Hamish Anderson: It's always different. Sometimes it's being somewhere different everyday playing shows, others it's working through the logistic side of planning for tours, album releases etc. I write at least a few lines every day, good or bad just as long as I'm putting the effort in.