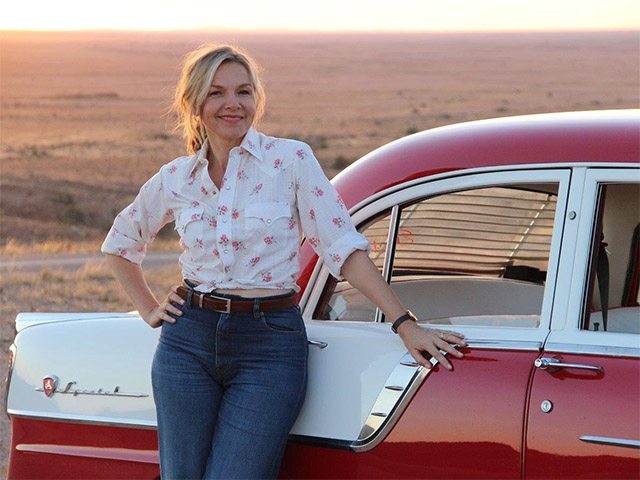 Self-confessed "city girl" Justine Clarke is about to take a road trip into the heart of Australian country music. Premiering on ABC TV and ABC iview on 2 November, Going Country is a two part series which sees Justine travel to locations that have played an integral part in the creation and inspiration of iconic country music songs, as well as the lives of the artists who have helped shape Australian country.

Going Country is a joyous and heartfelt series helmed by award-winning director Kriv Stenders (Slim and I, The Go-Betweens: Right Here), featuring musical performances by Paul Kelly, Kasey Chambers, Briggs, Troy Cassar-Daley and Fanny Lumsden, amongst many others.

Crossing the inner city/ country divide, Justine begins a road trip adventure that reveals our country music story, as she connects with some of our greatest musicians performing some of Australia's iconic songs.

Justine learns that country was in some ways the punk of its time, how it cut through with its striking clothes, untamed singing style and its own unique culture. But more than that, she will discover just how important country music was to Australians – and still is – and how these songs capture who we are as a people and a nation.

"There's a personal side of this story. My family is musical. My mum was a dancer, my dad was a singer. They met performing. I've been singing for as long as I can remember. And I love all kinds of music. I even sang American country in my first band, but Australian country... it feels like uncharted territory," says Justine Clarke.

With a particular focus on female country talent, Going Country forms part of the ABC Arts Know My Name project. Started by the National Gallery of Australia to address gender bias in visual arts, the next chapter of Know My Name has been broadened by ABC Arts to include women from a diverse range of creative practices to be featured in vibrant original content across the ABC.