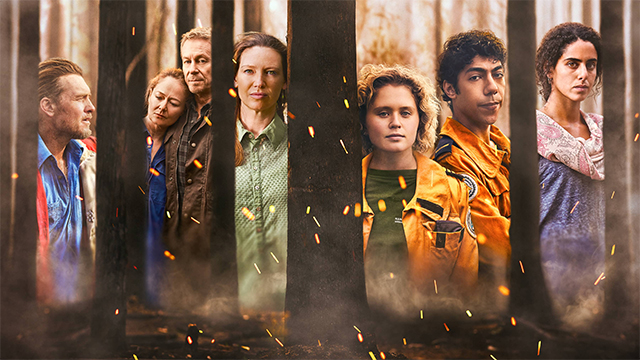 From the ashes comes the landmark drama series

FIRES on ABC in September

The ABC is proud to announce the must-see, epic six-part anthology series FIRES will premiere on Sunday, 26 September, 8.40p.m on ABC TV and ABC iview.

Inspired by true events, FIRES is a serialised anthology about the experiences of everyday people at the front line of the devastating fires of the 2019-2020 Australian summer.

Filmed in Melbourne and regional Victoria earlier this year, the series honours the experiences of the many people affected by these fires. It acknowledges the losses suffered and the ways people came together in the face of a devastating natural disaster.

Beneath the unfathomable scale of the fires and behind the images and the headlines were thousands of stories of people directly affected by the fires. Stories of heartbreak and loss, heroism, humanity, and community.

The series begins in Queensland in September 2019, at the start of the fire season, and continues as the fires make their deadly march south, burning out of control through NSW and Victoria until February 2020.  Each episode is set in a different location as the fires spread and build to a terrifying onslaught across the country through Christmas and New Year.

As the fires grow in intensity and ferocity and threaten different communities, new characters appear, whose stories reflect the breadth of experience during Australia's black summer. Through the episodes we meet volunteer firefighters, families who have lost homes, livelihoods and loved ones, people who have to make agonising decisions about whether to stay or flee; those escaping homes and once idyllic holiday destinations; and others who find themselves responsible for the lives of friends and strangers.

Production credits: The series is produced by Tony Ayres Productions (TAP), which is backed by NBCUniversal International Studios and Matchbox Pictures, for the ABC. Major production investment from Screen Australia in association with ABC, with support from Film Victoria through the Victorian Screen Incentive and Regional Location Assistance Fund. Distribution is handled by NBCUniversal Global Distribution. ABC Executive Producers: Sally Riley and Brett Sleigh.