A new poll has revealed that 77 per cent of Australian women feel tired, sleepy or exhausted each day, fuelling concerns they could unknowingly be living with sleep apnea, putting themselves at risk of developing chronic health conditions such as type 2 diabetes, depression and cardiovascular disease.

While commonly thought to be a man's disease, women with sleep apnea tend to experience worse health status than men, use more psychoactive drugs as well as sedatives to sleep, and have higher healthcare costs. Women with sleep apnea are also at increased risk of long-term, serious health conditions that can reduce their quality of life, such as cardiovascular disease, despite sleep therapy solutions potentially reducing the risk of cardiovascular.

Even though one in two women aged 20-70 years are thought to be living with the condition, evidence suggests women are often under diagnosed, or diagnosed with other conditions, such as depression, despite complaining to their doctor of a lack of energy, constant tiredness and morning headaches.

In fact, a recent online poll of 1000 Australians found that women were more likely to go to a doctor about their sleep than men (24 per cent versus 20 per cent), however they were less likely to then be referred to a sleep study (8 per cent versus 15 per cent).

'There appears to be two issues at play when it comes to women being accurately diagnosed with sleep apnea," said Professor David Hillman, Chair, Sleep Health Foundation and Director of the West Australian Sleep Disorders Research Institute, Perth.

'Firstly, when women speak to their doctor they often don't mention that they snore which is a key indicator for sleep apnea. Rather, they complain of less classic symptoms such as depression or restless legs that don't trigger suspicions of sleep apnea for doctors."

'Furthermore, evidence also suggests women may consider snoring 'unladylike" and therefore not mention it to their doctor while also being more likely to attend medical appointments on their own, and so information from a partner on snoring, which may assist in a diagnosis, is not be as readily available as it is for men," explains Professor Hillman.

The survey found that three in 10 women (28 per cent) reported they had been told by their partner that they snore but they either didn't believe them or felt embarrassed so did nothing.

The release of the findings of the poll coincides with the availability of the first sleep therapy solution - The Airsense™ 10 AutoSet for Her therapy device - which is tailored to the unique needs of women with sleep apnea, such as the way they breathe compared to men.

The device, manufactured by ResMed, uses the first-ever dedicated algorithm tailored to respond to female-specific characteristics of sleep apnea. Typically, women with sleep apnea take longer to fall asleep, have more flow limitations (reduction in volume of air going into the lungs), and more frequent sleep arousals than men, and The Airsense™ 10 AutoSet for Her therapy device accounts for this.

"With women representing nearly 40 per cent of all newly diagnosed sleep apnea patients, it's important that there are options that consider their unique needs," said Professor Hillman.

'But it is equally important that Australian women - and their doctors - recognise that feeling sleepy or exhausted during the day, regularly waking up with a headache or constantly having difficulty falling asleep should not be ignored, but investigated further, as they could be signs of significant sleep health issues such as sleep apnea."

'For those women living with sleep apnea, being able to access therapeutic options that help manage the condition could improve quality of life and overall sense of wellbeing for those affected," said Professor Hillman.

For more information about sleep apnea in women visit www.sleepvantage.com.au/forwomen

A summary of the key findings of the poll 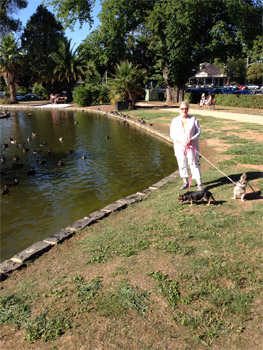 Question: When were you diagnosed with obstructive sleep apnoea?

Fiona Bond: I was first diagnosed in February 2012.


Question: Prior to this, how did you feel every day?

Fiona Bond: I wanted to go back to bed 10 minutes after I got up in the morning and from then on I dragged myself through the day battling fatigue. I felt that I had not had enough rest when I woke up and had no energy or motivation to do anything. I ate lots of sweet and stodgy food to give me energy and put on a lot of weight. My concentration was poor and so my memory was really terrible. I stopped being social as I just went to bed all the time.


Question: How did this affect your daily schedule?

Fiona Bond: I used to walk my dogs every morning before work and this stopped as I wanted to stay in bed as long as possible. I had a hard time staying awake at work at certain times throughout the day. I loved cooking and always cooked good food and now I was too tired when I got home so cooked quick stodgy food, and then went to bed early.


Question: When did you first realise you had a sleep issue?

Fiona Bond: I went overseas in September 2011 and went on a pilgrimage through Southern Italy and had to sleep in a barn with 13 other people; by 4am the barn was empty except for myself and my partner. When we asked them in the morning why they were all sleeping outside they said that I was snoring so loud they couldn't sleep.


Question: How long had you been a snorer, for?

Fiona Bond: Probably for a year or so before that


Question: When was the point you knew you had to see a specialist?

Fiona Bond: I realised my lack of sleep and snoring was affecting my overseas holiday as I did not have the energy to do everything that I wanted.


Question: How were you diagnosed with sleep apnea?

Fiona Bond: I first went to my GP who referred me to a specialist at Peninsula Sleep Centre and he sent me to their sleep clinic to do an overnight sleep study and it showed I had apneas every two minutes throughout the night.


Question: Can you talk about your treatment, CPAP?

Fiona Bond: My specialist recommended a CPAP machine for me. I was so happy that there was something to give me some relief and after only a week I noticed a huge difference on how it felt waking up and staying awake all day long.


Question: How has CPAP changed your sleep and life?

Fiona Bond: After a year on a CPAP machine I did another sleep study and it showed I was sleeping like a twenty year old. My life got back on track and I felt so good. I do not even think about sleeping in the day now. I go to sleep and don't wake up until the morning and feel refreshed.


Question: What advice do you have for others who have sleeping issues?

Fiona Bond: Go to see your GP as soon as possible and seek a referral to a sleep centre. Get a CPAP machine as this will change your life. Having sleep apnea can destroy your quality of life significantly. I can't believe my quality of life has improved so much since using my CPAP machine.