A new family history series
from the Logie-award winning team behind Dynasties. 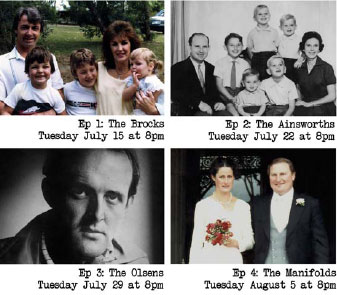 Family Fortunes is a four-part half-hour series that explores how dramatic reversals in fortune - for better or worse - have affected Australia's most interesting families.

Here is a rare opportunity for viewers to enter the private homes of some of the country's most influentialfamilies, as they reveal for the first time on television the intimate details of their history. In this new series,family members candidly discuss the unexpected incidents that have dramatically affected them - affairs,illness, car accidents, death and unjust wills - and the profound repercussions of these events. As eachfamily member discusses these changes, they share their differing perspectives often with great emotion.

Our first four episodes profile a range of families from across the country, with diverse backgrounds, interests and issues. The series includes the untold story of racing legend Peter Brock's family; the extraordinary tale of pokie king Len Ainsworth and his family; the poignant story of the once-great Manifolds of Victorian squattocracy; and the fascinating behind-the-scenes family tale of Australia's own Picasso, John Olsen.

Each film traces the enormous changes of fortune experienced by each family as they play their part inAustralian history, exploring the deep personal dramas behind these events. Through their generouslysharedexperiences, we discover that every great change, reward or endeavour inevitably comes at a cost.

The series continues the family theme as the Dynasties team is joined by two exciting young televisiontalents. Narrator Edwina Throsby is the daughter of acclaimed broadcaster Robin Hughes and niece of the much-loved ABC presenter, Margaret Throsby. Music for theseries is by award-winning composer Guy Gross, son of renowned film-maker Yoram Gross. 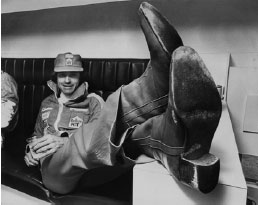 Directed by Tracey Spring
Tuesday July 15, 2008 at 8pm ABC1
The inside story of the family behind 'Peter Perfect' Motor racing legend, Peter Brock.

Peter Brock, the legendary motorracing superstar was knownthroughout Australia as 'PeterPerfect'. For most of his life, hereigned at Bathurst as 'King of theMountain', supported by his loyalpartner, Bev, and their three children. The family were Australia's racing carroyalty.

When Peter met Bev, he was a rising star of the track, but his unhealthy lifestylethreatened to slow him down. It was Bev who encouraged the young championto change his diet and lifestyle. With her help, Peter went on to win an amazingtotal of nine Bathurst races and nine Sandowns.

Theirs was a formidable partnership and, although they never married, theycreated a close-knit family unit, complete with three children. Family liferevolved around Peter's racing career. Peter won races, endorsed brands andmade public appearances while Bev took care of the details at work and home.Their children grew up on the Brock farm, 200 acres of glorious countryside anhour out of Melbourne, where Bev and Peter built their dream home.

Like their father, Peter's children got used to being in the public spotlight. Theywere rarely at home alone - as media and others were often invited in. Thefamily also learnt to live with the man behind the public image of 'Peter Perfect'.They saw first hand the pressures of fame. For Bev, there was the open secret ofPeter's affairs with other women. Even now, she insists it never affected theirfamily life.

When Peter Brock finally retired from the track, his adoring fans weredevastated. His retirement also marked the beginning of a dramatic change inhis family's fortunes. In 2005, just a few months after his sixtieth birthday, Petersuddenly walked out on Bev and the children and started a new life with a newwoman, Julie Bamford. She had been a close friend of Bev's, from aneighbouring farm.

Bev and the children were now on the outer and, like everyone else, reliant onthe media for the details of Peter's life. They didn't even have his phone number.What Peter did next shocked the whole family. He sold their prized possession -the Brock farm.

Only a few months later, tragedy struck. Peter was driving in a rally race inWestern Australia and lost control of the car. He crashed into a tree and waskilled instantly. Shattered, Julie Bamford gave a press conference, as Bev and thechildren tried to cope with the news as it came in over the radio and television.Now, for the first time, director Tracey Spring goes behind the scenes and joinsthe Brock family as they face Peter's devastating legacy. 'Peter Perfect' leftbehind a mess. There were three unfinished wills, all unsigned or incomplete. Asa result, Bev, the children and Julie are now battling it out for their share of theBrock estate in a legal marathon that is slowly draining away what little is left ofthe family fortune. Here is an extraordinarily candid - and sobering - reflectionof what can befall any family. But it's also a powerful testament to the strengthof the Brock family and its determination to look to the future, howeveruncertain it may be.

Andrew Barnes has worked as an editor on most of the ABC's long-standing factualprogrammes, including Compass, Catalyst, Message Stick, Rewind and Dynasties - forwhom he cut another motor-racing family history, The Jones Family. However, this isthe closest he had come to working track-side before editing The Brocks.Wendy Boynton went to boarding school and university in Adelaide, where herinterest in family history was piqued by often being favourably mistaken for aBonython. Afterwards, she wrote arts reviews and feature articles for newspapersand magazines. For the ABC, Wendy has researched and produced Outback House;Kylie Kwong- Heart and Soul; Sunday Arts, as well as Dynasties.

Laurie Critchley was the originator and series producer of the Logie award-winningDynasties series, as well as the director of many of its episodes, including The AnsettFamily. While there is clearly a limit to the number of dynasties in Australia, shebelieves there is an almost limitless wealth of family history to explore. Sheconceived of Family Fortunes in response to popular demand for more suchprogrammes on the ABC and is its series producer, while also making The Olsens.Guy Gross is one of Australia's leading film and television composers. His father isthe celebrated animation film-maker, Yoram Gross, but Guy has followed his ownpath to success. From his British Academy Award (BAFTA) nominated score to theinternational hit, The Adventures of Priscilla, Queen of the Desert to the US hit SCI-FIseries Farscape, his film scores cover a huge variety of styles. His many awardsinclude Best Music for a Documentary, Children's Series, Short film, Animation,Promotional Video, Advertisement, TV Theme and twice for Best Music for a TVSeries.

Geraldine McKenna has spent much of the last seven years at ABC Televisionworking on the award-winning Dynasties series. Her many family histories include theartistic bohemian Mora family; wine entrepreneurs, the McGuigans; and Australia'smost famous horse racing family, the Hayes. She became hooked on family historyafter a long involvement in television history, including on Barry Humphries'Flashbacks and the acclaimed series Australians at War.

Bruce Permezel has gone from the streets of Melbourne to the Victoriansquattocracy within the space of a year. Prior to directing The Manifolds, he directedthe hugely popular and Logie award-winning series, Choir of Hard Knocks. Despitethis stint in Victoria's western district, at heart he remains a city boy.

John Pleffer ASE is amongst the ABC's most respected film editors, whose long listof documentary credits includes (most recently) the series Operatunity, Peking toParis, University, King's School and of course, Dynasties. He has cut three episodes ofthis series of Family Fortunes: The Ainsworths, The Manifolds, and The Olsens.Tracey Spring had almost no interest in car racing before directing The Brocks -although even she had heard of 'Peter Perfect'. She began her television career atthe ABC building sets and making props, but has been producing documentaries forseveral years. Her programs for the ABC include Miss Olley; Land Mines - A Love Storywith Dennis O'Rourke, and The Farewell Party.

Simon Target has had his cultural horizons stretched from opera to pokie machinesin making The Ainsworths. He is one of Australia's most acclaimed film-makers,known for his television documentaries King's School, The Academy; and Flight forLife. Other TV work includes Surfing the Menu, two series with Kylie Kwong, andmost recently the documentary series that made opera popular: Operatunity Oz. Heclaims, like Len Ainsworth, not to play the pokies as a punter.

Edwina Throsby is a documentary film-maker and journalist whose manyprogrammes have appeared on the ABC and SBS. Although she has often voiced herown films, this is her first foray into narration - and an almost inevitableconsequence of being born in to a family of renowned broadcast voices, includingher mother, Robin Hughes, her aunt, Margaret Throsby and, of course, her cousin,Holly.