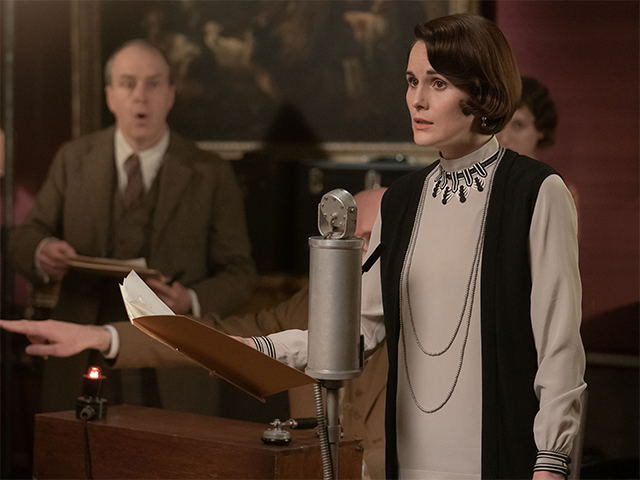 Michelle Dockery plays Lady Mary Crawley in Downton Abbey, for which she was nominated for a Golden Globe Award and three consecutive Primetime Emmy Awards for Outstanding Lead Actress in a Drama Series. She earned an Olivier Award nomination for Best Supporting Actress for her stage performance in Burnt by the Sun while her film credits include Hanna, Anna Karenina, Non-Stop and The Gentlemen. On television, Dockery has played lead roles on the drama series Good Behavior and the miniseries Godless (for which she received her fourth Emmy nomination), and has also starred in Defending Jacob and Anatomy of a Scandal. She continues her 12-year run Lady Mary Crawley, returning in the movie Downton Abbey: A New Era…

Downton Abbey: A New Era is now available on Digital, Blu-ray™ and DVD

It must have been important to maintain the right balance in the movie; there are so many moments of happiness and sadness?

Michelle Dockery: Finding that balance was really important because there is a moment with Lady Violet [Maggie Smith] where there won't be a dry eye in the house. So it was important for them to strike a balance. And I think the coda at the ending, where the ending is the start of the new era. There's that moment with Violet's portrait, which was a moment I think that [director] Simon Curtis was adamant about. You're not leaving the audience with a hopeful new beginning. And though the film is emotional in places it is also very funny. I think that it's funnier than the first one. There is a lot more humour and it feels such a rich tapestry.

Michelle Dockery: Oh, Jim Carter does that so well. Carson is the one that is reluctant to change, and any change or him being out of his comfort zone is very amusing.

You have one especially emotional scene with Violet. Was that difficult to shoot?

Michelle Dockery: Yes. Half the challenge with something like Downton is finding the right balance between your own emotions and your character's. Mary is very stoic; they come from that generation, and they are aristocracy, so they don't show much emotion. So during those scenes I had to hold back Michelle's tears! The challenge is suppressing your own emotions. You have to make sure that you don't seep through too much into the character.

How has Lady Mary changed across the years? She is starting to blossom in a new role at Downton despite her initial reluctance…

Michelle Dockery: When I look back at Season 1, we met her as this sort of arrogant and petulant, spoiled child, really, who refused to adhere to her duties and her potential in the household, and becoming the lady of the household. There is a line in there where she says she doesn't want to become to woman of the house, but now she is and she is really embracing that. I think she enjoys being at the helm, and the responsibilities that she has. Keeping Downton afloat has become her purpose and this film's premise is set up with the house in an ill state and needing some repair. Having this film director approach them about shooting a movie in the house is a great prospect for her. And by the look on her face, it is quite a healthy offer that they're making! So she has evolved so much and matured through the years, from being a sort of late-teenager to becoming a woman. She has softened. She was very hard in the beginning but life has softened her. That has always been an interesting balance with Mary " that she is very stoic and a very put-together person, very calm and collected " but then I've loved playing those scenes with Carson and Anna [Joanne Froggatt] where she breaks a little. She can show a bit more vulnerability with them, so she's been an incredible character to play.

Looking back, it must have been interesting to grow up and mature alongside Lady Mary " as an actress and as a person?

Michelle Dockery: Absolutely, we have grown up together. Laura Carmichael [Lady Edith] and I say that all the time to each other. We grew up with these characters and with this job, so we are like a family. It's so rare as an actor to get to go back to something so often. It is like a regular job.

Did you enjoy the fact that Mary has a mirrored storyline with Violet, involving the temptation of a new relationship?

Michelle Dockery: Yes, I could see that when reading the script that there was this parallel story from Violet's past and what is happening to Mary now, with the temptation of a man offering his advances. When I watched the film, those parallels become even clearer. And they have such a fantastic relationship; she is very much her grandmother's granddaughter. There are so many similarities between them and it is very much a case of the passing of the torch. For this film it was important to see Mary entering a new world within Downton, especially with a film crew coming into the house.

The film crew are almost symbolic of the new era…

Michelle Dockery: It feels like they are the new era coming into the house, otherwise we are quite isolated as a family and as a household. We invite people in – last time it was the King "but here you feel that there is no stopping it; the outside world is coming in. I feel Mary copes with it really well and is enjoying the change, and the challenge of operating within the chaos that is in the house.

It is the film at Downton that brings Mary and Jack Barber together; you must have enjoyed their flirtatious dance?

Michelle Dockery: Absolutely. Mary does enjoy this great friendship with Mr. Barber [Hugh Dancy] and enjoys becoming almost a producer on the film. She needs them to finish the movie so that Downton gets the money, which is why she steps in and does the voice for Myrna Dalgleish [Laura Haddock]. Within that Mary and Mr Barber do grow close. I think she enjoys the company of men and enjoys the sparring with men. Having her husband Henry being away " and there's a hint of unrest " she finds that frustrating. She loves him and she's devoted but there is this temptation and I love how the story runs alongside that history with Lady Violet and the man in France.

Did you learn much about the era of silent filmmaking?

Michelle Dockery: It is almost always like a history lesson when you are making Downton and learning about that was fantastic. I didn't know how quickly it changed from silence going into the Talkies and how brutal that was for so many actors, like Myrna. It was a great lesson and all loosely based on the real story of the film Blackmail [by Alfred Hitchcock, 1929].

And what would be one quick, treasured memory from shooting A New Era?

Downton Abbey: A New Era is now available on Digital, Blu-ray™ and DVD