Celine Sciamma Portrait Of A Lady On Fire Interview Synopsis: Winner of the Audience Award at MIFF 2019, Portrait Of A Lady On Fire is an intimate and deeply affecting drama about freedom, love and desire.

Marianne is a young painter in 18th-Century France, commissioned to do a wedding portrait of Héloïse without her knowing. Marianne disguises herself as her companion to get closer to her subject – observing by day and secretly painting at night. Intimacy and attraction grow between the two women as they share Héloïse's first and last moments of freedom. The portrait soon becomes a collaborative act and a testament to their love.

Portrait Of A Lady On Fire
Release Date: 26th December, 2019 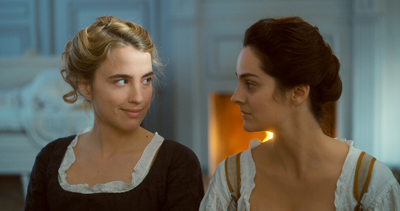 Question: Until now, you have tended to work on contemporary topics, a director of our times. Why this leap back with a film set in the 18th century?

Céline Sciamma: An issue may be an old one, but that does not mean it is not topical. Especially when it is such a poorly known story. That of women artists and even of women in general. When I immersed myself in the documentation, I knew very little about the reality of female artists of that time. I knew only about the stars who confirmed their existence: Elisabeth Vigée Le Brun, Artemisia Gentileschi or Angelica Kauffman. The difficulty in collecting information and archive material was unable to obscure the existence of a genuine surge in the presence of women in the art world in the second half of the 18th century. Women painters were numerous and had careers, notably thanks to the fashion for portraits. Female art critics demands for more equality and visibility, everything was there.

In this context, about a hundred women painters had successful lives and careers. Many of them are in the collections of major museums. But they were not included in the historical accounts. When I discovered the work of these forgotten women painters, I felt great excitement and sorrow too. The sorrow of the total anonymity of these works condemned to secrecy. Not just because of the realization of how the history of Art has made them invisible, but also because of the consequences: when I look at these images, they disturb me and move me above all because they have been missing from my life.


Question: How did you approach the directing issues related to historical re-creation?

Céline Sciamma: A film in period costume seems to require more work than another, enlisting a host of people, techniques, demands, experts and anxieties about re-creation. In reality, it is the same work process. Once anachronism is excluded, we deal with the historical truth of sets and costumes as we deal with reality in a contemporary film. The question remains the same: what imagination is deployed in collaboration with the truth. Paradoxically, of all my films, this is the one where we had the least work to do on the sets. We shot in a château that had not been lived in or restored and whose woodwork, colours and parquet floors had remained frozen in time. This was a very strong anchor and our work therefore focused more on fittings and props, on materials, wood and fabrics. The new challenge for me was the creation of the costumes. Being able to intervene with this level of precision is exciting.

Especially since I wanted one uniform per character, something that Dorothée Guiraud and I focused on. It's a form of tailormade characterization and we have to deal with costume politics more than ever. The choice of cuts and materials – in particular their weight - engages at one and the same time the sociology of the character, historical truth and the performance of physically constrained actresses. I was determined that Marianne should have pockets, for example. For her general attitude, but also because pockets for women would be banned at the end of the century and vanish. I like the idea of this silhouette, so modern, which is rehabilitated as if revived. As soon as I began dreaming about the film, the great challenge in historical re-creation concerned the intimate, the restitution of emotion.

Even though these women knew their lives were marked out in advance, they experienced something else. They were curious, intelligent and wanted to love. Their desires may be part of a world that forbids such things, but they exist all the same. Their bodies become their own when they are allowed to relax, when vigilance wanes, when there is no longer the gaze of protocol, when they are alone. I wanted to return their friendships and questions to them, their attitudes, their humour, their desire to run.


Question: The cast is central to this issue of representation.

Céline Sciamma: The role of Héloïse was written with Adèle Haenel in mind. The character wrote herself based on all the qualities she has demonstrated in recent years. But it was also written with the ambition of giving Adèle a new score. Things we didn't know about her yet. Things that, in some cases, I didn't know myself, even though I had dreamed of them. The role is emotional and intellectual, and because Adèle works with living matter without ever stopping to think about it, she has the power to embody desires and the thought of desires. We worked with great precision on the set, especially on her voice. This collaboration is at the heart of the film, which puts an end to the concept of the "muse" to recount the creative relationship between the viewer and the viewed in a new way. In our studio, there is no muse: there are just two collaborators who inspire each other. 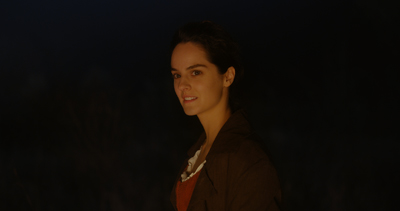 Question: Alongside Adèle Haenel, you have opted for a new face.

Céline Sciamma: A face unfamiliar to me but not that of a beginner. I felt that a first-time encounter with an actress could contribute immensely to the film and the story, especially in the love dynamic. I was keen to create a duo, a film couple that would have its iconic side and therefore its exceptional aspect. Marianne appears in every scene and so it was necessary to have a very strong actress. Noémie Merlant is a determined, courageous and emotional performer. A blend of precision and excess that made the character's invention exciting, gradually revealing itself as we worked. As if this Marianne truly existed somewhere. And I owe a lot of that to Noémie.


Question: This is the first time that you have ever related the experience of love.

Céline Sciamma: It was my initial desire to shoot a love story. With two apparently contradictory wishes underlying the writing. Firstly, to show, step by step, what it is like to fall in love, the pure present and pleasure of it. There, the direction focuses on confusion, hesitation and the romantic exchange. Secondly, to write the story of the echo of a love affair, of how it lives on within us in all its scope. There, the direction focuses on remembrance, with the film as a memory of that love. The film is designed as an experience of both the pleasure of a passion in the present and the pleasure of emancipatory fiction for the characters and the audience. This dual temporality allows us to experience the emotion and to reflect on it.

There was also the desire for a love story based on equality. From the casting stage, Christel Baras and I were concerned about this balance. A love story that is not based on hierarchies and relationships of power and seduction that exist before the encounter. The feeling of a dialogue that is being invented and that surprises us. The whole film is governed by this principle in the relationships between the characters. The friendship with Sophie, the servant, which goes beyond the class relationship. The frank discussions with the Countess who herself has desires and aspirations. I wanted solidarity and honesty between the characters.


Question: How did you approach the issue of painting?

Céline Sciamma: First, there was the decision to invent a painter rather than choose a great inspiring figure. It seemed right to me, in relation to the careers of these women who only knew the present: inventing one was a way of thinking of them all. Our historical consultant, an art sociologist specializing in painters of this period, helped to make Marianne convincing as a painter in 1770 through her reading of the script.

I wanted to show the character at work, with all the different layers. And it was necessary to invent her paintings. I wanted to work with an artist rather than with copyists. I wanted her to be the same age as the character. A 30-year-old painter working today. I came across Hélène Delmaire's work through my research on women painters, which included contemporary works, particularly on Instagram. She had classical training in oil painting and was fairly experienced in 19th-century techniques. As a trio with the director of photography, Claire Mathon, we focused on this dual issue, that of the creation of the paintings and their execution in the film. How to film them and in what time frame. We shot different stages in the work and only in sequence shots. The decision to avoid all dissolves helps form the structure. We chose the real time of the painter's gestures and their rhythm rather than the synthesis offered by editing.


Question: Apart from two musical moments that play a part in the plot, the film has no music.

Céline Sciamma: I had already planned to make the film without music when I was writing. I say this because it was something that had to be thought out in advance. Especially in a love story, where emotion is often musical. We had to think about it in the rhythm of the scenes and their arrangement. You can't count on music to bind them, for example. There will be no emergency or backup melody. We're dealing with total scenic units. To make a film without music is to be obsessed with rhythm, to make it arise elsewhere, in the movements of the bodies and the camera. Especially since the film is mostly made up of sequence shots and therefore with a precise choreography.

It was a gamble, but I did not view it as a challenge. Here too, basically, it is a re-creation issue. I wanted to make music a part of the characters' lives, as a rare, desired, precious, unavailable thing. And so, put the viewer in the same condition. The relationship to art in the film is generally vital because the characters are isolated. First of all, from the world, then from each other. The film also tells us that art, literature, music and cinema sometimes allow us to give full rein to our emotions.