Menzel rose to prominence when she originated the role of Maureen Johnson in the Broadway musical Rent. Her performance earned her a Tony Award nomination in 1996. She reprised the role in the musical's 2005 film adaptation. In 2003, Menzel originated the role of Elphaba in the Broadway musical Wicked, a performance for which she won the 2004 Tony Award for Best Actress in a Musical. Menzel returned to Broadway as Elizabeth Vaughan in the 2014 musical If/Then, which earned her a third Tony Award nomination.

Additionally, Menzel is known for portraying the role of Shelby Corcoran on the musical dramedy TV series Glee from 2010 to 2013 and Nancy Tremaine in the 2007 Disney live action/animated film Enchanted. She also voiced Queen Elsa in Walt Disney Animation Studios' hit 2013 3D computer-animated musical film Frozen, in which she sang the Oscar- and Grammy Award-winning song "Let It Go". The song reached number 5 on the Billboard Hot 100 chart, making Menzel the first Tony Award-winning actress to reach the top 10. She ultimately won a Grammy award for the film's soundtrack. Her album Holiday Wishes was released in 2014 and reached number 6 on the Billboard 200 album chart, making it her highest charting album to date. 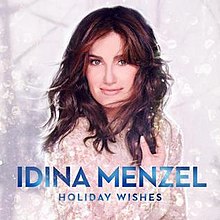 Holiday Wishes, also titled Christmas Wishes, is a Christmas holiday album by American singer-songwriter and actress Idina Menzel. Produced by Walter Afanasieff, it was released by Warner Bros. Records on October 14, 2014 in the United States, and on November 3 in the United Kingdom. It is Menzel's fourth studio album to date, as well as her first in six years, and features a duet with Michael BublÃ©. 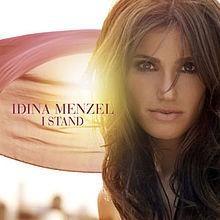 I Stand is the third studio album by American singer-songwriter Idina Menzel and was released on January 29, 2008.

Here is the first EP by American singer-actress Idina Menzel. Unable to find acting gigs, Menzel began recording the album in 1999, but was dropped by Hollywood Records after her previous album Still I Can't Be Still flopped. In 2004, Menzel self-released Here, despite it being incomplete. While Menzel was performing in Wicked which earned her a big rise to fame, she sold copies of the album at the Gershwin Theatre. The album has sold around 2,000 copies and is currently out-of-print.

Still I Can't Be Still

Still I Can't Be Still is Idina Menzel's debut album, recorded and released in 1998. While wowing audiences in the original production of Rent, Menzel was offered a record deal with Hollywood Records. After selling less than 10,000 copies in the US and missing the Billboard 200, Menzel's label put the album out of print, and she was dropped from the label. However, demand for the album grew significantly after Menzel rose to a greater fame with her Tony-winning performance in Wicked, and was subsequently re-released in September of 2005.

Still I Can't Be Still Tracks