Exciting newcomer Brigitte Bardini schools us on ethereal wave with her atmospheric debut single, Aphrodite, released June 5th. The track is accompanied by a dreamy video by Ayush Negi that was masterfully filmed through water to pull off a fittingly 90s alt indie vibe.

This introspective track is dream pop at its finest. Aphrodite will swiftly hijack your attention - its intricacies will draw you in and allow you to discover more with each listen, whilst further propelling the mystery of the artist. Dark, moody and oozing effortless cool, this song is for fans of PJ Harvey, Portishead and Bjork.

Written and produced by Bardini who plays every instrument on the release, Aphrodite was recorded at Toyland studios and engineered and co-produced by Adam Calaitzis (who also tracked some synth bass for the song). "This song is themed around temptation and its repercussions," explains Bardini. "It is a lesson of knowing your place in someone's life isn't as much of a priority as you might wish, but accepting this truth rather than expelling it."

Directed by Bardini and Ayush Negi, an aspiring filmmaker from India, the video clip was inspired by the lyrics of the song that are centred around references of ancient Greek mythology, 'sirens' and 'Aphrodite'. Filmed during isolation and drawing on DIY tricks and lessons from films, Negi was able to form an innovative approach to creating the video's psychedelic, otherworldly, underwater feel. Bardini insights, "I wanted to create a film clip that immerses the viewer into this world of a goddess being beckoned, almost taking you underwater to Aphrodite's birthplace."

The abstract, alt pop artist from Melbourne who is just twenty years old and has put her psychology degree on hold to pursue a career in music, says she is a little daunted to be releasing her debut single out into the world for public opinion, but is "mostly excited to see how people receive the song with fresh ears." And she wasn't going to let these strange Covid-19 times put her off. "Music is always around and I look to it in trying times as well as the good times so I didn't even second guess following through with the single release and dropping the album," Brigitte explains, "It's something that I feel not only other people may need, but selfishly I need a purpose now more than ever."


Question: Can you tell us about Aphrodite?

Brigitte Bardini : Aphrodite was in the first handful of songs I'd ever written. It was written in 2018, being the year I picked up guitar, and I can distinctively remember sitting dad down to listen to the home demo in the living room and the look of excitement he had after hearing it. Knowing this one had something was very encouraging and undoubtedly pushed me to write more and improve leading to the creation of the rest of the forthcoming album. 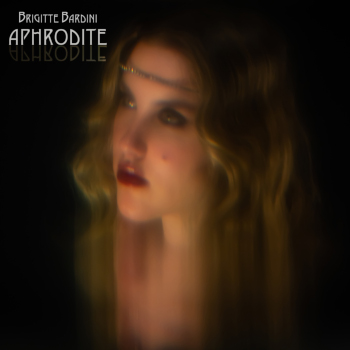 Brigitte Bardini : Aphrodite is a song based around the theme of temptation hence the reference to 'sirens' associated with the Greek myth of mermaids luring nearby sailors leading to their eventual shipwrecks. It's about knowing that someone wouldn't be there when you most need them but accepting and maintaining the friendship/relationship as the good still outweighs the bad. This feeling of unrequited love is the reason why the Greek goddess, 'Aphrodite' is beckoned within the lyrics.

Brigitte Bardini : I wouldn't say there's one specific message but I'd hope that people recognise truths in the music. I find that even as the writer I can recognise truths in it when I've stepped away from it for some time or am listening to it through a different lens so I hope this could somehow be achieved through someone else.

Brigitte Bardini : I haven't performed live just yet but super excited to be able to answer that question one day.

Brigitte Bardini : I find I need to write music when there's something externally or internally that I find I need to release or resolve in some way. Therefore I find myself most motivated when there's something I need to articulate through a song that I can't just voice in a simple sense in conversation. Jeff Buckley is one of my favourite musicians and a huge inspiration of mine and I remember him saying in an interview, and I paraphrase here, that music is a language and a way of communicating the things that can't simply be said and I absolutely resonate with this.

Brigitte Bardini : It's difficult to narrow it down but currently I find myself listening to a lot of Goldfrapp, Oasis, especially their album 'Standing on the Shoulder of Giants,' Crazy Penis and The Chemical Brothers, who come under my huge love of trip hop.

Brigitte Bardini : Jeff Buckley and PJ Harvey were the two artists who really made me feel that I needed to start learning guitar and are also huge inspirations of mine. I then starting to try my hand at writing and finished a 14-track demo, which I sent to Simon Rashleigh, whom my dad had met by chance over a dinner event. I'm super lucky to now call him my manager.

Brigitte Bardini : Air is a French band that does incredible, mostly instrumental, tracks. They also do features where artists like Beck and Jarvis Cocker have sung on their tracks. So basically, this would be a dream.

Brigitte Bardini : My pre-conceived idea was that the music industry seemed like a distant world but I now realise that it's a lot closer than I thought.

Brigitte Bardini : Not at all, I think it's what I'm best at and love so it's something that I feel I have to pursue no matter what.

Brigitte Bardini : Well lately since iso has been around it's been a bit of writing or messing around on instruments, lots of emails being sent, going for a walk with a friend and working on completing whatever's at hand at the time.

Brigitte Bardini : Writing music is the absolute best part and being able to have the freedom to follow my vision because of the great team I have around me has made things so much more fulfilling.

Brigitte Bardini : If everything goes to plan, hopefully the album is next to come out.