The bushfires in Victoria have claimed more than a thousand homes and we have a death toll nearing 200 with more expected as authorities enter ruined towns. With fires already burning, conditions on Saturday made it worse. Black Saturday, Saturday the 7^th of February was the hottest day on record, the temperature reached 46.4 degrees Celsius meaning many residents didnt stand a chance due to extreme hear and strong winds. Hundreds of fires burn out of control, leaving only destruction, emergency services where stretched to the limit.

With so many Australians lost and towns devastated what could possibly make it worse? The facts that authorities suspect arsonists are responsible for many of the fires, many of which are still burning, some out of control.

Naomi Dubbeld from Labertouche, Victoria tells her story as the fire, which began in the Bunyip State Forest and progressed to Labertouche to threaten her home, business and land.

What were your experiences with the latest Victorian fires, Black Saturday?

Naomi Dubbeld: The fire tore right through our place, we had watched it carefully all day but as soon as the wind picked up we were in the direct path of it. Nothing was stopping it and I have never been so scared in my life. It destroyed 90% of our land. The fire helicopters bombed our land with water three times, to save our house.


Where do you live?


Did you have any warning?

Naomi Dubbeld: We were warned, at local meetings, on the Friday before that the fires may get out of control and were told to prepare for the worst case. The DSE and CFA were brilliant with preparing and warning everyone in our community. 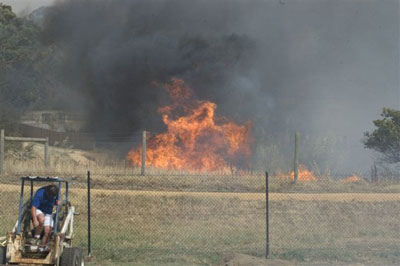 Did you save all of your animals?

Naomi Dubbeld: We run a dairy farm and managed to get all of our stock off and save our pets as well.


Did you have a fire plan? If so what was it?

Naomi Dubbeld: As a household we had never really discussed a fire plan but after Fridays meetings we put one into action quickly.
We packed our valuables and important documents into the cars and moved the larger of our dogs to another farm. We had cattle trucks on standby if we needed them, which we did. We flooded our gutters, hooked up all of our water pumps and generators and started irrigating around the houses and dairy, this continued from Friday afternoon, into Saturday. All of our vehicles had full tanks of fuel the engines had been checked to ensure we could get out when we needed to. We were ready to go if the worst happened.


When did you leave?

Naomi Dubbeld: We started loading out cattle at about 5:30am and we were all leaving by about 12:30pm. It was such a long process. Although we were told to leave by 7am if we were going to leave, unfortunately we were not ready.


Did you always plan to leave? Did you think about staying?

Naomi Dubbeld: We considered staying, more because we didnt think the worst. We had heard all the warnings but everybody was thinking it couldnt possibly get as bad as that. If we stayed, it would have only been to protect the stock; we had no intention of staying once they were gone. But we were always ready to go if it came to that.


How do you feel hearing that arsonists may be responsible for lighting the fire that threatened your home?

Naomi Dubbeld: It does make me angry that these people can take so much from others so easily. We are now without enough feed to run our farm because someone decided it would be fun to light a fire. Its not at all funny when people have to suffer and even die because someone wanted to get a quick thrill. 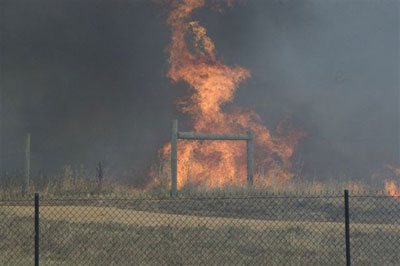 What were you unable to save, possessions wise?

Naomi Dubbeld: We were very lucky we had so much time to get what we could. Things like photos and insurance papers were packed first and after that anything that would fit went into the cars. Its so hard to pack in that situation though, it made me realise how materialistic I am. Things that can be replaced dont matter but when it comes down to choosing, its so hard.


What do you think about the government ignoring fuel issues?

Naomi Dubbeld: So many lives could have been saved if back burning and forest burns were a regular occurrence. If the undergrowth was cleared regularly by low intensity, controlled burns then we would not have such an issue with these devastating, high intensity fires.


Does it make you feel happy you are a Victorian because of the way the communities have bonded through this tough time?

Naomi Dubbeld: We have had so many calls, texts and offers of help it is amazing. Im so grateful to everyone who has helped and still is helping. Because of generous donations, we are able to get clean water to drink and hay to feed our stock. The generosity of this country is wonderful.


What helped you through the hard time, of the fire?

Naomi Dubbeld: The love and support of my beautiful family and friends. I had reassuring text messages and phone calls all day and without them I would have been more of a mess than I was.


Victoria has pulled together, in this time of need, by the 13^th of February, $77 million had already been raised for The Red Cross and that isnt the end of it. With fundraisers still occurring and shops still sending proceeds from purchases it shows how caring Australians and those overseas who have contributed are. International actor Orlando Bloom was in Australia to see girlfriend, Miranda Kerr, and helped answer phones on Channel Nines, Australia Unites telethon. Whilst Australian artists, Jimmy Barnes, Shannon Noll and Kate Ceberano performed in a concert to raise more funds for those affected by the bushfire crisis. 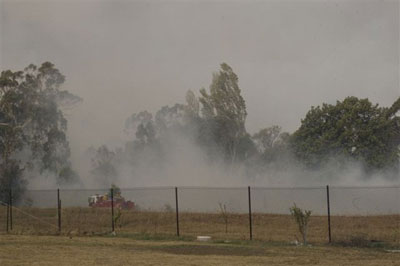 Fox Fm and Triple M joined forces to generate funds and Coles dedicated a day for all their proceeds to go to The Red Cross appeal. Australian Nicole Kidman and partner Keith Urban donated $500,000 to the appeal via satellite. Anthony Lapaglia and his wife, also an actor, Gia Cardies donated $50,000 as did Michael Buble.

The Government has set aside money for those who need assistance and have been immediately affected from $22,000 grants for those who have lost their homes to $400 per child for emergency relief.

Vinnies is taking donation for the Victorian Disaster Appeal at Vinnie Centers across Australia. The St Vincent de Paul Society is taking financial donations to help in the long-term recovery efforts of the communities devastated by the fires. In addition to this Vinnies are also taking donations of material goods through there centres. Materials needed at the moment include shampoo, conditioner, deodorant, baby formula, baby bottles, baby dummies and underwear and socks.

Donations can also be made at any of the major banks: Commonwealth, Westpac, National Australia Bank, ANZ, Suncorp Metway or Bank of Queensland. Alternatively you can call on 1800 811 700 with your credit card details.

Blood supplies in Queensland and Victoria are also short and will be needed now and in the future. Go to www.redcross.org.au for more information.