A new study into exercise has revealed the unhealthy impact of anxiety on the overall wellbeing of Australia. New consumer research released today by Curves Australia concludes Aussies are failing to exercise for fear of being judged over their appearance, ability and dress sense.

The survey of over 1,200 Australians and New Zealanders has unearthed a severe anxiety complex with almost half (46%) of Aussies admitting to experiencing gym-induced anxiety. Over a third of men and women (36%) admit that anxiety has prevented them from ever stepping foot inside a gym, and over two thirds still avoid going today.

Barriers identified in preventing Australians from exercise in public included, fear of being hurt (63%), wearing unsuitable gym attire, (50%) and not looking good in gym gear while working out (53%). '

Once at the gym, the main course of anxiety during a work out is looking "silly in front of other gym goers" in NSW, VIC, QLD and SA. With WA and ACT bucking the trend and polling strong on not knowing what to do with the equipment. Those in NT found the crowds confronting and those surveyed in Tassie felt the pressure to look good in gym gear as the strongest fear around public exercise.

Clinical Psychologist Bernadette Bywater said, 'The research shows how dominant a role anxiety now assumes in the way we approach health and wellbeing. Fear of Judgment has been the main attributing factor to the rise in gym related anxieties. Most concerning is the impact we're seeing in the younger generation, 18-24 year olds are most prone to gym induced anxiety. '

Bywater continues, 'Current media and celebrity status are all contributing factors to the constant pressure among young people to look a certain way. '

Further findings confirmed females are 56% more likely than males to experience anxiety about attending a gym and 38% more likely to label themselves as a gymphobes compared with men.

Committed to strengthening women Curves Australia is encouraging ladies to take a positive step forward to a healthier lifestyle. Known for its unique 30-minute total body workout the women's only gym will be launching Australia's first gym therapy classes to tackle -Gymphobia'. 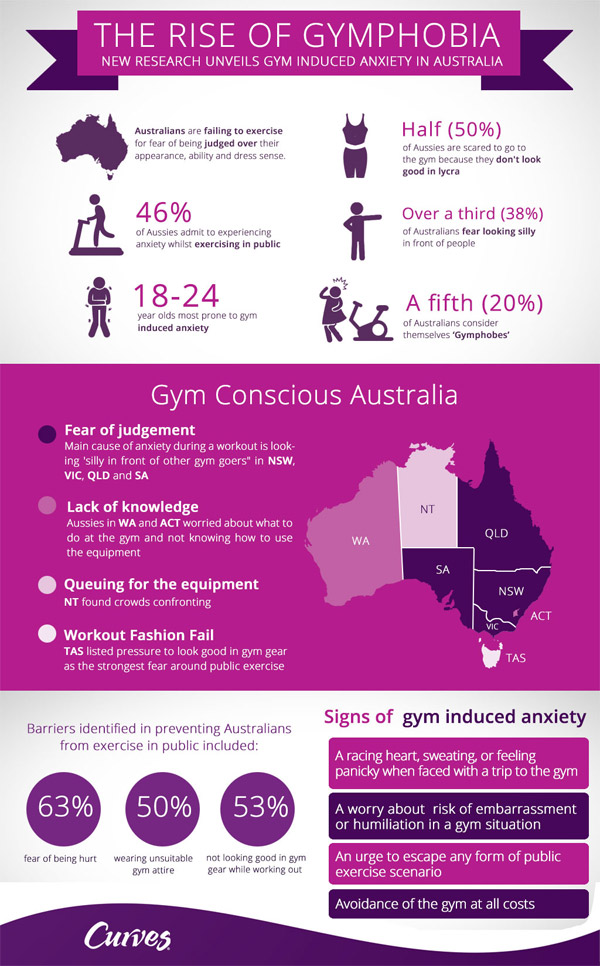 Selina Bridge, Marketing Manager, Curves Oceania says 'We've seen a high level of members who have been affected by some form of gym induced anxiety in the past. Our clubs have been designed to assist in making their transition back (or for the first time) into group exercise a liberating one. We pride ourselves on personal service."

Curves Australia will be offering the first gym therapy classes this winter for members of the public suffering from Gymphobia, The classes will provide tips for dealing with gym induced anxiety with the aim to re-introduce Australians to a healthy lifestyle and most importantly rediscover self confidence.

Bridge continues 'with a Curves Coach on hand at every circuit to teach and motivate, this is important to ensure that each member is confident using the equipment but also feel less self conscious and more included. There have been some inspirational fitness journeys from women of all sizes and ages that have thrived in the unique and supportive community of women that Curves Clubs foster. '

Bernadette Bywater: The word phobia simply refers to an intense fear about something in particular. So for Gymphobics, that fear is about going to the gym.

Fear of the gym can range from a mild worry to a more intense fear that causes significant distress and prevents people from attending the gym at all. 36% of women have reported that their fear of the gym has been so intense that it has prevented them from ever having attended a gym.


Question: Is Gymphobia a new term?

Bernadette Bywater: Research into fear of the gym has been around for some time and given the urgency around getting people to be more active for their health, any investigation into the blocks that people face to becoming more active is an area of interest for researchers.


Question: Are you surprised by results of this Curves Australia study?

Bernadette Bywater: It is quite surprising that nearly half - 46% of Australians felt anxious about exercising in public. The levels are high considering the clear benefits of activity and keeping a healthy weight range for overall health. Most people were concerned about looking silly, or being judged for their appearance in some way. 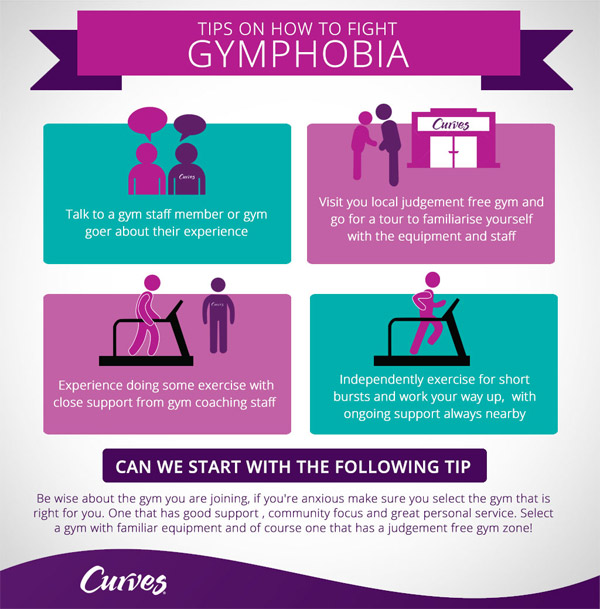 Question: What are the symptoms of gym-induced anxiety?

Bernadette Bywater: Gym induced anxiety can range from mild worry about going to the gym, to a more intense fear of the gym that actually prevents people from entering into a gym environment to exercise.


Question: What advice do you have for females who don't go to the gym in fear of being judged over their appearance, ability and dress sense?

Bernadette Bywater: It is important for women to be clear about their values around good health and how important it is for them to be exercising. Remembering that you are there to get fitter and stronger and to stay focused on those goals as opposed to just focusing on appearance. It is useful to choose a gym environment that is likely to be a good fit for someone who is a bit more self conscious. A gym environment that is welcoming, inclusive and provides exercise that is closely supervised will be the best fit for someone who is anxious. It can be useful to attend initially for a look around the gym or to take a friend for the first visit and to make sure that staff are there for ongoing support.


Question: When is gym-induced anxiety most common?

Bernadette Bywater: Gym induced anxiety is most common in the 18-24 year old age groups when there tends to be greater emphasis on appearance generally.

However some older people are also anxious about to the gym, but their anxiety tends to be focused on exercising safely and effectively.


Question: How is Curves approaching Gymphobia?

Curves : Curves Australia is excited to soon announce Australia's first gym therapy classes to re-introduce women to a healthier lifestyle – one off classes happening this winter. The classes will provide tips for dealing with gym induced anxiety with the aim to re-introduce Australians to a healthy lifestyle and most importantly rediscover self confidence.

'We've seen a high level of members who have been affected by some form of gym induced anxiety in the past. Our clubs have been designed to assist in making their transition back (or for the first time) into group exercise a liberating one. We pride ourselves on personal service."

Curves will continue to provide a Curves Coaches on hand at every circuit to teach and motivate, this is important to ensure that each member is confident using the equipment effectively but also feel less self conscious and more included