Synopsis: In 1953, a heavily pregnant Rosalba Cavelli is found under duress, lying on the floor in her family pastry shop. As fate would have it she is found by Joe and Maria Prima, customers who quickly come to her aid and rush her to hospital. Just in time to give birth to a healthy baby girl, Angela.

Rosalba's husband, Sal, is eternally indebted to Joe and Maria, who become Angela's godparents. The Prima family is a well established and respected - albeit 'connected' family with long established mafia ties.

Both families become close friends. The Primas have two young boys, Robert and Tony. When five-year old Robert comforts newborn Angela, their fathers, inspired by the gesture, shake hands and decide to promise the children to each other in marriage.

Problem: Angela has a boyfriend, a dashing and charming young man named Tom. On learning about Tom, Sal convinces himself he is not suitable for his daughter and insists she marries Robert.

Robert goes along with the idea despite knowledge of Tom. This infuriates Angela who thinks Robert can't stand-up to his imposing father, shattering her romantic ideas of being swept away by the man of her dreams. Angela's fury quickly turns to fear for Tom's safety, at the hands of Robert's connected family and reluctantly agrees to marry him.

Once married, a considerate Robert begins to charm Angela. She also learns of Tom's hidden, imperfect past. Gradually, she begins to fall in love with Robert but on the eve of consummating the marriage events collide: secret lies, the return of Tom and the revelation that Robert is having an affair with his sultry secretary, create havoc and everything seems lost.

...And we learn - love like life is never perfectly arranged

Question: Can you tell us about Promised?

Antoniette lesue: Promised is about two young Italian/Australians who are promised in marriage by their fathers in 1953. Fast forward to 1974, and Angela is now 21, studying English literature at Melbourne University and Robert, now 25, has just returned home from studying law abroad at Oxford. The film follows Angela and how she navigates herself through the 'Promise' as a woman in the ever changing 70's while being involved with another man and follows Roberts journey as he tries to uphold his family traditions despite changing times. 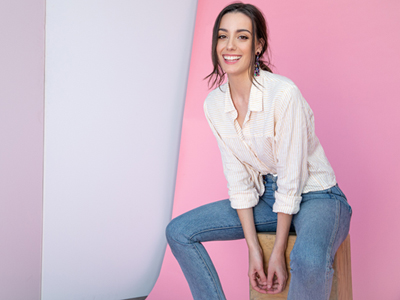 Question: What message do you hope Promised spreads to audiences, in Australia?

Antoniette lesue: I hope that this film sparks a conversation on the importance of understanding the people that have come before us; their ideals and traditions, what they meant to them, and how it's shaped our community today. Another key message I hope the audience take away from the film is one of love – following your gut and what it is you want. We often get caught up in what our family and friends think is best for us and I love the way Angela makes choices that are completely right for her.


Question: What originally drew you to audition for the role of Angela Cavelli in Promised?

Antoniette lesue: I think Nick Conidi (Writer/Director) did a fantastic job at writing a female role with such resilience and strength. I love how opinionated, smart and thoughtful she is.


Question: How are you similar to your character of Angela Cavelli?

Antoniette lesue: We both love reading and writing and are both very opinionated when we feel its validated. I think our love for family is very similar as well.


Question: What did you learn about yourself whilst playing the role of Angela Cavelli?

Antoniette lesue: I think Angela allowed me to find my voice as a young woman and especially my voice as an Italian/Australian woman. For a very long time I put my culture and heritage to one side, not because I was ashamed but because I didn't think it was as important in shaping who I am. Through this film and this character, I realised just how important it was and for that, I'll always be grateful to Angela.


Question: What was the best and most difficult parts about being on set for Promised?

Antoniette lesue: The best parts about being on set for Promised was being on set all day every day! I felt so lucky to be able to live and breathe on set for 3 months straight! Honestly there weren't many difficult parts at all. The crew and cast were so supportive. We had a few crazy early morning starts – I'm talking 3am wakeup calls haha! – so I guess that was the most 'difficult' part.


Question: What was it like working with Paul Mercurio and Tina Arena on Promised?

Antoniette lesue: It was an absolute blast! Paul would bring all his homemade treats in for lunch and Tina wouldn't stop making us giggle on set. She has such a quick-witted sense of humour and I really enjoyed getting to know that side of her.


Question: When did your passion for acting first begin?

Antoniette lesue: I've been singing and dancing for as long as I can remember but acting for me came later in life while I was studying at WAAPA. I was about 19 when I started fully immersing myself in it. I quickly became obsessed and that's what lead me to move to LA.

Antoniette lesue: I have another project that I've wrapped on and is under way but I can't say too much until it has a release date! I'm also enjoying some much-needed family time in Melbourne while I'm here promoting Promised.