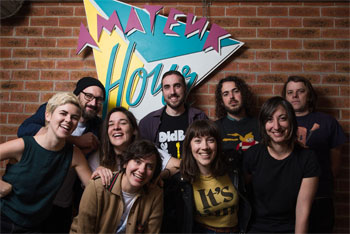 Amateur Hour, a DIY variety show created by Laura Imbruglia & friends, is back for a second season! They've been teasing their beloved weekly bites of music, comedy and arts-centric interviews since October but will now finally be compiling these, along with much more unseen content into a season of seven x half hour episodes.
Filmed in Melbourne and Sydney with Laura as the host, the show has enjoyed growing popularity for its lovingly curated selection of diverse musical guests (emerging & established), charming lifestyle segment (hosted by LJ (Laura Jean), insightful interviews with creatives, and hilarious comedy sketches, often starring well-known musicians in acting roles (the wildly popular 'Gender Reversed Guitar Shopping" skit may ring a bell). A quick scan over the star-studded trailer reveals appearances by artists as diverse as Olympia, Camp Cope, The Laurels, actors Candy Bowers and Ash Flanders, comedian Zoe Coombs Marr, plus animations and much more.
Laura has rounded up her favourite musicians, visual artists, actors and comedians and asked them to appear on, or contribute content for the show. This is a unique arts & culture show created by the artists of Australia.
The background of the show goes as follows - In late 2014, Laura posted on facebook that she was fed up with the lack of Australian variety shows and was going to make her own show (despite having no tv production experience) if anyone wanted to join her. To her surprise, she quickly amassed a crew of 50+ volunteers across many disciplines and 5 cities. Whilst Season 1 was created entirely by volunteers, public interest in Season 2 generated 50k in grants and crowd funding prior to production. Amateur Hour - the little engine that could.
Gone are the days of watching your favourite band whittled down to just acoustic guitar and vocals, mixed terribly and interviewed by a morning television host who cares little about their craft. No longer will you scour the net looking for a British or American comedy fix, cos Australian TV is simply not cutting the mustard. Amateur Hour is here.
Season 2 arrives Friday June 30.
Seven x half hour episodes for your viewing pleasure.

Watch the trailer and subscribe to stay in the loop.