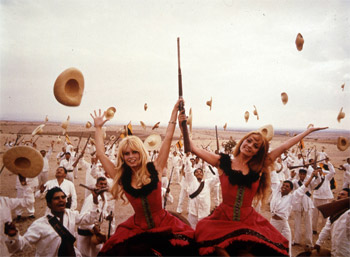 The Alliance Française Classic Film Festival is proud to announce that following the success of last year's inaugural event in Sydney, it will now become a national festival.

Alliance Française will present with STUDIOCANAL and in association with Palace Cinemas, this exciting complement to the renowned Alliance Française French Film Festival, taking place from late August onwards in Sydney, Melbourne, Canberra, Brisbane and Perth. The annual Alliance Française Classic Film Festival aims to rediscover masterpieces of French cinema, highlighting a talent, actor or director who has made an indelible contribution to France's celebrated film industry.

'Les Blondes" is the theme for the second edition of this Festival, celebrating 5 emblematic actresses in iconic French films from 1952 to 1975: Brigitte Bardot, Catherine Deneuve, Jean Seberg, Romy Schneider and Simone Signoret.  Decorated figures of French cinema, with a certain je ne sais quoi, these iconic blondes collectively garnered a myriad of Césars, Oscars and other awards for their performances and films; each artiste is a revered symbol of French culture whose talent and presence has reverberated far beyond the confines of cinema.

Considered great actresses of their eras, these 'Les Blondes" are internationally recognised and renowned. Catherine Deneuve was selected by the European Film Academy to receive a Lifetime Achievement Award, Simone Signoret was the recipient of multiple Oscars, Romy Schneider was the inaugural winner of the Best Actress César in 1976, Jean Seberg immortalised La Nouvelle Vague in cinema and style, and Bardot's status as a global icon of beauty continues to be celebrated by a number of art and fashion institutions.

Between romance and drama, comedy and adventure, experience these films as they were meant to be experienced on the big screen. Rediscover the classic splendour of 'Les Blondes" in the company of performers Yves Montand, Jean-Paul Belmondo, Jeanne Moreau, Serge Reggiani, and Isabelle Huppert.

The Festival will showcase 5 films in 6 cinemas to across 5 Australian cities, encompassing 30 sessions, including an Opening Night event in each city.

Dates and venues for the 2016 Alliance Française Classic Film Festival are:

Festival schedule and tickets available from 28 of July at: http://www.afclassicfilmfestival.org