Written and Directed by Rachel Hirons

Synopsis: Laura and Ryan are perfect for each other: they both love Meryl Streep, have been totally destroyed by previous relationships, and they have no idea what they are supposed to do tonight. They also both know that they'll have to pretend to be completely different to how they've ever been previously, in the hope of getting it right this time. How bad can a second date really go and what is there to lose? Ryan and Laura are about to find out. 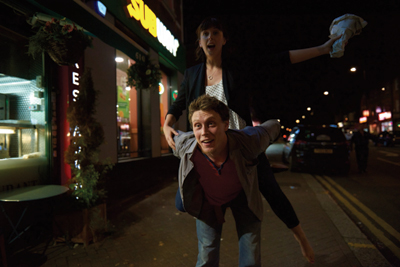 In many ways, A Guide To Second Date Sex is an anti-rom-com. We all know "real sex isn't like in the movies". There's no perfectly choreographed routine, littered with gentle caresses and constant sexy moans culminating in a simultaneous explosion that heralds a sexual reawakening for everyone involved. At least not in my bedroom. Getting naked and swapping bodily fluids with someone new for the first time is a messy, anxiety-riddled and generally disappointing experiment laced with apologies, misunderstanding and dry mouths. And that makes it innately funny and far more entertaining. The intention behind A Guide To Second Date Sex was to create a film that shows this reality and allows us to recognise and laugh at ourselves and each other.

I wanted it to feel real, relatable and a rough around the edges. As a first-time director, that last element sorted itself out… the real and relatable aspects were mainly down to George and Alex who totally got what we were trying to do from the beginning and were both so utterly fearless, shameless and game for anything throughout. Working with a first-time director must be a risk for any actor in any movie, let alone one where they spend most of their time in underwear performing ill-conceived sex acts. I remember being terrified to approach the sex scenes and deliberating over how I was going to phrase certain things to "take the edge off". It was in one of these verbose speeches that Alex cut in with "shall I just go on top and ride him and he can grab my tits?" that just totally cut through the crap and allowed everything to be so fun and laid back, which was a life-saver given that we were often filming 5 to 6 scenes a day and had no time for delicacy.

A three-week shoot meant everyone was operating at 100 mph the entire time and the crew (of equal male and females!) pulled off miracles. Many people, like myself, were doing that job for the first time, including our production and costume designer, so everyone threw everything at it. There was a moment when what was planned as a static shot of someone on a sofa changed at the last minute to a tracking shot around the whole room. The art department worked all through the night, and with about £30 they turned an empty room with a sofa in it into a fully furnished studio flat. It was insane. 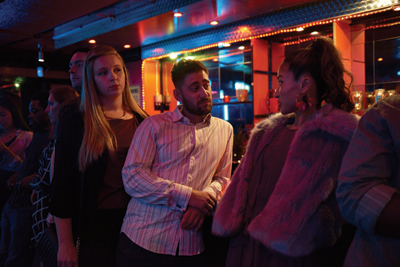 95% of the movie is shot in a terrace house – which we filmed on location in the arse-end of London. With everyone crammed into such a small space, I was aware that the relentless stress and claustrophobia could easily lead to a sour and monotonous work environment, but everyone involved – with a special shout-out to our first AD – went out of their way to keep morale up by cracking jokes. The last day felt more like a house party than a film set.

The first time you do anything, you're going to make mistakes and of course I made plenty. The tight time frame and my inexperience sometimes meant I compromised where I shouldn't have or didn't get enough coverage (a proper rookie mistake in a large part owed to my initial belief that a 'one shot' was the pinnacle of cinematic achievement!). That said, I couldn't be prouder of what everyone achieved and the fact that this film exists. If the goal was to disprove the notion that "real sex isn't like in the movies", we certainly did that.
– Rachel Hirons